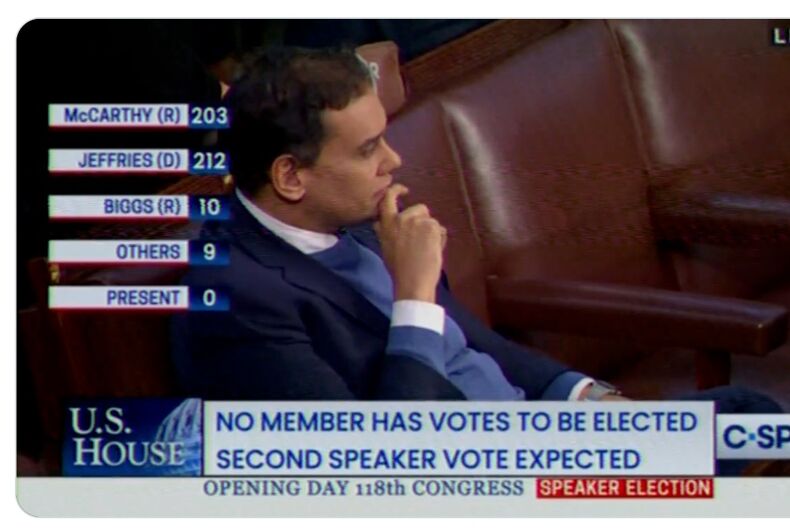 A circulating video purportedly shows dishonest gay Rep. George Santos (R – NY) doing an interview in drag. If the video is of him, it could make him possibly the first-ever drag queen to serve in Congress, which is progress… sort of.

Though Santos has denied ever wearing drag, numerous photos and one video have recently surfaced that claim to show him in drag. As new images continue to surface, Santos has said that Republicans are flooding his inbox with hate mail for his gay identity.

The video in question, first posted in 2013, allegedly shows Santos wearing drag during a 2005 Pride parade in Niteroi, Brazil, a suburb of Rio de Janeiro.

The low-quality video is pixelated, making it difficult to tell if the queen in it is Santos. However, the queen and Santos seem to have similar facial shapes. Also, the queen in the video seems to be wearing the same sunglasses and fishnet face covering as the individual pictured in another image that social media users say is Santos.

The right-wing watchdog Twitter account PatriotTakes also posted an image that purportedly shows Santos in drag. The image was shared by Eula Rochard, a 58-year-old drag queen in Brazil who says she knew Santos (who was going by the name Anthony at the time) back when he did drag under the name Kitara Ravache.

The person in the photo and their outfit are similar to a 2008 photo that Rochard shared with investigative reporter Marisa Kabas.

“The important context here is that Santos ran as a far right candidate, and continues to align himself with transphobes/homophobes who target drag shows with violence,” Kabas wrote about the significance of Santos’s alleged drag past. “Drag is beautiful. Hypocrisy and anti-drag/anti-trans bigotry are not.”

Reuters has since spoken to another friend of Santos from his time in Brazil who said that Santos competed in drag pageants in Brazil. The friend, who didn’t want to be named in the media, said that Santos wanted to be Miss Gay Rio de Janeiro.

Rochard told Reuters that Santos was a “poor” drag queen in 2005 when he started, only able to afford a black dress. But “he came back to Niterói with a lot of money” in 2008 and wore an extravagant pink dress. He competed in a pageant that year, she said, but he lost.

“He’s changed a lot, but he was always a liar,” she said. “He was always such a dreamer.”

NEW: I just spoke by phone with Eula Rochard, a Brazilian drag queen who was friends with George Santos when he lived near Rio. She said everyone knew him as Anthony (*never* George), or by his drag name, Kitara, and confirms this photo is from a 2008 drag show at Icaraí Beach. pic.twitter.com/1MeeDR1O2O

Santos has also said that far-right Republicans have been sending him hate mail because he is gay.

“I was trashed via inbox by #MAGA people telling me they HATE me because I’m #GAY,” Santos wrote in a January 11 tweet. “Sorry but I’m more of a patriot than any of you haters, It takes a real patriot to recognize what happened in the capitol was WRONG! To my supporters THANK YOU 4 the LOVE! #USA #Patriots #NoHate 🇺🇸.”

One of the messages Santos received, from a Facebook user named Jenny Batra, said, “As my husband wrote to u before, as a conservative, I am Pro-Life, pro-straight, Etc.. Read the Bible. We are hear to PROCREATE not sin. Homosexuality is a sin, & Marriage is between 1 man and 1 woman. I vote for Christian conservatives not pro-gay RINOS (Republicans in name only). Go run with Bernie, the Democrats are all about fruit loop gay rights and sh*t.”

Santos has aligned himself with some of the most rabidly anti-LGBTQ+ Congress members, including Reps. Lauren Boebert (R-CO), Matt Gaetz (R-FL),  and Marjorie Taylor Greene (R-GA). Republicans and far-right activists have protested drag events and issued death threats against drag performers and venue owners, claiming that drag seeks to “sexualize” and “groom” children into sex abuse and “gender confusion.”

These celebrities came out publicly after 40. It made a world of difference