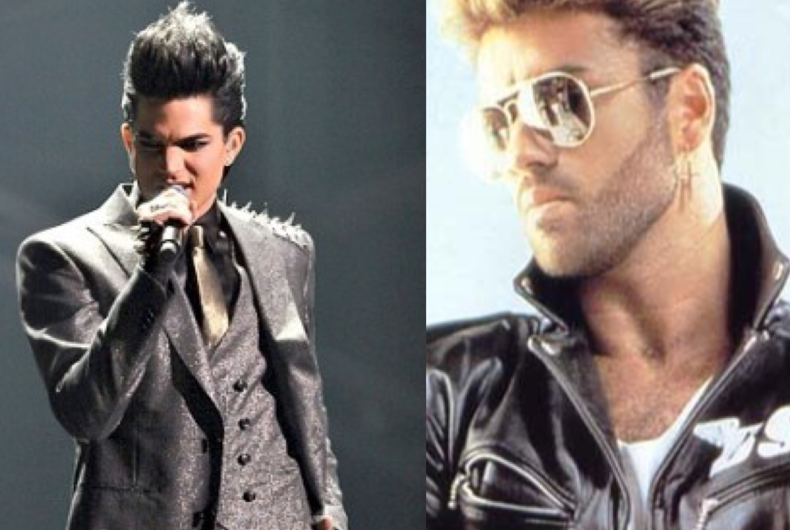 Adam Lambert gave the old social media side eye to the idea of White Lotus star Theo James potentially playing George Michael in a biopic of the late out pop star.

James, it seems, is a favorite to play Michael in a biopic that is reportedly in development, though the singer’s family and George Micael Entertainment have denied any knowledge of the project.

“The script is in the final stages and producers are looking for their leading man,” an anonymous source recently told The Daily Mail. “Theo’s name is the one on everyone’s lips. He would be perfect for the part. This is George’s story, warts and all.”

During a recent appearance on Bravo’s Watch What Happens Live, host Andy Cohen read questions submitted by fans for James. Twitter user @FicusAudrey2 asked whether he would be open to playing the “Faith” singer in the “inevitable” film, asserting that he would “literally be perfect for it.”

like, I don’t wanna brag or anything (j/k, I do ☺️) but I was the one who asked Theo this question pic.twitter.com/wns5ZlzsrM

Of course, in addition to being “a bit Greek,” George Michael was also (more than) a bit gay, and James is… presumably not a bit gay.

That fact seems to be the source of Lambert’s disapproval. Apparently, the singer, who is currently fronting classic rock band Queen alongside original members Brian May and Roger Taylor, has had enough of straight actors landing juicy, Oscar-bait roles as iconic queer rock stars. In recent years, Taron Egerton won a Golden Globe for playing Elton John in Rocketman and Rami Malek won an Academy Award for playing Freddie Mercury in Bohemian Rhapsody.

Lambert has previously expressed interest in starring in a Michael biopic himself.

“That’d be cool, I just feel like, we don’t know that much about him. You know, to me, it would be great to kind of explore George’s life,” he told U.K.-based publication Metro in 2020.

As Pink News reports, George Michael fans were quick to criticize Lambert’s post. But RuPaul’s Drag Race contestant Marcia Marcia Marcia defended his take with their own sharp critique of Hollywood’s marginalization of out actors.

“Seeing a lot of negativity toward Adam Lambert in the responses to this post,” they said in a January 18 Twitter post. “Queer actors are constantly rejected for their queerness while their cishet counterparts are praised for being ‘brave’ for accepting queer roles. Queer people should get to tell their own stories.”

Seeing a lot of negativity toward Adam Lambert in the responses to this post. Queer actors are constantly rejected for their queerness while their cishet counterparts are praised for being “brave” for accepting queer roles. Queer people should get to tell their own stories. https://t.co/KbBPCS9Br0

Does this video prove that George Santos is the first drag queen in Congress?