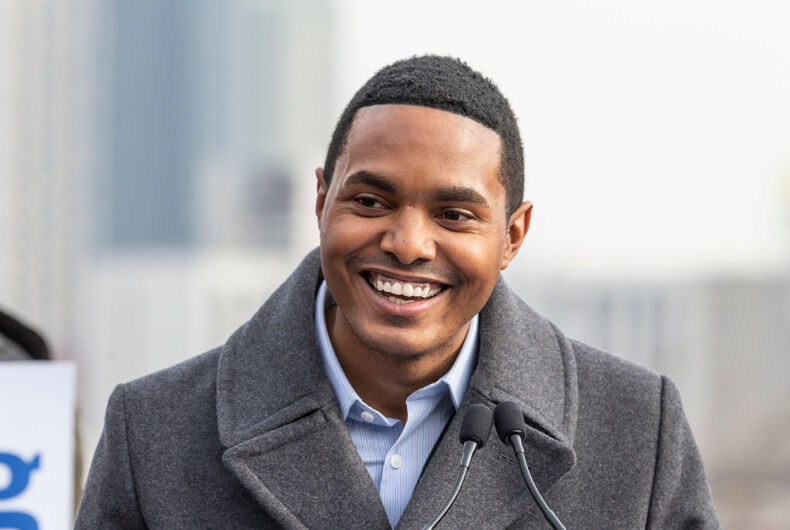 No one has been a bigger critic of out Rep. George Santos (R-NY) ever since he was caught lying about his entire life history than fellow New Yorker and fellow gay Congressman Ritchie Torres (D-NY). And today, Torres announced he is introducing the SANTOS Act, a bill he said “punishes candidates who lie to voters about their qualifications.”

“You can not have a fraudulent candidate have access to information and briefings about national security,” Torres told the Bronx-based News 12. “He cannot be a United States Congressperson.”

“I believe that candidates should have not only a moral but a legal obligation to tell the truth,” he said.

The bill seeks to require House and Senate candidates to provide information about their education, military service, and employment history. It also wants to punish those who lie about their background with a $100,000 fine and/or a one-year prison sentence.

“The web of lies George Santos used to defraud his voters is a threat to our free and fair elections, and we have an obligation to ensure nothing like this ever happens again,” said Goldman in a statement to CBS News. “His entire candidacy for Congress was predicated on a campaign of disinformation designed to deceive the voters.”

Torres also told the outlet that Santos’s “deception is a stain on our Democratic process and threatens to corrupt the very institution in which I am deeply humbled and proud to serve.”

“We must work to ensure that our elected leaders are being truthful and transparent with voters,” he continued, “and I remain as committed as ever to doing just that.”

BREAKING: I am reintroducing the SANTOS Act in the 118th Congress in partnership with Rep. Dan Goldman. The bill punishes candidates who lie to voters about their qualifications.

In December, mere weeks after becoming the first out gay Republican elected to Congress, Santos’s life story came crumbling down. Multiple news reports said that there was no record of him attending the elite high school he said he attended or the colleges and universities he claimed to have degrees from. Citigroup and Goldman Sachs – the Wall Street banks he claimed to have worked for – had no record of his employment. Even his charity “Friends of Pets” was registered nowhere.

Santos admitted to adding “fluff” to his resume but denied criminal behavior.

Then came the accusations that Santos’s 2022 campaign wasn’t following campaign finance rules. In response, Torres and Goldman also hand-delivered a six-page ethics complaint they filed against him this week.

A different ethics complaint was filed earlier this week asking the Federal Elections Commission to investigate how Santos – who declared an income of $55,000 in 2020 – was able to give a personal loan of $705,000 to his campaign in 2022.

This week, the Nassau County Republican Party denounced Santos at a press conference, calling on him to resign from Congress. A large part of New York’s Third Congressional District – which Santos currently represents – is made up of Nassau County.

“I will not” resign, Santos told reporters in D.C. moments after the press conference.