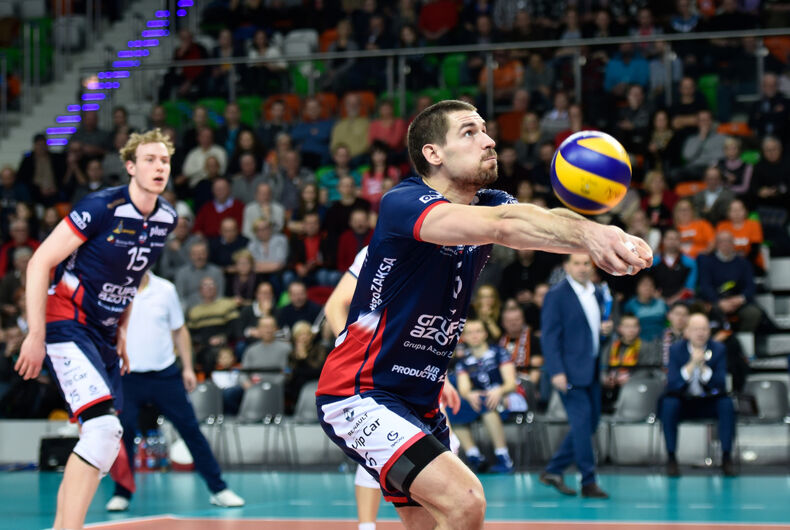 The Nassau County Republican Party denounced out Rep. George Santos (R-NY) at a press conference today, calling on him to resign from Congress. A large part of New York’s Third Congressional District – which Santos currently represents – is made up of Nassau County.

And during the press conference, a new lie just dropped: that he was a star volleyball player at Baruch College.

“I will not” resign, Santos told reporters in D.C. moments after the press conference.

NEW: George Santos tells me he will NOT resign w/ @LaleeIbssa pic.twitter.com/d5rvHObxoA

In December, mere weeks after becoming the first out gay Republican elected to Congress, Santos’s life story came crumbling down. Multiple news reports said that there was no record of him attending the elite high school he said he attended or Baruch College and New York University, where he claimed to have gotten degrees. Citigroup and Goldman Sachs – the Wall Street banks he claimed to have worked for – had no record of his employment. Even his charity “Friends of Pets” was registered nowhere.

Santos admitted to many of the lies, calling them “fluff” on his resume, but he denied criminal behavior.

But while most of his colleagues in Congress appear to be standing by him, Republicans in Nassau County are denouncing him.

“Today I’m calling on George Santos to immediately resign from Congress for the Third District,” said North Hempstead Town Supervisor Jennifer DeSena at the press conference. “The lies George Santos told are too numerous to count. He lied to me personally when he sought my endorsement, and while I’m offended and disgusted at his deceit, my true concern is for the residents of the Third Congressional District.”

“He has betrayed the public’s trust, and given insincere, glib, and insulting answers when asked legitimate questions about his background.”

During the press conference, Cairo explained what he knew about Santos’s resume.

He “said he was very successful, told me personally that he had made a lot of money at that age and was successful in life,” Cairo recalled. “We got into it, started getting personal about the fact that he came from a poor background, but that he was able to be very successful.”

“Told me, I remember specifically, I’m into sports a little bit, that he was a star on the Baruch volleyball team and that they won the league championship,” Cairo continued as Republicans behind him laughed. “What can I tell you?”

Nassau County Republican Party Chair Joseph Cairo says Rep. George Santos (R-NY) claimed he had been a volleyball "star" at Baruch College — which he did not attend — and led his team to a "league championship." pic.twitter.com/fjIp3n1Yo2

Joining many House Democrats in calling on Santos to resign is Rep. Anthony D’Esposito (R-NY), who said today: “At this point I don’t think that George Santos can move forward as a member of Congress… I join with my colleagues in saying that George Santos does not have the ability to serve in the House of Representatives and should resign”

Rep. Anthony D’esposito: “At this point I don't think that George Santos can move forward as a member of Congress"

Rep. Brian Fitzpatrick (R-PA) said he doesn’t “think he should be here, that’s for sure” on MSNBC today. He called for an “expedited review” by the House Ethics Committee, which Republicans voted to gut yesterday.

Journalist Andrea Mitchell said that “if there weren’t such a tight margin and a tight speaker’s vote, he probably wouldn’t have been sworn in,” suggesting that House Republicans care more about power than about Santos’s alleged and admitted lies.

"I don't think he should be here" — Republican Rep. Brian Fitzpatrick on George Santos pic.twitter.com/n6uyUGQQa4