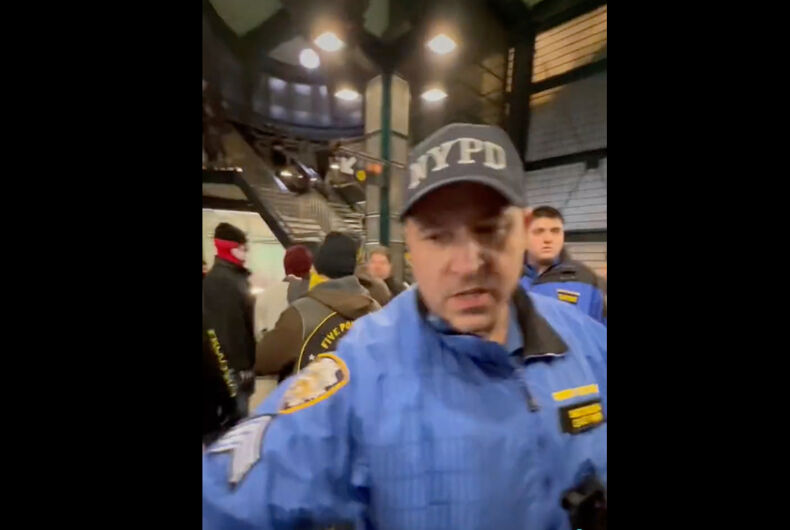 NYPD officer escorts members of the Proud Boys into the subway.Photo: Screenshot

The New York Police Department gave members of the anti-LGBTQ and white nationalist organization Proud Boys a free ride on the subway last week, following a protest that disrupted a drag queen story hour in Queens.

Video of the incident posted to Twitter and TikTok on Sunday shows MTA workers holding an emergency gate open for members of the far-right extremist group at a Jackson Heights station as NYPD officers escort them through.

“Proud Boys don’t have to pay for the fare?” someone can be heard asking in the video.

“We’re special. Thank you. Appreciate it. From your taxes,” one man wearing a “Five Points NYC Proud Boys” vest responds.

“I have to pay for the fare, but they don’t? Is that the situation you’re saying?” the person reportedly recording the video asks an officer wearing sergeant’s stripes.

“That is correct,” the officer responds.

NYPD help Proud Boys commit fare evasion & then tell journalists to go back and pay for the fare. Everyone should see this video. pic.twitter.com/wrkPjFhQoq

According to The New York Daily News, the incident followed a clash between the Proud Boys and counter protesters over a drag queen story hour event on Thursday, December 29, at a Queens library. Police said pepper spray was used by members of both groups during the confrontation.

“To deescalate the situation and prevent further violence a decision was made to escort one group to the Jackson Heights subway station to remove the group from the area,” the NYPD said in a statement released on Monday. “Due to the urgency and rapidly evolving situation, a determination was made to place the group on the subway and remove them from the area before the situation could escalate further.”

New York City Councilwoman Sandy Nurse, who represents Brooklyn’s 37th district, retweeted the video on Monday. “We pay $10 million every month to pay about ~120 private security guards to stand by and prevent fare evasion,” Nurse wrote. “I guess it’s cool for homophobic white men who participated in a violent attempted coup against the nation to evade fares.”

We pay $10 million every month to pay about ~120 private security guards to stand by and prevent fare evasion. I guess it’s cool for homophobic white men who participated in a violent attempted coup against the nation to evade fares. 🤷🏽‍♀️ https://t.co/a2dMkSnGiI

Nurse was referring to the Proud Boys’ involvement in the January 6, 2021, attack on the U.S. Capitol. Five members of the violent, all-male, neo-fascist group are currently on trial, facing charges of seditious conspiracy in connection with the Capitol insurrection.

“Whether it’s a de-escalation technique or not, it’s still symbolic,” Nurse said of the NYPD giving the group free rides. “It doesn’t seem right. It doesn’t seem like our priorities are in place.”

The clash at the library in Queens is just the latest incident in which anti-LGBTQ extremists have disrupted a drag event. Drag queen story hours, which feature performers reading to children, have become a particular focus of conservative and far-right action over the past year. Proud Boys and other extremist groups have been present at many of these protests and disruptions.

Some Proud Boys chapters have also reportedly made inroads to political legitimacy in their local communities through charity work. Sam Jones, the director of communications for the Armed Conflict Location & Event Data Project (ACLED), said last month that this may be a tactic meant to “deepen connections with an existing base in the community, expand local networks, recruit, and draw lines separating the potentially allied in-groups they aim to ‘protect’ from the demonized out-groups that they target.”

Video from a protest outside a Columbus, Ohio church where a drag queen story hour was scheduled to take place last month showed one police officer high-fiving a member of the Proud Boys.