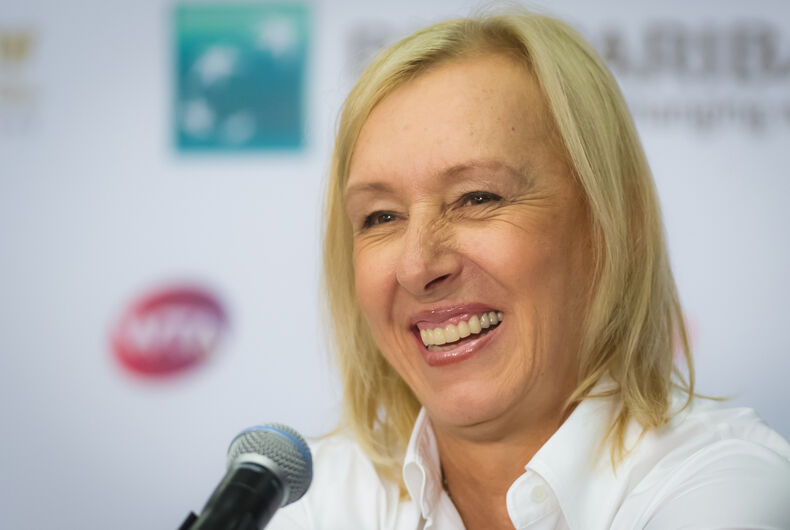 Martina Navratilova has been diagnosed with throat and breast cancer. The out tennis champion made the announcement on Monday via a statement, saying that her prognosis is good and she will begin treatment this month.

“This double whammy is serious but still fixable, and I’m hoping for a favorable outcome,” Navratilova, 66, said. “It’s going to stink for a while but I’ll fight with all I have got.”

According to the Associated Press, Navratilova said she noticed an enlarged lymph node in her neck while attending the season-ending WTA finals in Fort Worth, Texas in November. A biopsy showed early-stage throat cancer, and while she was undergoing tests on her throat the unrelated breast cancer was discovered.

According to the statement released by her representative, Navratilova will not be a regular part of Tennis Channel’s upcoming coverage of the Australian Open later this month, however she hopes to join the coverage occasionally via video conference.

Navratilova previously had a lumpectomy after being diagnosed with a noninvasive form of breast cancer in 2010.

The 18-time Grand Slam singles champion and member of the International Tennis Hall of Fame came out as a lesbian in 1981 and was one of the first inductees in the National Gay and Lesbian Sports Hall of Fame. However, she has become controversial in recent years thanks to her outspoken opposition to allowing transgender women to participate in women’s sports.

“You can’t just proclaim yourself a female and be able to compete against women. There must be some standards, and having a penis and competing as a woman would not fit that standard,” Navratilova tweeted in late 2018.

She later defended her comments in a column in the Times of London, where she wrote that allowing trans women to compete in sports is “cheating and unfair.”

“A man can decide to be female, take hormones if required by whatever sporting [organization] is concerned, win everything in sight and perhaps earn a small fortune, and then reverse his decision and go back to making babies if he so desires,” she wrote, not naming anyone who had ever actually done that.

“I am happy to address a transgender woman in whatever form she prefers, but I would not be happy to compete against her. It would not be fair.”