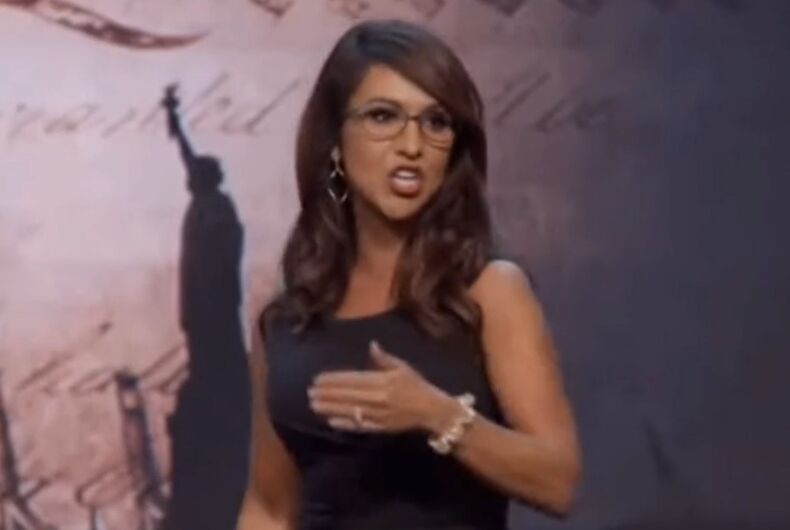 Rep. Lauren Boebert (R-CO) said that she’s praying for the vandals who attacked a San Diego hate church to “accept the love of Jesus.”

“Hurt people hurt people,” she said, retweeting images of vandalism allegedly found on the City View Church this past weekend. “Praying that those who committed this hate crime can one day accept the love of Jesus.”

Hurt people hurt people. Praying that those who committed this hate crime can one day accept the love of Jesus. https://t.co/9PHXUAqiNz

Sean Feucht, who preached at the City View Church last week, is known for his anti-LGBTQ+ and anti-mask rallies. Earlier this year, he co-organized a rally protesting Disney for opposing Florida’s Don’t Say Gay law. Vice News described the protestors as “a ragtag group of far-right extremists, conspiracy theorists, and Christian nationalists,” where people had signs that read “Pedophiles don’t get trials” and “Boycott Disney and Their Attack On Our Kids: It’s a Satanic Agenda.”

“They’ve been putting weird stuff in their movies for a long time, but now they’re actively fighting for children to be sexually indoctrinated as a kindergartner,” Feucht said during the protest.

Now the far-right Christian Broadcasting Network (CBN) reports that vandalism was found outside the City View Church on Saturday morning. Messages were spray-painted on the church’s campus that included “Queers bash back,” “Separate church and state,” “Christofascist not welcome,” “Fuck Sean Feucht!” and “No Safe Space for Bigots.” While no one has been arrested and no suspect has been named, CBN claimed that “far-left activists” were responsible for the vandalism.

“We’re not going to let persecution, bigotry, hatred, vandalism, stop us from worshiping,” Feucht said. “The church isn’t a building. We’re the bride of Christ and in 2023 we’re rising up like never before.”

Feucht used the publicity generated by the vandalism to announce that he’s planning a 50-state tour for this year called “Kingdom to the Capitol.”

“We need to go to every state in America and believe, not only that every state will become a pro-life state, but that in every state we are bringing the Kingdom to the capitol and we are going to rally pastors, leaders, and Holy Spirit-filled legislators and take responsibility for the states,” he said.

On Twitter, people pointed out that Boebert hasn’t been very interested in justice for hate crimes in the past.

I will be the first to condemn such a heinous act, but why assume that the people who did this are on the left and make this destruction of public property political?

If it was was swastikas Bobo would be silent

The so-called”love of Jesus “ also applies to the LGBTQ+ community that you’ve denigrated for years,BoBo. Fix your own hate first.

Is that why you support bills that hurt people?

You make great effort to hurt people every day. Where does your hurt/hate come from?