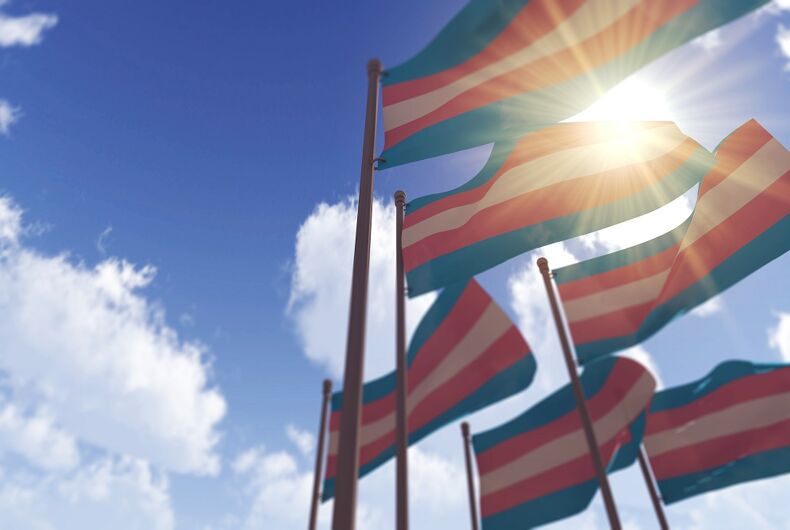 For decades now, trans folks have been patiently offering guidance on how cisgender folks can be better allies to trans and nonbinary people. In my own work as a social justice educator, I often default to an accommodating approach that aims to increase awareness and empathy. For some, this is an appropriate introduction to trans rights. Everyone has to start somewhere. But the bar it sets should be the starting point, not the end goal.

The common asks of trans allyship are necessary, but not sufficient. Using affirming language (including names and pronouns) has a powerfully protective effect on the wellbeing of trans youth, but simply putting pronouns in your email signature will not stop the onslaught of attacks against the rights of trans youth and adults. And while many self-proclaimed allies still have some of this introductory work to do, it’s time to set the bar higher.

Ready to graduate from passive ally to active accomplice? Here are some resolutions to guide you in the new year.

Wake up and pay attention

Things are bad. Probably much worse than you realize. Learn about the threats to trans rights, not only nationally or in far-away states, but in your own community. Anti-transgender rhetoric has become so mainstream and pervasive that you probably don’t have to look any further than your local school board meeting to find people actively opposing trans rights. Become familiar with the national “parental rights” organizations behind these efforts and learn how to counter their common talking points.

Remember that trans folks don’t have the freedom to ignore this rhetoric just because it is unpleasant. Our safety depends on understanding the threats we face. Our supporters can’t face these challenges with us if they don’t see and acknowledge them. Don’t wait for the trans people in your life to deliver this information to you.

When it comes to meaningful support, it’s not the thought that counts. Allyship is active state. You have to actually do something. And that action needs to match the level of threat trans folks are facing. It’s not enough to put your pronouns in your bio, or retweet an article your trans friends shares about transphobia. Yes, those are actions. And it’s more than some aspiring allies are currently doing, so please also do those things. But it’s like bringing a toothpick to a sword fight.

When a transphobic school administrator wins a statewide award for their work, raise the issue with the award-granting organization. When a lawmaker who represents you makes a transphobic comment or policy decision, reach out to their office and see if they’d be open to conversation. If they aren’t, hold them publicly accountable. After your finish wiping the tears prompted by an emotional episode of Pose, find out what you can do to support the trans people of color in your own community.

Solidarity is a muscle that can be strengthened, and if your allyship feels easy there’s probably room for growth. We can’t fight side-by-side if you aren’t willing to take on any risks. Some folks may need to start with baby steps, like sharing your pronouns when you introduce yourself. I can’t tell you how many meetings I’ve been in – with people who have participated in my trainings on trans allyship – who don’t take this simple action. Even after hearing me share my own. The more discomfort you feel engaging in a particular form of allyship, the more important it likely is.

For example, many people find public speaking uncomfortable. Especially when the context is a contentious meeting filled with angry people. But that’s when we need you most. It’s also a space where the power and privilege of regular cisgender folks can have real impact. When trans people speak up at school board and city council meetings, we do so at a real risk to our personal safety. And while some will be moved by hearing our voices, others will disregard us as “biased” because of our identities. We need you, the not-directly-impacted, to show that efforts to restrict trans rights are not acceptable.

Be willing to be the only voice in the room supporting transgender people. It’s uncomfortable, and it can change the way you are treated by those who oppose our rights. But if not you, then who?

Ask how you can help and act with urgency

Support trans folks in the ways they want and need to be supported. The best way to know what that is? Ask. Then take initiative and act with urgency. Trans folks won’t always tell you what we need unprompted. It’s exhausting, and we often have little confidence it will make any difference. So make the first move.

A common misstep among well-meaning allies is taking actions that don’t actually help – or even make things worse. A public protest is not always the most strategic response. Using someone’s affirming name or pronoun in the wrong context could pose a safety risk. This doesn’t mean you need to ask permission before you do anything, but make sure your actions are centering trans people (and not your ego) and that your allyship is rooted in meaningful self-education and community engagement.

Show up for trans folks in private AND in public

We need you to do the right thing even when trans folks are not in the room. We need you to support us in the quiet ways no one else ever sees. Some of the most meaningful acts of allyship I’ve experienced in the past year have been under-the-radar acts of kindness. While I was in the trenches dealing with transphobia from right-wing extremists, a friend in another state surprised me with a gift card to my favorite restaurant so I could treat myself to some creature comforts. It’s easy to become jaded about folks sharing their Venmo information, but the reality is that many trans folks are putting in countless hours of unpaid labor countering transphobia and other forms of oppression while struggling to pay bills. If you can’t join the fight directly, you can financially support those who do.

But we also need visible allyship. Private support is important, but as the voices of hate become increasingly loud, we need your voices to be louder. When someone makes a transphobic comment in a work meeting, say something. Out loud. In front of your cisgender colleagues. Don’t just make sad puppy eye contact with the trans person across the table. Knowing that you recognize what’s happening is cold comfort if you don’t do anything about it.

Wear your support for trans rights on your body, and not only at LGBTQ+ events. Be a visible supporter of trans justice while shopping at the grocery store, when picking your kids up from school, at your family reunion. Let your public actions be so clear that no trans person would ever wonder if they have your support.

We need allies who will fight with us side-by-side and carry the burden of activism when it gets too heavy. Trans people are literally fighting for our lives right now. How will you resolve to support trans rights in the new year? Make a commitment and share it with others. Hold one another accountable. But above all, take action.