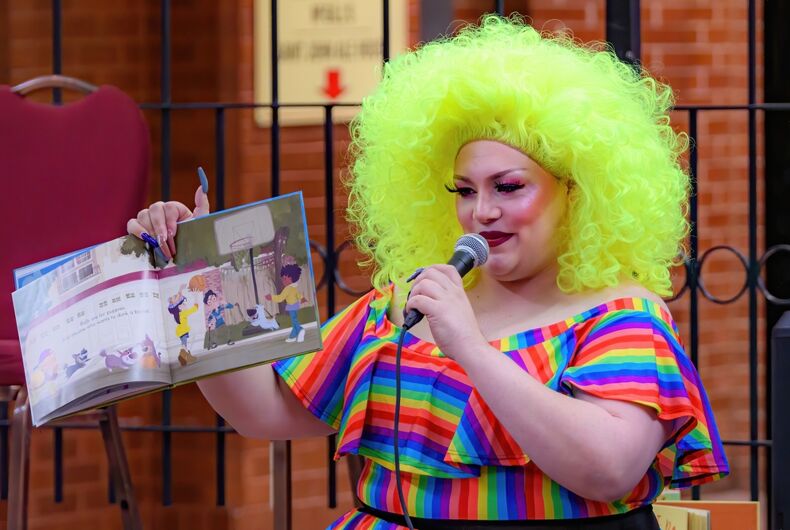 Protesters at a drag queen story hour in Baltimore, Maryland were met with a “rainbow wall” blocking attendees’ view of their hateful signs and chants.

The event hosted by the Canton branch of Baltimore’s Enoch Pratt Free Library reportedly drew 80 people who came to hear a local drag performer read on Saturday, as well as some two dozen protesters and 70 counter-protesters.

Across the street from The Church on The Square, where the event was held, protesters gathered holding signs that said “Cancel Drag Queen Story Hour,” “Drag Queens Belong In Clubs — Not Libraries,” and “You Call It Storytime — We Call It Grooming.”

Supporters of the event held up umbrellas, flags, and sheets to block the signs while playing Disney and Broadway music to drown out protesters’ chants of “leave our children alone” and “let our kids be kids.” They also escorted families to their cars following the event.

“We’ve been organizing a drag queen story hour for the past three years and never had protesters,” said Meghan McCorkell, a spokesperson for the library system. “I have no idea what caused this.”

Over the last year, events like drag queen story hours have become a prominent target for protests. According to a report published by GLAAD in December, a record 124 incidents targeting drag events were reported across 47 U.S. states in 2022. Spurred by online misinformation from social media accounts and anti-LGBTQ+ rhetoric from far-right organizations and Republican politicians, family-friendly drag events have drawn baseless accusations of “grooming” and “sexualizing” children, frequently leading to armed far-right groups like the Proud Boys attending protests.

McCorkell, however, told The Baltimore Banner that the library finds its drag book-readers through the National Drag Queen Story Hour, which vets and trains its readers.

Londyn Smith de Richelieu, director of the Mayor’s Office of LGBTQ Affairs, attended the event and showed protesters photos she took inside.

“I told them the drag queen story time wasn’t about rearing a child to become a drag queen. It was a person in character reading and doing exercises with the children,” she said. “The children loved it. Around that room there were Black parents, Asian parents, white parents, it was an inclusive atmosphere. This is not a political issue, it’s a human issue.”

“Today in Baltimore we showed them that hatred and discrimination have no place here,” said Iya Dammons, founder and executive director of Baltimore Safe Haven.

“Hate tried to organize and shut down this event,” State Delegate Luke Clippinger (D), who also attended the event, wrote in a Twitter post. “The hate failed. We won and always will.”

I spent the afternoon with my colleagues @RobbynLewis46th @ElectEdelson and a huge crowd of neighbors in support of @prattlibrary’s Drag Story Hour at the Canton Church on the Square.

Hate tried to organize and shut down this event. The hate failed. We won and always will. pic.twitter.com/iyu9M13TCi

McCorkell vowed that the library would continue to hold its drag queen story hours. “People who came to the Canton library were interested and we brought it to them,” she said. “It’s not going anywhere.”