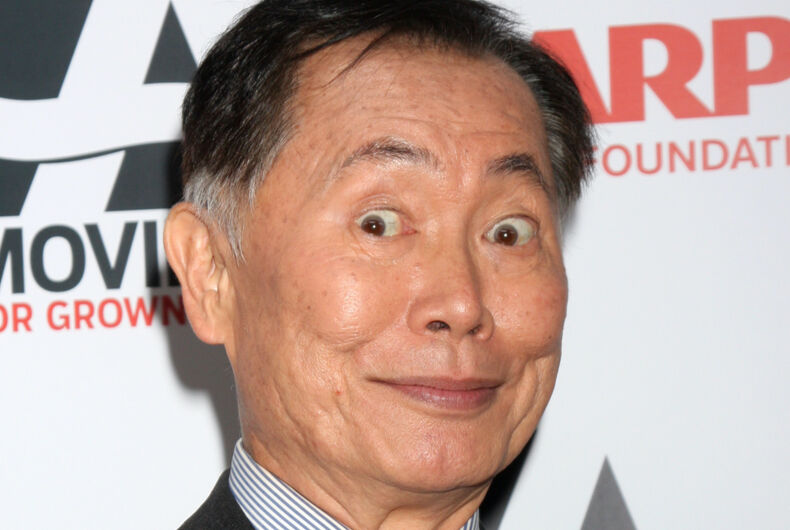 Arnold Schwarzenegger famously provoked George Takei into coming out. The 85-year-old star of the original Star Trek television series has said that the then-California governor’s veto of marriage equality led him to finally reveal to the world that he was gay in 2005.

Schwarzenegger served as California’s governor from 2003 to 2011, and during that time he twice vetoed bills that would have given gay and lesbian Californians the right to marry, first in 2005 and again in 2007.

In 2006, Takei explained that while he and partner Brad Altman had been together for 18 years and were out to their family and friends, it was Schwarzenegger’s 2005 action that inspired him to come out publicly.

“He’s from Hollywood, he’s worked with gays and lesbians, he’s comfortable with gays and lesbians, some of his best friends, you know, all these clichés, and many people voted for him on that basis,” Takei told The Progressive. “When he betrayed them and played to the narrowest, most reactionary, conservative segment of his base and vetoed that bill I felt I needed to speak out. And in order for me to do that, I felt my voice needed to be authentic. And so I spoke to the press for the first time.”

Now, in a new interview with U.K. theater and entertainment industry trade publication The Stage, Takei explains the fury he felt at the time.

“Schwarzenegger presented himself as a movie star who had worked and was friends with gays and lesbians, many of whom voted for him, but then vetoed that bill,” he reiterated. “I was so angry that I spoke to the press for the first time as a gay man at the age of 68.”

Schwarzenegger later reversed his opposition to marriage equality, calling on a federal judge to allow same-sex marriage in 2010. Following the Supreme Court’s landmark 2015 decision in Obergefell v. Hodges, the former governor said that he was happy that same-sex marriage had been legalized in the U.S.

In his interview with The Stage, Takei also explained how Hollywood pressure kept him closeted for so long.

“Why did it take me so long to come out? Because I’m an actor and I wanted to work,” he said. “I learned at a young age that you couldn’t be an openly gay actor and hope to be employed. And I was already an Asian-American actor, so I was already limited a lot.”

“To this day,” he added, “there are big Hollywood actors who are not out in order to protect their careers.”