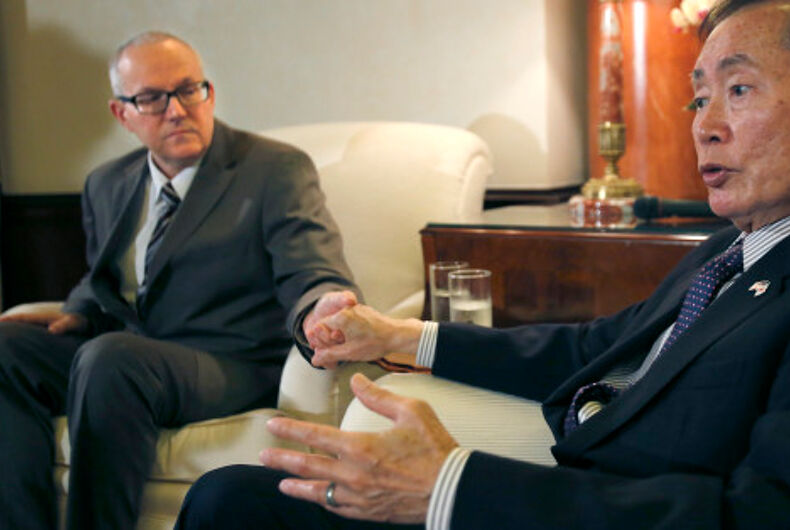 George Takei is donating 70 years worth of personal items to the Japanese American National Museum and has given the Los Angeles Times a sneak peak. An exhibit of these artifacts is set to open March 12, 2017 and will be called “New Frontiers: The Many Worlds of George Takei.” It will be the museum’s largest collection centered on any one individual.

The collection includes personal and professional memorabilia, including photographs, correspondence (including a letter from Francis Ford Coppola who apparently still owes him $500 from their college days), and items like a walking stick he used while climbing Mt. Fuji and the Olympic torch he carried ahead of the 1984 games in Los Angeles.

“Very few people have traversed as many worlds as George, both narratively in his career onscreen and literally in his life on Earth as George Takei,” exhibition curator Jeff Yang told the LA Times. “He came out of one of America’s darkest chapters during World War II and went through the transformation that occurred in Hollywood with the rise of television and the emergence of a multicultural palette of stories and performers. He was the face of marriage equality and has become a social-media influencer. There’s no one else who shares that kind of varied story.”

Takei and his family were sent to a Japanese-American internment camp during WWII and said it is his life’s work to help people understand the Japanese-American experience and to keep alive the history of the camps.

“The internment is our big historic story,” he said, noting that stereotypes of Japanese Americans in entertainment and other forms of media “fed into the hysteria and fear,” that made the imprisonment of innocent people possible. “It was the most egregious violation of the United States Constitution. And it was facilitated by the fact that there were these preconceived images and conceptions of Japanese Americans. So I’ve been advocating for an exhibit that examines that history.”

He pointed to the similarity between then and now, with Muslims as the new scapegoats, facing negative stereotyping from President-elect Donald Trump.

“Muslims are 1 billion people in this world, yet to infer they’re all potential terrorists is outrageous,” he said. “To characterize a whole faith group as one kind is what happened to us during the Second World War. It’s dangerous and un-American.”

He recently took to Twitter to give advice and strength to those in fear of what a Trump presidency will mean for America, and especially for her minority populations.

Takei showed the reporter a piece of abstract wood sculpture his father made while in the camps, saying it showed his creativity and resistance amid adversity.

The collection also includes Mr. Sulu’s maroon and black uniform from the film “Star Trek VI: The Undiscovered Country,” where the character was finally promoted to captain.

And there is a photo album from his wedding to husband Brad Altman.

Takei came out publicly in 2005, at the age of 68, after Arnold Schwarzenegger’s veto of same-sex marriage legislation.

“He thought Hollywood would be finished with him because he’d be too controversial to cast,” Altman said. “And George, what happened?”

“It was a tenor of the times,” Altman said. “Turns out America likes an authentic voice.”