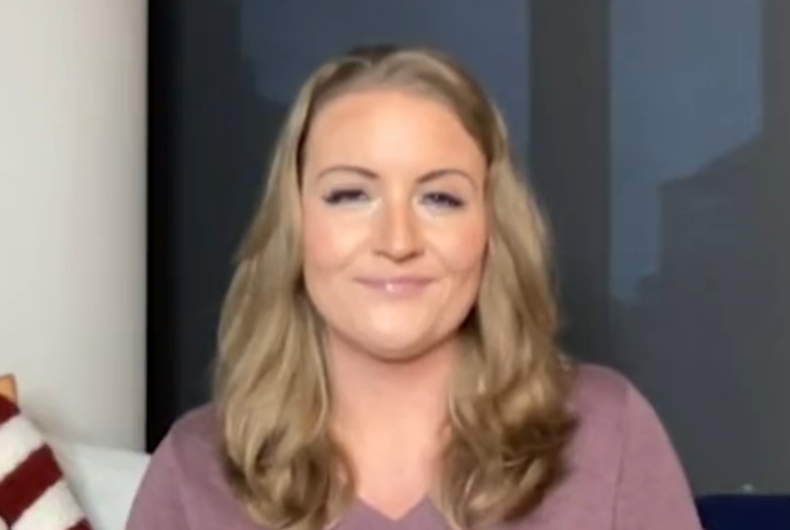 Former Trump legal advisor Jenna Ellis says that the Respect for Marriage Act (RMA) could lead to the Supreme Court overturning Obergefell v. Hodges, the 2015 decision that legalized marriage equality in all 50 states, as she accused liberals of legalizing same-sex marriage so that they could legalize child marriage one day.

Her argument was that the RMA violated “exactly what the Constitution requires the government to protect in the First Amendment, which is free exercise of religion and freedom of speech.”

“Interestingly, Joe Biden signed this bill that doesn’t have specific protections for religious freedom into law against concerns by religious organizations that said that this will give rise to more legal challenges like what we just saw in the Supreme Court last week with 303 Creative v. Elenis case,” she said, describing it as a case that was brought by a webdesigner who didn’t want to make a website for “a gay couple.”

She got a couple facts wrong in that sentence. First, the RMA was amended in the Senate to specifically say that the bill does not require religious organizations to provide “any services, facilities, or goods for the solemnization or celebration of a marriage.” Whether or not Ellis likes the religious protections in the RMA, they do exist.

Second, the case she cited – 303 Creative v. Elenis – is a lawsuit brought by a Christian web designer who doesn’t want to make websites for the weddings of same-sex couples, which she said that she might be required to do under Colorado’s anti-discrimination law. The suit is challenging an anti-discrimination law, not marriage laws.

Last, the case doesn’t involve “a gay couple” at all. No same-sex couple has asked the Christian web designer to make them a wedding website; she sued Colorado preemptively.

Ellis discussed oral arguments in the 303 Creative case last week and said that same-sex marriage will lead to pedophilia.

“I bet you, further down the road, Justice [Elena] Kagan is going to ask an advocate one day, ‘What’s the problem between an adult and a minor wanting to get married?” Ellis said, as if marriage between an adult an a minor isn’t already legal in over half of states. Despite her implication about Kagan, it’s usually conservatives who defend child marriage in state legislatures.

OAN host Dan Ball asked Ellis if states could sue Biden for signing the law, and she said, “Absolutely.”

Ellis was a state-level prosecutor for misdemeanor and traffic cases and had no experience in the federal legal system before being hired by Donald Trump.

“I hope this leads to an overturning of Obergefell that the Democrats did not anticipate and actually provides the legal basis to challenge this and to get this in front of the Supreme Court with the conservative majority as soon as possible,” she said.

Former Trump lawyer Jenna Ellis hopes the Respect for Marriage Act gets challenged and ultimately leads to the Obergefell ruling being overturned by the conservative leaning Supreme Court. pic.twitter.com/d5o5dNLeej

Ellis is far from the first person on the right to make this claim, that same-sex couples getting married inherently violates religious freedom protections because legalizing same-sex marriage is the same as banning people from opposing it.

Supreme Court Justices Clarence Thomas and Samuel Alito made the same argument in a dissent to a decision to refuse to hear a case in 2020. The judges said that Obergefell led to people “with sincerely held religious beliefs concerning marriage… find[ing] it increasingly difficult to participate in society.”

To Thomas and Alito, the problem wasn’t that some conservative Christians were being told that their views are out of step with the majority and they should just accept that others have a right to criticize Christians. The problem, they argued, was that criticism of Christians violates the Constitution’s religious liberty protections and the only remedy is to end marriage equality.

“By choosing to privilege a novel constitutional right over the religious liberty interests explicitly protected in the First Amendment, and by doing so undemocratically, the Court has created a problem that only it can fix,” wrote Thomas. “Until then, Obergefell will continue to have ‘ruinous consequences for religious liberty.’”

Earlier this week, Mat Staver of the hate group Liberty Counsel said that the RMA “will be the undoing of the Supreme Court’s 2015 same-sex marriage opinion in Obergefell v. Hodges.”

“The advocates of RFMA may celebrate today, but that celebration will not last,” he said. “Lawmakers have unwittingly created the perfect scenario to overturn the unconstitutional Obergefell decision.”

His argument was that the only reason the Supreme Court hasn’t already overturned Obergefell is because they don’t want to invalidate same-sex couples’ marriages, but the RMA will now protect those marriages, so the Court can overturn Obergefell.

“As a result of RFMA, when Obergefell is overturned, those who obtained licenses will be ‘grandfathered’ in and the licenses will remain valid,” Liberty Counsel said in a statement. “However, like abortion, the Supreme Court will overturn Obergefell and states will then be free to return to their laws prior to 2015 where they defined marriage as the union of one man and one woman.”