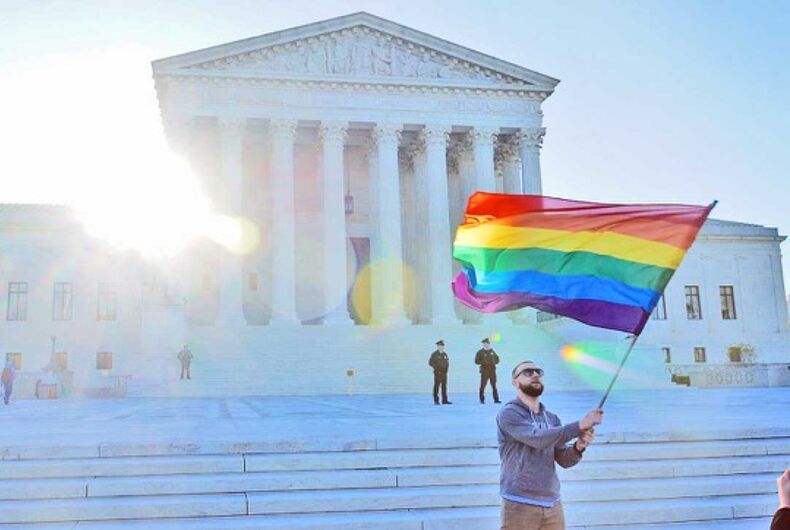 The Supreme Court has agreed to hear 303 Creative LLC v. Elenis, a case that could determine the future of LGBTQ rights nationwide.

The case involves Lorie Smith, a Christian woman in Colorado who makes wedding announcement websites. Smith wanted to post a message on her professional website stating that she wouldn’t make websites for same-sex marriages because it would be against her faith.

When she found out that such a notice would violate Colorado’s anti-discrimination laws, she preemptively sued her state’s government, saying that the laws violated her First Amendment right to free speech. Her lawsuit sought to block enforcement of the law.

She appealed to the 10th Circuit Court of Appeals, and it also ruled against her in a 2-1 ruling, stating that such laws are “essential” to maintaining “democratic ideals.”

Smith’s case sounds very similar to the 2018 Supreme Court case of Masterpiece Cakeshop v. Colorado Civil Rights Commission, which involved a cake shop owner who refused to make a cake for a same-sex marriage because it violated his rights to free speech and religious freedom. Both Smith and the cake shop owner sued over the same law and both are legally represented by Alliance Defending Freedom, a Christian and anti-LGBTQ legal group. But Smith’s case differs in two key ways.

First, no same-sex couples actually asked Smith to design their website. So, the Supreme Court could agree with the district court’s decision that she lacks legal standing to challenge the law.

Rather, the central question in Smith’s case — according to her supporters — is whether states can use public accommodation and non-discrimination laws to compel business owners to create speech that they personally disagree with, such as a website that promotes a same-sex marriage when its creator would never promote such an event otherwise.

However, LGBTQ advocates say that the effects of this case will go far beyond free-speech, and could hollow out LGBTQ protections by essentially allowing any employee to deny service to LGBTQ people or those whose identities they disagree with.

Some amicus briefs filed to the court said that its nine justices should decide whether the First Amendment applies to goods and services that are uniquely expressive forms of speech, like creative works.

However, it might be difficult for the court to decide which works are “uniquely expressive” arts. After all, some might argue that medicine, teaching, or serving are all “arts,” potentially leaving the door open for medical providers, educators, and customer service workers to all discriminate against LGBTQ people.

Jennifer Pizer, acting chief legal officer of Lambda Legal, told The Los Angeles Blade, “This contrived idea that making custom goods, or offering a custom service, somehow tacitly conveys an endorsement of the person — if that were to be accepted, that would be a profound change in the law.”

“And the stakes are very high because there are no practical, obvious, principled ways to limit that kind of an exception, and if the law isn’t clear in this regard, then the people who are at risk of experiencing discrimination have no security, no effective protection by having non-discrimination laws, because at any moment, as one makes their way through the commercial marketplace, you don’t know whether a particular business person is going to refuse to serve you,” she added.

“It’s not too much to say an immeasurably huge amount is at stake,” Pizer said.

In its Masterpiece Cakeshop decision, the court ruled narrowly in favor of the cakeshop, saying that it hadn’t gotten a fair and impartial hearing in lower decisions and dodging the larger question about whether it should be legal to discriminate based on speech or religious grounds.

Considering the Supreme Court’s current 6-to-3 conservative majority, and its willingness last year to overturn the 40-year old right to an abortion, the court could declare a right to discriminate, effectively setting the fight for LGBTQ rights back several decades and ushering in a new generation of people willing to deny services to anyone they find morally objectionable.

Trans teen bullied by volleyball teammates then by rightwing media