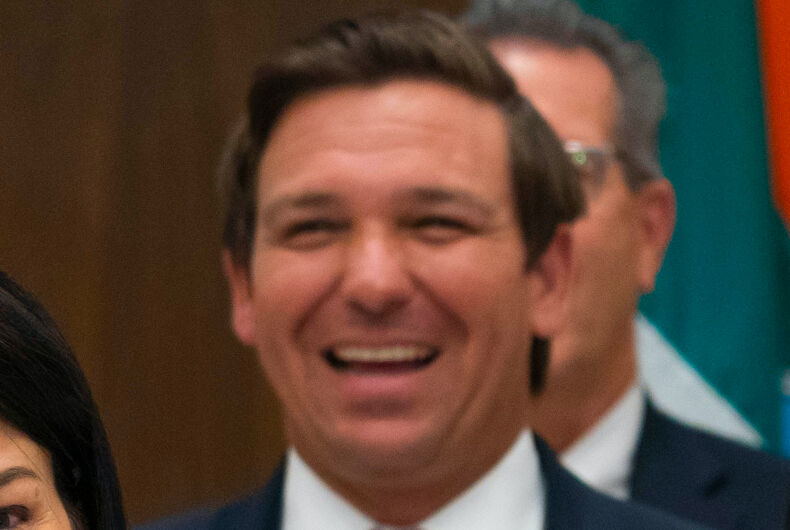 Florida Gov. Ron DeSantis (R) helped members of the anti-LGBTQ group Moms for Liberty get elected to local school boards in his state. Now the newly seated board members are repaying DeSantis by ousting school officials who dared defy his orders against school mask mandates during the height of the COVID-19 pandemic.

An educational anti-censorship expert says this development is part of DeSantis’ plan to shift his state’s schools toward a conservative ideology. With Moms for Liberty in control, curricula will exclude LGBTQ-inclusive and anti-racist education.

Bridget Ziegler, a co-founder of Moms for Liberty, is now chair of the Sarasota County school board. She is one of two dozen school board candidates to whom DeSantis donated $1,000. Most won their elections, Common Dreams reported.

On Tuesday, Ziegler and the Sarasota County school board voted 4-1 in favor of ousting Brennan Asplen, the superintendent of county schools. Moms for Liberty criticized Asplen and school board members in 2021 when the board voted to require students to wear face masks in schools. The vote defied DeSantis’ executive order requiring schools to allow parents to opt out of mask requirements.

Earlier this month, five members of the Broward County school board – also supported by DeSantis – voted to fire district superintendent Vickie Cartwright. Cartwright and her district had also defied DeSantis’ face mask order. The superintendent of the Brevard County school district was also fired last week, mere hours after DeSantis-aligned school board members were sworn in, the aforementioned publication noted.

In summer 2021, DeSantis’ Board of Education threatened to withhold state funding from school districts that defied his mask order. DeSantis didn’t follow through on that threat, possibly choosing this long-game method instead.

While these firings may seem like score-settling between DeSantis and a few superintendents, political observers are alarmed because of their similarity to the recent ousting of Deon Jackson, the first Black superintendent of the Berkeley County school district in South Carolina.

Jackson was ousted by six board members endorsed by Moms for Liberty. During the same meeting, the board members voted to fire the school district’s lawyer, ban anti-racist curriculum from classrooms, and establish a book-banning committee.

One can imagine the sorts of policies that the Moms for Liberty board members will pursue by looking at the organization’s past actions.

The group’s past activities include offering bounties for turning in teachers who discuss “divisive topics,” attacking the Trevor Project for trying to prevent LGBTQ teen suicide, trying to get a book about seahorses banned for being too sexy, complaining about a book about the Civil War because it portrays “white people as ‘bad’ or ‘evil,’” trying to get librarians arrested for offering “inappropriate books,” saying that two girls briefly kissing at a school function is “lewd” and “traumatic,” lobbying in Florida for the Don’t Say Gay bill, encouraging schools to ignore LGBTQ History Month, and suggesting that LGBTQ students be forcibly isolated from other pupils.

Last month, DeSantis’s Board of Education installed Michelle Beavers, head of a local Moms for Liberty chapter, as part of a workgroup that will train public school librarians on how to follow censorship rules signed into law by DeSantis earlier this year.

“The new playbook of total ideological control is in full swing,” said Jonathan Friedman, director of free expression and education programs at PEN America, who criticized the superintendents’ firing on social media.

Andrew Spar, president of the Florida Education Association, the state’s largest teachers union, said he hopes the board members will support school staff and pick new superintendent candidates whose values reflect their respective communities and not just DeSantis’, Politico reported.

“Firing is the easy part,” Spar said. “The hard part is finding the right person.”