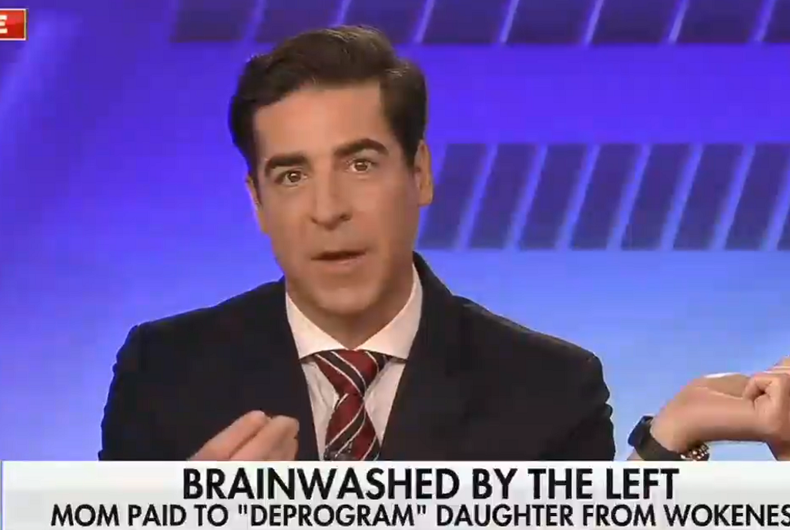 A Fox News host told female viewers “to stop chopping your hair off” in a bizarre rant about women’s colleges.

Jesse Watters was discussing Mount Holyoke College, a women’s college in Massachusetts. Rightwing media spent a large part of the past week discussing Annabella Rockwell, a pharmaceutical fortune heiress, a rightwing activist, and a Mount Holyoke alumna who claims that her mother hired a $300/day “deprogrammer” to turn her conservative after college.

“I left school very anxious, very nervous, very depressed and sad,” Rockwell told the New York Post. “I saw everything through the lens of oppression and bias and victimhood. I came to the school as someone who saw everyone equally. I left looking for injustice wherever I could and automatically assuming that all White men were sexist. My thoughts were no longer my own.”

She told Fox News host Tucker Carlson that she didn’t participate in the “MoHo chop,” which she described as an initiation ritual where new students cut off their hair to throw off the patriarchy.

Rockwell claimed she was conservative until her junior year when she took a gender studies class and learned what the word “patriarchy” meant.

“I barely knew what the word meant,” she claimed. “I didn’t know what she was talking about. I wasn’t someone that into feminism. I just knew that I felt I had always been free to do what I wanted. I never experienced sexism. But I was told there’s the patriarchy, and you don’t even understand it’s been working against you your whole life. You’ve been oppressed, and you didn’t even know it. Now you have to fight it. And I just went down this deep rabbit hole.”

She said this led to conflict with her mother, so her mother did what any person would do and hired former tennis coach Scott Williams to make her daughter conservative again.

“It was like walking a tightrope,” mother Melinda Rockwell said. “I couldn’t push too hard or I’d lose her, but if I let go, I felt I might not see her again.”

“It was as bad as trying to get a child off the streets who’s on heroin,” she said about her then-liberal daughter.

“If my mom had not kept harping at me and not given up, I know where I would be right now,” Rockwell said. “Mount Holyoke met its match in my mother. If it wasn’t for her, I’d probably be living in Massachusetts, working for some super-progressive politician, hanging out with people I had nothing in common with except ideology and drinking all the time. And I’d be miserable.”

“If you want to save the $300 a day to deprogram someone from being woke, watch Fox,” he said.

“And I want to speak directly to the heir right now,” he said, pointing at the camera. “Dana [Perino, a co-host], hold my hand.”

“Women need men. And men need women. We need each other. And if you understand nature, you understand there is not a war between the sexes. We need to make love, not war. And you need to stop chopping your hair off and calling us ‘toxic.’ We are on a mission – yes, we peacock, but we peacock for your attention – so fall in love and let’s all live happily ever after.”

In the same segment, Watters also said that he’s worried that his doctor will “make a mistake” and he will “undergo some radical gender reassignment surgery because someone has it in for me,” perhaps betraying one of his deeper fears.

Rockwell is a fundraiser for the far-right group PragerU and used to work at the investment bank J.P. Morgan.