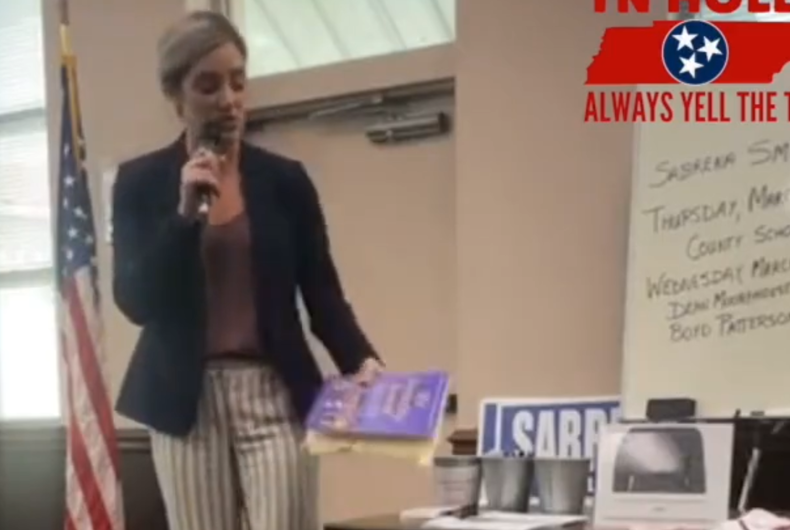 Coty Wamp won the election to be the district attorney of Hamilton County, Tennessee last night as a video of her advocating prosecuting librarians for choosing to put books on library shelves that she feels are inappropriate, at a time when elected officials across the country are calling for bans on books that deal with LGBTQ themes and issues in racism. Now she’s denying that she ever called for prosecutions.

“It’s called contributing to the delinquency of a minor,” she said at a campaign event in May.

Wamp was asked by a voter if “there should be some kind of prosecution for these librarians” at the campaign event because librarians “are like, ‘we are the experts,’ and ‘we get to choose what goes in here.’”

She responded by proudly saying that she brought the anti-LGBTQ organization Moms for Liberty to the sheriff’s office to meet with the sheriff (she is currently counsel for the Hamilton County Sheriff’s Office).

“We all need to rally around it and talk about what the next best steps are,” she said.

“I think there is going to come a time when some of these books where is crosses a criminal line,” Wamp said. “What is the difference between having inappropriate information on a brochure that you’re passing out to kids as they come into school – which obviously you can’t do – than just having it in their libraries?”

“The makeup of the books in our schools is gonna change drastically if we’ve got the right people on the school board,” she continued, holding up a book. “I mean, that’s the first step, because I can’t act like I can prosecute everybody if I can’t identify a criminal offense.”

“Obviously, if a teacher is handing a child something that I think is sexually explicit, I think we’ve got to look at the criminal statute and determine if the elements are there.”

📚WATCH: “Do you feel like there should be some kind of prosecution for these librarians?”

In May, Coty Wamp made it clear prosecuting librarians is on the table, and said she brought Moms for Liberty to meet the sheriff.

Now she’s saying that she never advocated prosecuting librarians, even though her speech in the video showed that she had put a lot of thought into it.

“I won’t prosecute librarians or teachers for the books that are in our schools, and I do not say that I will in this video,” she told Jezebel. “The book that I was looking at in this video, which was in at least one of our county elementary schools, described sex positions using photos that could potentially amount to child pornography. I would assume most agree that elementary age children do not need to learn about sexual positions while they are at school. That’s absurd.”

Considering far-right groups are calling for bans on innocuous books like Everywhere Babies and And Tango Makes Three because they show pictures of same-sex couples, it’s hard to take Wamp at her word that the book in question is something that most people – and not a minority of conservatives – would find inappropriate.

Over the past year, rightwing elected officials have parroted false and absurd rumors that involve sexualized content in schools. Nebraska Sen. Bruce Bostelman (R) said in March that children “dress up as animals, cats or dogs, during the school day. They meow and they bark,” and schools are accommodating this behavior because a school “didn’t provide the litter box so the student went ahead and defecated on the floor.”

He later acknowledged that he was spreading false information.

Montreal Pride parade was suddenly canceled. That didn’t stop hundreds from marching in the streets

Transgender Twitch streamer Keffals targeted with swatting: “I thought I was going to die”