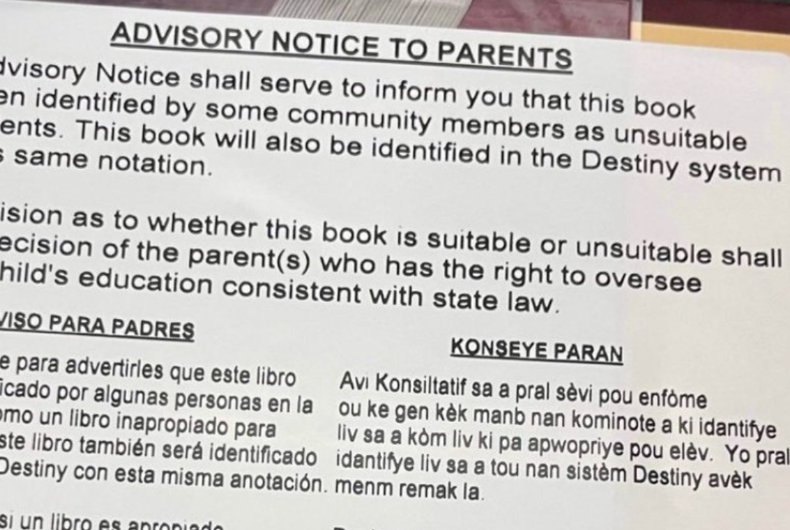 A school district in Florida has added parental warning labels to over 100 books touching on everything from race to LGBTQ issues, including a children’s book called Everywhere Babies.

“This Advisory Notice shall serve to inform you that this book has been identified by some community members as unsuitable for students,” the label, placed on the inside front cover of books in the Collier County Public School libraries, reads. “This book will also be identified in the Destiny system with the same notation. The decision as to whether this book is suitable or unsuitable shall be the decision of the parent(s) who has the right to oversee his/her child’s education consistent with state law.”

“These warning labels are like something you might see on a cigarette package,” said Jonathan Friedman, director of free expression and education programs at PEN America. “They’re treating it like a controlled, alarming substance. This is literature for young people.”

The labels appear digitally in the library records & physically on the books. They warn: “this book has been identified by some community members as unsuitable for students.” Apparently, a lot is ‘unsuitable’. Even Everywhere Babies by Susan Meyers & illustrated by @MarlaFrazee. pic.twitter.com/wA5fT5fjLr

According to NBC News, the list of 110 books featuring the label overlaps significantly with a list of books that conservative group Florida Citizens Alliance inquired about in a December email to Collier County Public Schools.

Labeled books include many that will be familiar to anyone tracking banned books in U.S. schools: Maia Kobabe’s Gender Queer: A Memoir, George M. Johnson’s All Boys Aren’t Blue, Toni Morrison’s Beloved.

Everywhere Babies, a children’s book by Susan Meyers, also got a warning label. The book, which the Washington Post calls a “whimsical, lyrical ode to infancy” – has drawings of numerous families. One page includes a drawing of a man with his arm around another man’s shoulders. That was enough to get the book targeted by far-right organizations.

I homeschooled my children AND they read every Children’s book on the banned lists.

I just bought 5 copies of “Everywhere Babies” due to school groups list to ban it.

Stephana Ferrell, co-founder of the Florida Freedom to Read Project, a nonprofit that advocates against censorship, says that Collier County Public Schools associate superintendent of teaching and learning Elizabeth Alves told her that the district began adding the labels in February, after the district’s legal representative spoke with the Florida Citizens Alliance. She called the decision “a compromise.”

Collier County Public Schools spokesperson Chad Oliver disputes this however, claiming that the warning labels were not added in response to a conversation with the Florida Citizens Alliance.

“Based upon advice from the General Counsel, we placed advisory notices on books about which parents and community members had expressed concern and in accordance with the recently passed Parents’ Bill of Rights Law (HB 241),” he said. Florida’s HB 241 allows parents to object to school instructional materials.

Oliver  insisted that none of the books had been removed from library shelves and that the labels do not specifically target LGBTQ materials. “At no time were the members of the LGBTQ community a focus of the district’s review,” he said. “Whether we are following new State laws or responding to concerns from community members, Collier County Public Schools is mindful of both U.S. Supreme Court precedent based upon the First Amendment principals, Fourteenth Amendment equal protection principles, and Florida Civil Rights Law.”