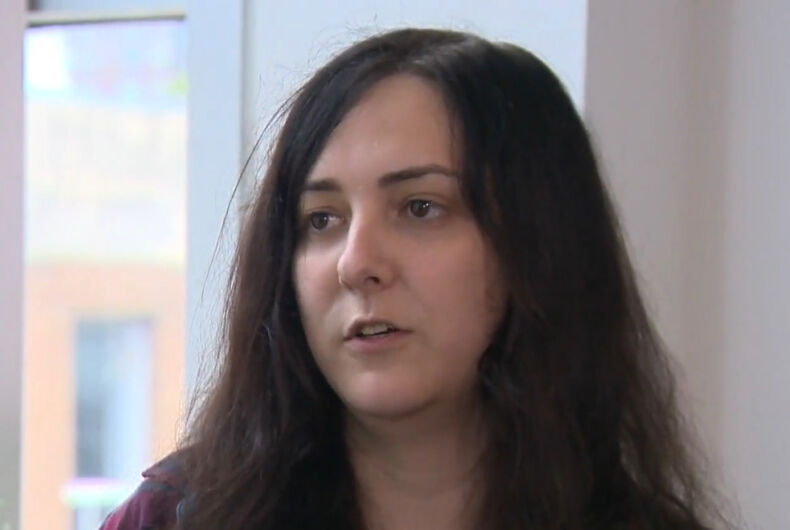 A transgender activist and popular Twitch streamer was arrested after police raided her London, Ontario home in what she says was a “swatting” incident.

Swatting is the act of making a false police report in order to get police to go to a person’s home. In 2017, a swatting led to the death of a Kansas man, Andrew Finch.

Clara Sorrenti, who goes by the name Keffals on social media, says that on August 5 police searched her apartment for eight hours and arrested her after someone using her deadname sent violent threats to local city hall officials. An email from her address claimed that Sorrenti had killed her mother and was planning to shoot people at city hall.

“I thought I was going to die,” Sorrenti told Global News Toronto.

Here's the TV piece about what @keffals endured during her swatting and doxxing in London, Ontario. She first talks about how her community has often been a haven for transgender youth and the LGBTQ+ community at large. pic.twitter.com/wmTrzmCC90

An officer told CBC News that police obtained a search warrant for Sorrenti’s residence. After 11 hours in custody, she was released without charges, but police kept her electronic devices for analysis. She was able to retrieve them on Wednesday.

Sorrenti, a Communist Party candidate in Canada’s 2019 federal election, says that police persisted in using her deadname, which is not her legal name, including it on official documents and evidence bags. She says that if police had been more sensitive to trans issues, the fact that the alleged threats used her deadname would have been evidence that the threats were bogus.

“No one in my life refers to me by that name. It’s been a decade since anyone has done that,” she told CBC News. “The only reason people might use it is to mock me, to try to take away my power and dignity.”

“I had a hate crime perpetrated against me, and instead of the police helping me, they victimized me for it,” she told Global News Tornonto.

On Wednesday, London police chief Steve Williams said that he will review how offices treated Sorrenti.

“We acknowledge the distress that this has caused Ms. Sorrenti and we will be reviewing the occurrence to understand how that might have happened,” Williams said in a statement. “The London Police Service is committed to bias-free policing and treating all individuals with respect and dignity.”

Sorrenti has used her Twitch platform to speak out about transgender issues to her more than 44,000 followers. That has led to persistent harassment on social media. “They want me dead because I’m a high-profile transgender activists,” Sorrenti said. “There’s a big target on my back and for the past year, transgender people have been the focal point of a culture war.”

In July, Twitch banned Sorrenti from the platform after a stream she was doing highlighting examples of the hateful abuse she receives was mass reported by trolls.

“Twitch banned one of their biggest transgender streamers from their website for openly talking about the abuse they receive,” she tweeted at the time. “I do not understand how they managed to f**k up so badly.”

She was later allowed back on Twitch.

Sorrenti remains defiant even after the swatting incident. “I’m not backing down. I know that the work I do is incredibly valuable. And thousands of trans people have told me that,” she said. “If they want me to stop, the next time they better manipulate the police into pulling the trigger.”

Insufferable woman gets banned for life from pool that welcomes everyone