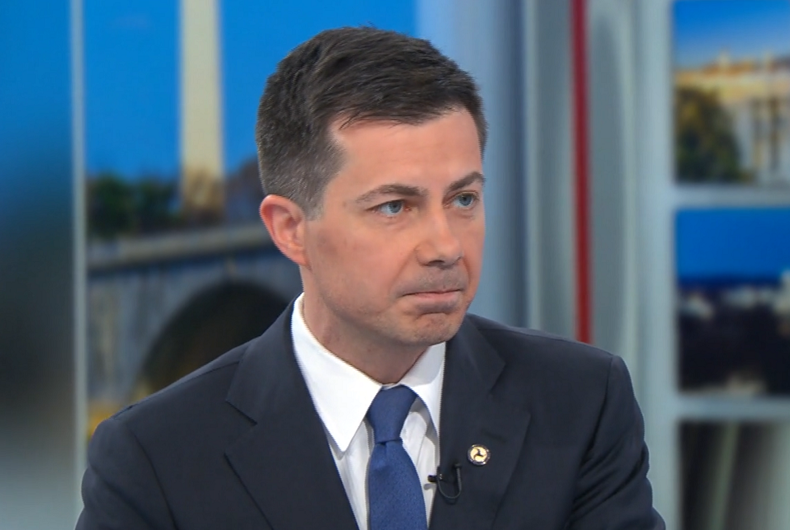 Transportation Secretary Pete Buttigieg appeared on today’s episode of CNN This Morning to share his thoughts on a Missouri congresswoman’s tearful plea for her fellow Republicans to vote against the Respect for Marriage Act.

Rep. Vicky Hartzler’s (R) speech on the House floor went viral last week. “I hope and pray that my colleagues will find the courage to join me in opposing this misguided and this dangerous bill,” Hartzler said as she choked back tears.

Today, CNN This Morning host Don Lemon asked the out Secretary for his reaction.

“I just wonder if she could see the family life that Chasten wrote about so movingly in that piece on Medium. And that, again, is the most important experience in my day,” Buttigieg said. “If you believe in family, if you believe in kindness, if you believe in love, then you want to see what goes on in millions of families, including mine, where the love and the institutional support of marriage that binds me and Chasten together, including through hard times and, you know, a tug of war over who’s going to do the dishes when we’re both exhausted, and you know what to do when we run out of, you know, run out of eggs or those puffs that you can put into a little cup that have a remarkable kind of bribery effect on getting the kids to settle down and quiet down when they’re in the stroller, the minivan.”

Lemon, himself an out gay man, interrupted Buttigieg to gently rib the Cabinet member’s very suburban choice of vehicle.

“Wait, wait. You have a minivan?” Lemon asked, laughing.

“Oh, yeah! Yeah. And that’s another example of how marriage changes you and how kids change you,” Buttigieg replied. “I never thought I would be a minivan person.”

“The things we do for the love of our children, right?” Buttigieg continued. “That’s how our families change us. So, the people we care about most, we would do anything for our kids.”

In a subsequent appearance on CNN, Andrew Hartzler, who works with the Religious Exemptions Accountability Project, revealed the extent to which the anti-LGBTQ+ policies his aunt supports have affected him personally.

“I was subjected to conversion therapy practices,” he said. “That was totally legal because of the policies that my aunt has helped put into place.”

Andrew Hartzler: I was subjected to conversion therapy practices. That was totally legal because of the policies that my aunt has helped put into place pic.twitter.com/YduZryJozN

Despite Rep. Hartzler’s emotional plea, the Respect for Marriage Act passed with bipartisan support in both the House and Senate.