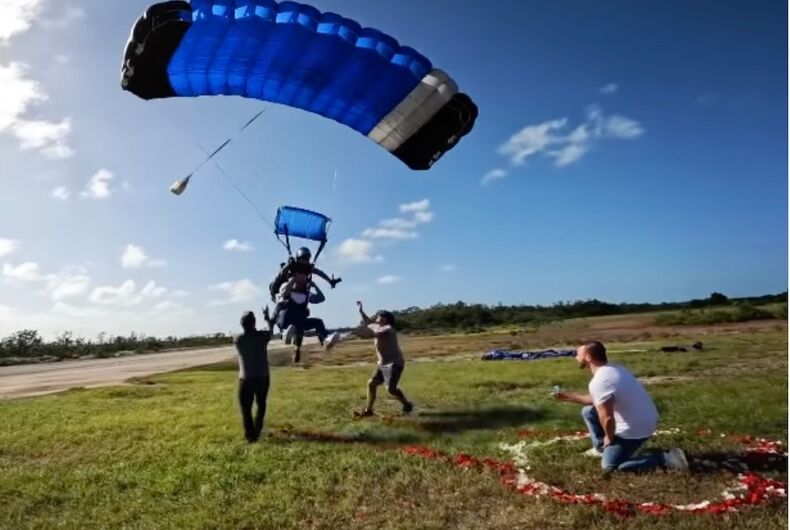 Miami-based couple Garo Kiledjian and Todd Jordan Tyler recently got engaged during an epic skydiving adventure – and they shared the whole story on Instagram.

The couple – who has been together since 2019 – went skydiving together in Key West. Kiledjian landed first, and by the time Tyler reached the ground, Kiledjian was down on one knee. Not only that, but he was kneeling in the center of a flower shaped by rose petals, and beside him was a massive “Will You Marry Me” banner.

“Last weekend our lives changed!” Kiledjian wrote on Instagram. “I finally proposed to the love of my life, @todd.j.tyler… we went skydiving and I proposed once we landed.”

“I was so nervous that instead of giving him the ring, I handed him the box. I was a mess, because not only was I going to shit my pants from the small toy plane we were in—but the entire plan almost got canceled due to bad weather. Sooo many things I had to work out logistically (rose petals, sign, photographer) to make sure nothing went wrong!”

Kiledjian also joked about the fact that Tyler had also had a proposal planned and was slightly disappointed that Kiledjian had beaten him to it.

“If you hear Todd laughing or saying ‘psycho; in the background, it’s because he had a proposal set up too for our New Years trip to Paris.”

“Photographer, videographer, location; everything already scheduled. Poor guy didn’t know if he should be happy or disappointed that his plans were ruined…I beat him to the punch! We’re still keeping his plans for Paris. There will be two proposals. Basking in this moment because it’s short lived. Can’t wait to get married to my one and only!! I love you Todd.”

Tyler also posted about the engagement, saying he “couldn’t be happier.”

Only a few days earlier, Tyler had also posted to celebrate the couple’s three-year anniversary, writing, “That’s 1,095 days we’ve been creating a life, showing up with love, and growing in the same direction. It’s beautiful to make that choice each day with you. We have just begun.”

In an interview with our sibling site Queerty, the couple again talked about how wonderful it has been to love each other for the past three years.

“A loving and growing relationship is an enormous body of work, even in our three years as a couple, we both feel proud of choosing each other fully each day.”

They also expressed excitement about the passage of the Respect for Marriage Act.

“Both of us are happy that some sanity has come back to protecting equality, not only for us as two men who want to marry but also for interracial couples. It will be a huge relief once the federal protection for same-sex marriage is signed into law.”

“It has been a huge whirlwind of emotions throughout both of our lives, watching from the sidelines as this issue is dangled before us, as individuals and members of the community. We both grew up not believing that we would be able to see this day. Yet here we are at an instrumental time, ready to create a life together which includes the institution of marriage.”