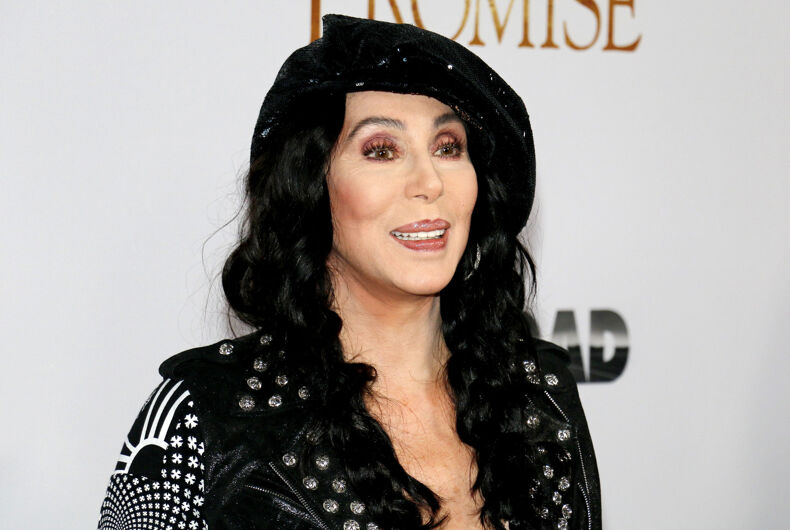 Beloved pop diva Cher sparked rumors on Christmas morning after she posted an image of a diamond ring on Twitter. Many commenters assumed that the 76-year-old singer may now be engaged to her 36-year-old boyfriend, music executive Alexander “A.E.” Edwards — but Cher hasn’t confirmed the rumors.

Cher’s post had an image of a sparkling ring in a black box. She wrote, “There r no words, Alexander, A.E.” Numerous fans congratulated her, asked whether he had proposed, and suggested that she get a pre-nuptial agreement to protect her riches in case of a divorce.

About an hour after her original tweet, she re-posted the image and wrote, “I posted this cause his nails are so cool.” The bottom of the image showed a thumb wearing black nail polish with green flames.

Approximately nine hours after that post, she wrote another which read, “Want to send my love out to u. We have been through tears of sadness & joy. Merry xmas.”

Unnamed sources recently told Radar Online that Cher wants to marry, but her friends worry she has “fallen too fast” for her younger boyfriend.

“Cher is head over heels in love,” one source said. “She knows she doesn’t have much time left anymore to find ‘the one’ and after two failed marriages and countless disastrous boyfriends, this could be her LAST chance and she isn’t going to let it pass her by.”

The source added, “Of course, her friends are worried. Whenever there is a 40-year-old and $400 million gap between two people, you have concerns!”

Paparazzi photographed Cher and Edwards in early November holding hands as they entered the West Hollywood restaurant Craig’s. The photographers also noticed Edwards “delicately kissing Cher’s hand while they were in a car,” the gossip site Page Six noted.

At the time, numerous web commenters noted that the two are 40 years apart in age. However, Cher told critics to leave them alone because “we’re Happy & Not Bothering Anyone.” She eventually confirmed their relationship in a Vogue magazine interview.

Of course, Twitter commenters were quick to warn Cher. One stated, “I’m not sure how I feel about this. I’ve been a fan for so long that I’m immediately suspicious of his intentions towards you. WE know you are fabulous and I’m sure your inner circle will continue to have your back. Want you to be happy, but not taken advantage of!!!”

Cher responded, “As we All Know …I WASNT BORN YESTERDAY,& What I Know For Sure…There Are No Guarantees. Anytime you make a Choice You Take a Chance.I’ve Always Taken Chances…It’s WHO I Am.”

The same commenter replied, “It would be naive not to question a 34-year-old’s motives and intentions. Our girl is smart but they don’t say love is blind for no reason at all.”

Apparently tired of the chatter, Cher wrote, “Haven’t You Got Anything Else 2 Do⁉️ Let Me Explain…I DONT GIVE A✈️FK WHAT ANYONE THINKS.” She later added, “I’m Not Defending us.Haters are Gonna Hate…Doesn’ Matter That we’re Happy & Not Bothering Anyone.”

A post shared by SOLUTION OF PEOPLE NEWS (@sopmagazine1)

In 2021, Edwards’ former romantic partner, sexually fluid actress Amber Rose, said that he had cheated on her with at least 12 different women. Edwards and Rose started dating in 2018 and have a son named Slash.

Edwards publicly admitted to wrongdoing, writing, “I want to sincerely apologize to my beautiful wife @amberrose you didn’t deserve what I did to you. You’re an Amazing person and a wonderful mother to our boys. I’m sorry for the pain that I’ve caused you.”