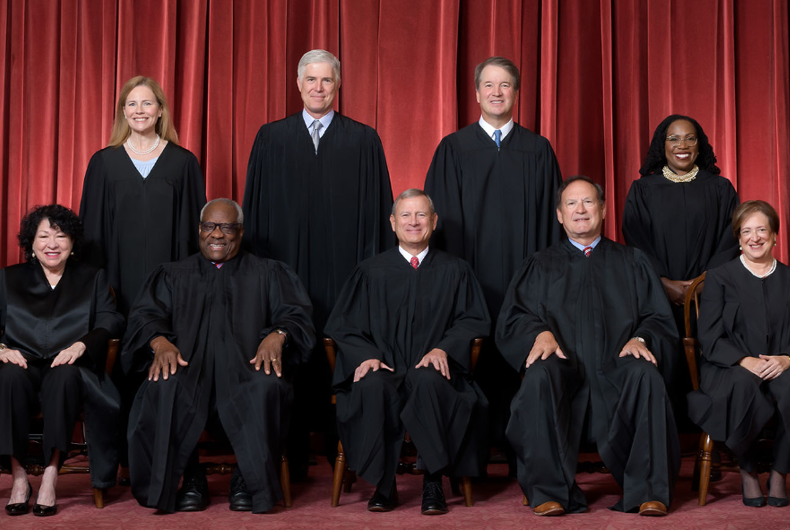 Based on the oral arguments in the case of a Christian web designer seeking to gut nondiscrimination protections, 2023 isn’t looking like a good year for LGBTQ+ rights on the Supreme Court. But it’s not looking like a great year for the Court itself either.

The Court is heading into the new year at a level of disarray and public distrust not seen in modern times. Moreover, there’s little sign that the justices intend to do anything to address the issue, except to possibly make it even worse.

The past year has seen a series of explosive revelations about the Court, starting with the leak of the Dobbs decision overturning abortion rights. The Court has long prided itself on being a closed system, so the idea that an entire draft decision on a major topic could appear in the press a month prior to its release was shocking. Just as shocking, the draft was pretty much the final version, so whoever leaked it did so knowing full well the impact it would have.

As it turns out, there’s speculation that the author of the draft, Samuel Alito, may have been the leaker. The reason is that the former leader of a right-wing group now says that Alito gave major donors of the group a heads-up on another major decision a few years back (Alito denied the report).

The leaks are just one sign of a dysfunctional Court. Alito has given full vent to the sneering side of his personality, publicly mocking foreign leaders who objected to the abortion ruling. Under normal circumstances, this would be a terrible breach of etiquette, but now it’s what passes for normal “own-the-libs” rhetoric from the Court’s conservatives.

Then there’s the conflict of interest problem rife among the justices on the right. On top of the list is Clarence Thomas, whose wife, Ginni, is a would-be seditionist. Despite her deep involvment in Donald Trump’s efforts to overturn the 2020 election results, Justice Thomas has yet to recuse himself from cases involving the January 6 insurrection.

That’s not the only shady example. A representative from an arm of the anti-LGBTQ+ group Liberty Counsel boasted that the group regularly prays with justices in their chambers, despite having cases before the Court (Liberty Counsel said that was a past practice, as if that made it okay).

In a more festive and equally disturbing example, Justice Brett Kavanaugh attended a Christmas holiday party hosted by the head of the Conservative Political Action Coalition (CPAC). Among those in attendance were a who’s who of the right, including Stephen Miller, the loathsome architect of Donald Trump’s anti-immigrant policies. More recently, Miller has been heading a group, American First Legal, which took a lead role in anti-trans ads in the midterms and – oh, by the way – has filed briefs before the Supreme Court.

Just to show you where their loyalties lie, Alito, Kavanaugh, Amy Coney Barrett and Neil Gorsuch showed up at a gala dinner in November held by the Federalist Society, the right-wing legal group that vetted Trump’s judicial appointees, where they received a long ovation for their ruling overturning abortion rights.

Such disregard for the appearance of neutrality is possible because the Supreme Court doesn’t have any ethical guidelines – literally. Unlike any other judicial body in the U.S., the Court relies upon the integrity of the justices to police itself.

Look at where that’s gotten us.

No wonder the public’s trust in the Supreme Court is at historic lows. The conservative wing’s insistence on imposing its own view of society, even if that means overturning precedents, has made the Court seem like just another political player and not a group of legal giants. The attitude of Alito and company seems to be, “Who cares?” As long as they have the power, society can get lost.

As for the Court, it will take years to rebuild the reputation that the right’s disregard for basic ethics has destroyed. Meanwhile, you can count on the partying and praying to keep happening, despite the conflicts they may represent.