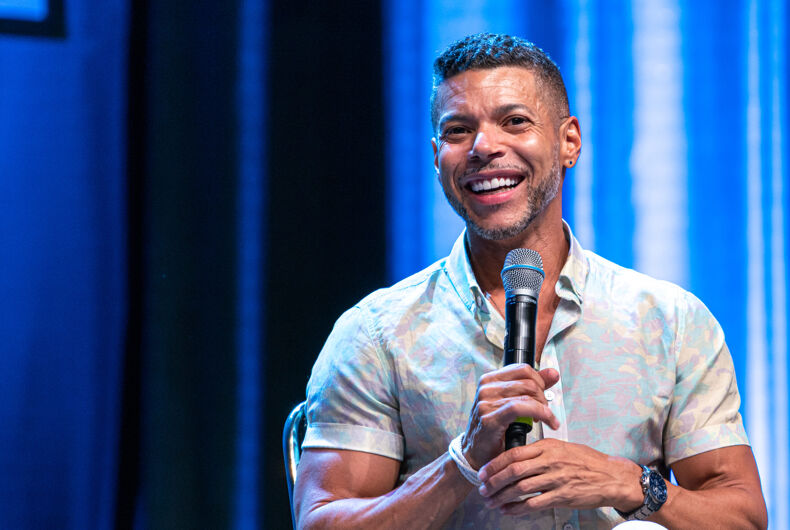 Out actor Wilson Cruz was kicked out of his home after he came out to his dad on Christmas Eve earlier in his life.

In 2020, Cruz told the story on an episode of the At Home With The Creative Coalition podcast and explained that he landed his role as a gay teen on the 90s show My So-Called Life before he had actually come out to his parents.

At the time, Cruz said he was out to basically everybody else in his life, but his parents were the final frontier. He even filmed the pilot for My So-Called Life without coming out to them and without telling them about the show.

A year later, when the show got picked up for production, Cruz knew it was time.

“I made a bet with the universe, the next time one of them asks me, I will come out to them,” he said. “My mother asked first, and it was OK, she had a Catholic Latina mom breakdown and then she was fine.

For the next three months, until My So-Called Life began filming, Cruz alternated between staying with friends and living in his car.

After a year of not speaking to his father, it was an episode from the show that began to change their relationship.

The episode “was about my character’s own situation where he was kicked out of his house because he was gay,” Cruz explained. “Unbeknownst to me, my father watched that episode when it aired and, as the credits are rolling, he calls me and says, ‘I think it’s time that we talk.’”

“That was the beginning of a real relationship with my father, and it all came because of a show that so many people still come to me and say, ‘That show changed my life.’”

Cruz played the groundbreaking character Rickie Vasquez on the show and became the first out gay actor to play an out gay character as a television series regular.

“I took it as an opportunity to shed light on LGBT youth issues and give a voice to young people,” Cruz told Entertainment Weekly in 2018. “I felt like, at that time, there weren’t a lot of people who were willing to take those roles. Here I was, not only willing but excited to take them—and to make a difference because of them.”

Cruz has gone on to act in many gay roles. In 2017, Cruz starred alongside Anthony Rapp as part of the first gay romance in the Star Trek franchise. In 2019, he played a cartoon gay dad in a Hulu children’s show called The Bravest Knight.

This year, when the Florida legislature passed its infamous Don’t Say Gay bill, Cruz reflected on the decision from the site of the Pulse nightclub massacre in Orlando, tweeting: “Almost 6 years after this national #lgbtqia tragedy, Florida has learned NOTHING about how to prevent another Pulse.”

I found myself at #PULSE today only a few minutes after the #Florida legislature passed its violent #DontSayGay bill and sent it to @GovRonDeSantis to sign.

Almost 6 years after this national #lgbtqia tragedy, Florida has learned NOTHING about how to prevent another Pulse. pic.twitter.com/WnB2DqIOQl