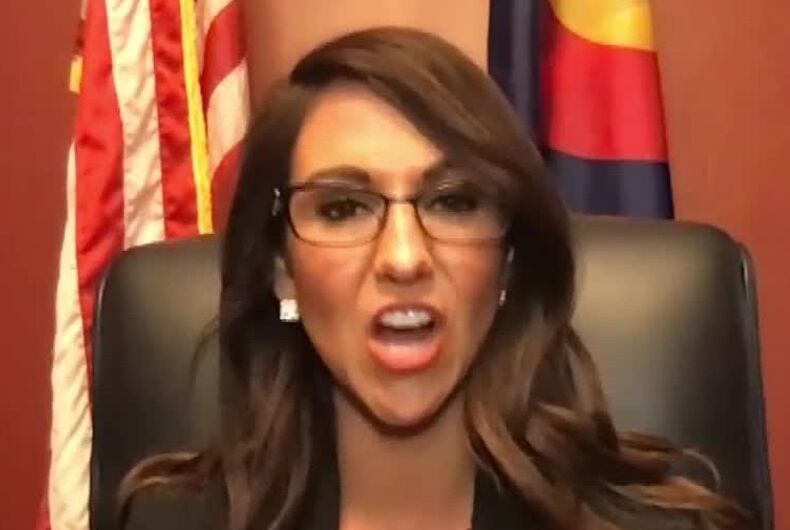 A constituent of transphobic Rep. Lauren Boebert (R-Colo.) has blasted her for embarrassing her district and the entire country.

“After receiving the narrowest congressional reelection margin in the country, U.S. Rep. Lauren Boebert has apparently learned absolutely nothing,” a woman named Carol Cure wrote to The Durango Herald, criticizing Boebert for not standing to applaud “heroic” Ukrainian President Volodymyr Zelensky during his speech to Congress last week.

“During this historic speech, Boebert was seen scrolling on her phone rather than listening, while sitting next to U.S. Rep. Matt Gaetz who was doing the same,” Cure wrote. “She has once again embarrassed her 3rd Congressional District constituents and the entire country.”

Boebert and Gaetz were just two of the 86 House Republicans who attended the speech. The 127 other House Republicans didn’t attend. Boebert, Gaetz, and other far-right Republican congress members have criticized Zelensky’s repeated requests for additional U.S. funding to help fight off Russia’s ongoing invasion.

Far-right Republicans have positioned their opposition to funding Ukraine as a continuation of former President Donald Trump’s “America First” nationalism. Trump and his followers have said that the U.S. should not contribute to foreign battles.

However, while Trump was quick to criticize Ukraine and the leaders of other U.S.-allied nations during his presidency, he never once criticized Russia, even for its aggressive expansion into Ukrainian territory. Since beginning its invasion last February, Russia has attacked civilians and tortured non-combatants in violation of international human rights laws and war crime conventions.

Russia’s President Vladimir has cited anti-LGBTQ politics as part of his reason for attacking Ukraine. The U.S. has sent Ukraine over $68 billion in funds and military support since Russia’s February invasion and recently approved an additional $37.7 billion for the country’s defense.

Boebert and other Republicans, who will control the U.S. House in January, have threatened to cut off any additional funding to Ukraine, even though Russia has signaled its willingness to use nuclear weapons and to attack any U.S.-allied countries who dare to counterattack.

“Until Congress receives a full audit on where our money has already gone, I will not support sending additional money to this war,” Boebert said in video comments that have since been replayed on state-run Russian media.

While Boebert’s refusal to applaud Zelensky may have embarrassed Cure, Boebert’s long and gross history of hateful anti-LGBTQ statements has also embarrassed many of her other constituents — it’s hardly surprising she barely won re-election by under 600 votes.