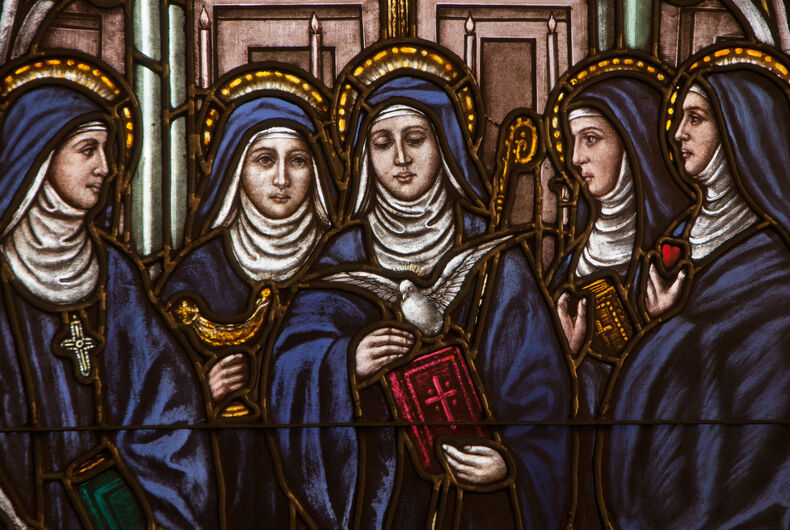 The past year has seen a shocking rise in attacks on the LGBTQ+ community, and transgender Americans have been a particular focus of conservatives and far-right extremists. Coverage in mainstream media outlets has only exacerbated what has become a veritable moral panic by pointing to a supposed rise in the number of young people identifying as trans or nonbinary.

But the truth, as anyone with even a casual knowledge of history will recognize, is that transgender people have always existed, across centuries and cultures. And that apparently includes a surprising and underacknowledged number of early Christian saints.

In a 2020 essay for The Advocate, University of California, Irvine, professor of art history Roland Betancourt writes that “from the fifth to the ninth century, a number of saints’ lives composed across the Greek-speaking Mediterranean detail the lives of individuals assigned female at birth who for a host of different reasons chose to live out their adult lives as men in monasteries.”

In his effort to “pull back the curtain on the neglected history of transgender stories and literatures in early Christianity,” Betancourt name-checks several of these saints. These are a few of their stories:

Betancourt writes that “the night before her execution, the early-third century Christian martyr Perpetua had a dream about her impending death” in which she saw herself transformed into a man. The account comes from Passio sanctarum Perpetuae et Felicitatis (The Passion of Saints Perpetua and Felicity), believed to be written by Perpetua herself. “My clothes were stripped off, and suddenly I was a man,” Perpetua writes of the vision. Betancourt questions the notion that this is simply an indication of “a misogynist pattern of thought that understood the betterment of the feminine through a transformation into the qualities of the masculine when discussing spiritual ascent.”

Betancourt also points to the Legend of Hilaria. Considered a work of fiction, the tale nonetheless led to Hilaria being recognized as a saint. As the story goes, Hilaria was born the daughter of the Roman emperor Zeno. At 18, she disguises herself as a man and travels to Egypt where she lives out the rest of her life as a monk known as Hilarion.

Similar to the Legend of Hilaria, the story of “Marina the Monk” tells of a young woman who lives her life as a monk. Rather than be married off, Marina convinces her wealthy father to allow her to join him when he gives away all his money and joins a monastery. She shaves her head and takes the name Marinos. Marinos was later falsely accused of fathering a child with an innkeeper’s daughter. Forced to leave the monastery, Marinos raised the child. Marinos and the child were later accepted back into the monastery, where they endured harsh penalties. It was only after Marinos’s death that it was discovered that he could not have fathered the child.

This story parallels that of “Marina the Monk.” Euphrosyne of Alexandria was born the daughter of a wealthy family but rejected marriage in favor of the monastic life. At about the age of 13, Euphrosyne’s family was visited by a monk who advised her to disguise herself as a man in order to lead a life of celibacy and asceticism. Euphrosyne later shaved her head and was accepted into a monastery, claiming to be a eunuch. Taking the name Smaragdus, she lived the rest of her days as a monk.

The sixth-century saint Athanasia was married to another saint, Andronicus. After the deaths of their two children, Athanasia dreamed of St. Justin Martyr who told her to dress as a monk. The couple then gave away their wealth and set out for Alexandria, where they parted ways. They met again 12 years later, but Andronicus did not recognize his spouse, who was dressed as a man and had taken the name Athanasius. They continued to travel together as monks and later shared a cell in a monastery, where they died within days of each other.

I accidentally conducted a social media experiment on myself. I really like the results.