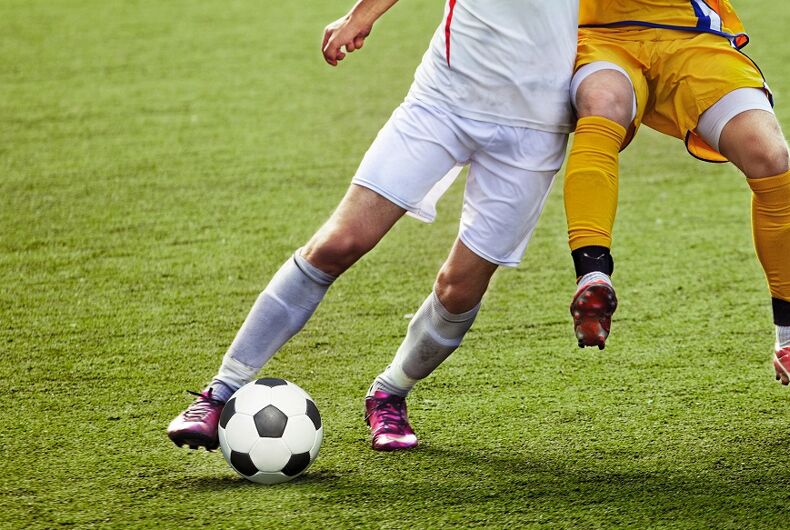 As the start of the 2022 World Cup in Qatar nears, the U.S. men’s soccer team is expressing support for LGBTQ people by displaying a rainbow logo at its training facility in the anti-LGBTQ nation.

The logo – a “USA” with rainbow stripes beneath it – is part of the team’s 2020 “Be The Change” initiative to bring attention to important social justice issues, according to Reuters.

“When we are on the world stage and when we are in a venue like Qatar, it is important to bring awareness to these issues and that is what ‘Be the Change’ is about,” head coach Gregg Berhalter told reporters on Monday.

“It is not just stateside that we want to bring attention to social issues, it is also abroad. We recognize that Qatar has made strides and there has been a ton of progress but there’s some work still to do.”

Qatar is the first Middle Eastern country ever to host a World Cup event. The event, which kicks off on November 20, is expected to draw 1.2 million international visitors. But homosexual acts are punishable by imprisonment and death in Qatar, where Islam is the state religion. Anti-LGBTQ harassment by officials also goes unchecked in the country.

Ever since Qatar was announced as a future World Cup host over a decade ago, activists have criticized FIFA, the international body governing professional soccer, for choosing an anti-LGBTQ country to host the event even though FIFA’s own principles oppose such discrimination.

The country’s officials and World Cup CEO Nasser Al Khater have both said the country will guarantee the safety of LGBTQ visitors as well as fans who display rainbow flags at games. However, the government also said that police may confiscate rainbow flags from fans to prevent them from being attacked by angry locals who oppose LGBTQ rights.

HRW said that from 2019 to 2022 six LGBTQ Qataris — including four transgender women, one bisexual woman, and one gay man — were “detained in an underground prison; verbally harrassed; physically abused; denied access to legal counsel, family, and medical care; and forced to give confession and pledges to ‘cease immoral activity.’”

The individuals were detained on suspicion of “violating public morality” and were released with neither charges nor any record of their detention, something that constitutes unlawful arbitrary detention under international human rights law, HRW told Common Dreams.

The Qatari government called HRW’s claims “categorically and unequivocally false” adding that the country “does not tolerate discrimination against anyone.” Nevertheless, the country’s ambassador to the United Nations reportedly called on God to put a curse on gay people and claimed that “defending human rights has nothing to do with gay rights.”

The U.S. men’s team will reportedly not sport the rainbow colors while playing in the World Cup, but the logo will continue to adorn areas represented by the team.

“Our rainbow badge has an important and consistent role in the identity of U.S. Soccer,” said U.S. Soccer spokesman Neil Buethe.

“As part of our approach for any match or event, we include rainbow branding to support and embrace the LGBTQ community, as well as to promote a spirit of inclusiveness and welcoming to all fans across the globe.”

“As a result, locations that we will manage and operate at the FIFA World Cup, such as the team hotel, media areas and parties, will feature both traditional and rainbow U.S. Soccer branding.”