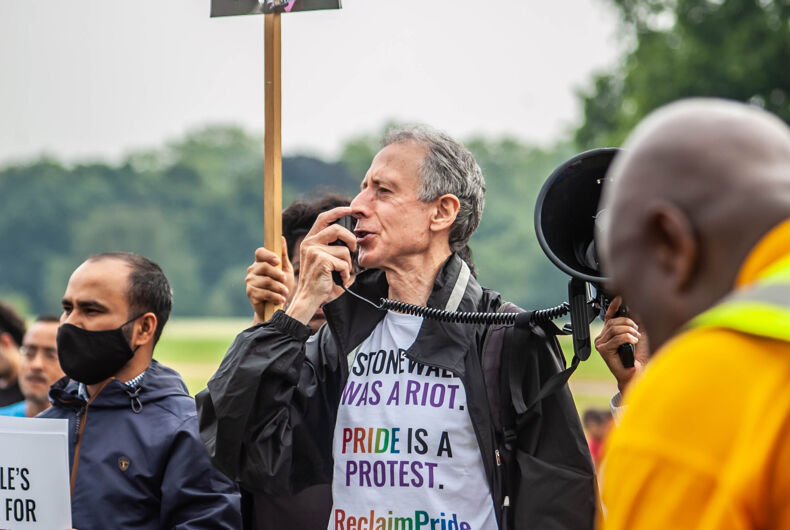 Tatchell said officers arrested and detained him, but the police are denying his claims. The incident highlights continuing tensions over the country’s anti-LGBTQ policies.

Tatchell stood outside of the country’s National Museum for 35 minutes while holding a sign which read, “Qatar arrests, jails, and subjects LGBTs to ‘conversion’ #QatarAntiGay.”

“The first carload of security officials arrived in an unmarked Land Rover and started taking photographs,” Tatchell told The Guardian. “Then, about five minutes later a police car arrived. The police came over and took away the placard and began to interrogate me.”

When Tatchell’s companion began recording the officers, they then allegedly confiscated his phone and deleted the images. Overall, the police “arrested and detained” them on the roadside for 49 minutes, Tatchell said. The men were released without charges.

“The police were not abusive or threatening,” Tatchell said, “but they did make it clear that we should go to the airport and leave the country.”

A Qatar government communications office spokesperson called Tatchell’s version of events “completely false and without merit,” stating, “An individual standing in a traffic roundabout was cordially and professionally asked to move to the sidewalk, no arrests were made.”

In response, Tatchell accused the government of trying to “deflect attention from their diabolical human rights abuses by misrepresenting a peaceful protester.”

Qatar is the first Middle Eastern country ever to host a World Cup event. The event, which kicks off on November 20, is expected to draw 1.2 million international visitors. But homosexual acts are punishable by imprisonment and death in Qatar, where Islam is the state religion. Anti-LGBTQ harassment by officials also goes unchecked in the country.

The country’s officials and World Cup CEO Nasser Al Khater have both said the country will guarantee the safety of LGBTQ visitors as well as fans who display rainbow flags at games. However, the government also said that police may confiscate rainbow flags from fans to prevent them from being attacked by angry locals who oppose LGBTQ rights.

HRW said that from 2019 to 2022 six LGBTQ Qataris — including four transgender women, one bisexual woman, and one gay man — were “detained in an underground prison; verbally harrassed; physically abused; denied access to legal counsel, family, and medical care; and forced to give confession and pledges to ‘cease immoral activity.'”

The individuals were detained on suspicion of “violating public morality” and were released with neither charges nor any record of their detention, something that constitutes unlawful arbitrary detention under international human rights law, HRW told Common Dreams.

The Qatari government called HRW’s claims “categorically and unequivocally false” adding that the country “does not tolerate discrimination against anyone.” Nevertheless, the country’s ambassador to the United Nations reportedly called on God to put a curse on gay people and claimed that “defending human rights has nothing to do with gay rights.”

Ever since Qatar was announced as a future World Cup host over a decade ago, activists have also criticized FIFA, the international body governing professional soccer, for choosing an anti-LGBTQ country to host the event even though FIFA’s own principles oppose such discrimination.

Melanie Chisholm, a former member of the U.K. pop group The Spice Girls, recently said, “[FIFA] can try and spin it that they’re there to make change, that sport can make change, but it’s bullshit. It’s about money…. It’s hard to get fully behind it when you know where the money’s coming from.”

FIFA said Qatar “is fully aware” of its duty to prohibit “discrimination of any kind on account of sexual orientation.” FIFA also said that its staff and Qatari officials would provide “human rights training sessions to public and private security forces in Qatar,” The Washington Post reported.