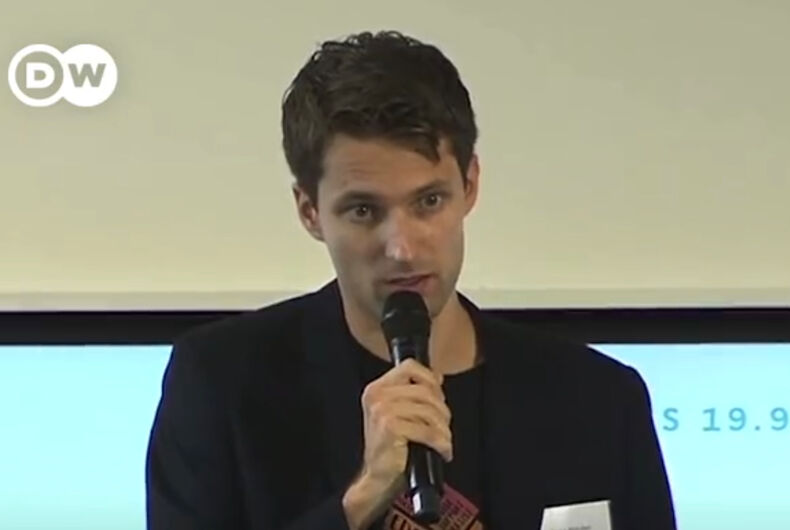 The World Cup is set to take place in Qatar, but two months ahead of the international soccer championship, a representative for fans of the sport is calling on the Middle Eastern nation to change its draconian laws against homosexuality.

At a human rights conference in Frankfurt, Germany, hosted by the German Football Association on Monday, Darion Minden spoke directly to Qatar’s ambassador.

“I’m a man and I love men. I do — please don’t be shocked — have sex with other men. This is normal,” Minden told Abdulla bin Mohammed bin Saud Al Thani. “So, please get used to it, or stay out of football. Because the most important rule in football is, football is for everyone. It doesn’t matter if you’re lesbian, if you’re gay. It’s for everyone. For the boys. For the girls. And for everyone in between.”

Minden implored the ambassador to abolish all of his country’s penalties regarding sexual and gender identity, including the death penalty.

A representative of Germany's association of fan and ultra groups went on stage to speak to the DFB's conference on human rights in Qatar ahead of the World Cup.

Here's his personal speech on LGBT rights in the country, addressed directly at Qatar's ambassador to Germany. pic.twitter.com/ODYZrsYWyq

Homosexual acts are punishable by death in Qatar, where Islam is the state religion. But, as The Washington Blade reports, the country has promised that LGBTQ foreigners will be welcomed at the World Cup, which kicks off November 20.

Al Thani’s response to Minden was not made public, but the ambassador had previously complained that the issue of human rights had become a distraction.

“We all care about human rights,” he said, but noted that he would have enjoyed the “Sport and Human Rights” event if it had focused more on “the enjoyment of football and the football effect on people around the world.”

Elsewhere, San Francisco-based gay Qatari physician Dr. Nasser Mohamed has started a petition urging FIFA and Qatar to protect the rights of LGBTQ Qataris and visitors. According to the petition’s website, the Qatari government is already warning LGBTQ visitors to avoid public displays of affection and threatened to confiscate rainbow flags. The page also features the stories of LGBTQ Qataris, including Dr. Mohamed.

“Visibility of the local LGBT community in Qatar, and the exposure of their treatment, are absolutely essential,” Mohamed wrote in an August op-ed for Outsports. “I am doing my part by speaking up.”

As far back as 2014, former English women’s football player Casey Stoney, an out lesbian, slammed FIFA for awarding the 2022 World Cup to Qatar, vowing not to attend. In 2018, FIFA launched an investigation after several articles dealing with LGBTQ issues were removed from the international edition of The New York Times in Qatar and other countries.

More recently, even unmarried straight soccer fans began reporting that they had been denied hotel reservations due to the country’s laws against sex outside of marriage.