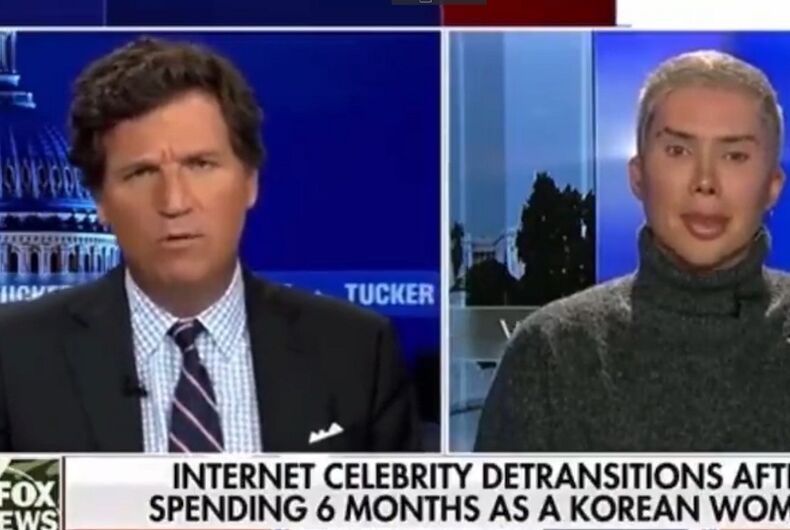 Problematic influencer Oli London is in the news again.

Last week, London joined forces with Fox News’s Tucker Carlson in denouncing what he calls the “radical ideology” of idolizing “weak men like Harry Styles.” According to London, it’s the end of “the alpha straight male.”

After more than a year living as a gender-fluid “Korean,” London, 32, “decided he’s had enough, and now he’s transitioning back to being a British man,” in Carlson’s words. Exactly what traits distinguish British men from other men was left unsaid.

The formerly “transracial” Brit made headlines in 2018 when he paid for 18 surgeries to turn himself “Korean.”

In 2021, London came out in a post-surgery YouTube video as nonbinary with the pronouns “they/them/Korean/Jimin,” in a nod to his obsession with the K-Pop superstar Jimin. He said he’d had a dozen more surgeries to emulate the BTS singer’s look.

In June, he shared what he called “my new official flag for being a non-binary person who identifies as Korean” and said his pronouns were “Them/they/kor/ean.”

This is my new official flag for being a non-binary person who identifies as Korean. Thank you for the overwhelming support it was so hard for me to come out as Them/they/kor/ean 🏳️‍🌈⚧ #olilondon #nonbinary pic.twitter.com/5uJp2dBQU5

That September, another video following rhinoplasty revision and nipple surgery came with the declaration: “I have finally achieved my Jimin look and I feel 100% Korean finally.” A birthday tweet in January explained: “Omg it’s my birthday tomorrow. I hope I become more Korean for my birthday.”

Then in August, London’s journey took a detour with a YouTube channel apology. “I do still identify as Korean, that’s never going to change. But I do want to apologize to the Asian community for my obsession with Park Jimin.”

In the same video, London announced that he had married. “I’ve found someone that genuinely loves me, and he does happen to look like Jimin, and that makes me feel so good.”

K-Pop allowed London to “come out of my shell as a Korean boy, or now Korean girl.”

The apology came after London took a month off from social media. “I know it doesn’t always seem like it, because I’m posting on TikTok all the time, but I am taking a break to reflect on who I am as a person. And I realized I was becoming not a good person.”

He also reflected on “my latest obsession” with Rose from K-Pop band Black Pink, “but I’m trying to control that.”

Then in November, London found salvation.

He revealed to the Catholic News Agency that he didn’t feel right about the surgery and his transition, which he blamed on how popular cosmetic surgery is in South Korea.

The former atheist said he’s finally found acceptance. “This actually kind of saved my life. It’s brought me back to who I am as a person, finding God.” He said he now wants to be baptized by a “very well-respected priest [who] has a good connection with God and [a] strong belief system.”

“I started dressing as a Korean woman, and I realized that was a big mistake” London confessed to Carlson. Now he just wants “to be a boy.”

“Years ago when kids used to go to school, they used to idolize Superman and astronauts,” said London. “Now kids are being pushed this radical ideology taught to idolize weak men like Harry Styles, weak politicians like Beto O’Rourke. Why is this happening?”

He also claimed that there was a “normalization of [being transgender] in schools” that’s turning children trans.

“Children are taught from a young age, from the age of five in some cases, that it’s OK to change their gender, that it’s OK to, you know, wear a skirt, it’s OK for a boy to use a gender-neutral toilet when it puts girls at risk,” he claimed. “This is the new norm, and schools are teaching about toxic masculinity. They’re eroding the alpha male, the alpha straight male is being eroded.”

this is the most watched cable news show in the united states pic.twitter.com/R8TT58RN6S