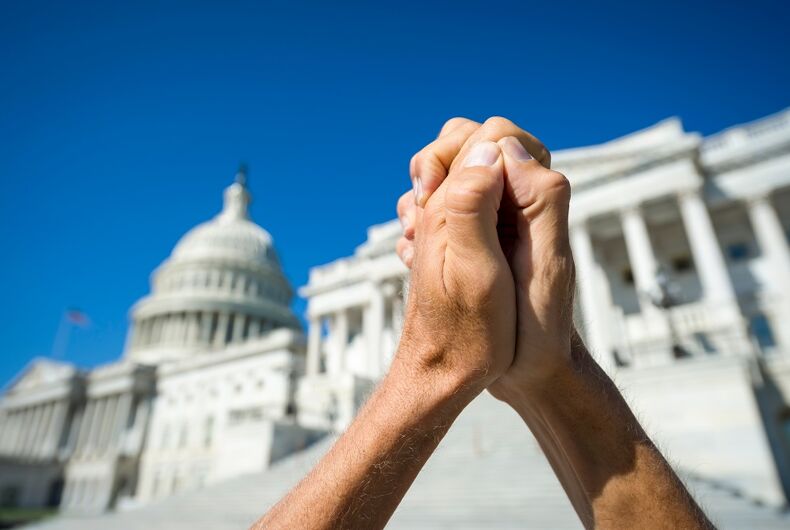 With Republicans poised to take control of the House of Representatives, the lower chamber may get the chance to pass anti-LGBTQ bills that have stalled under Democratic control.

And pro-LGBTQ legislation like the Equality Act, the Respect for Marriage Act, and the PrEP Access and Coverage Act is unlikely to come up for a vote next year.

Despite assurances that they care about states’ rights, Republicans have already shown that they want these bills passed at a federal level. Here are three to expect in the 118th Congress.

Rep. Marjorie Taylor Greene (R-GA) introduced this bill in August 2022 to stop transgender youth from accessing puberty blockers and other forms of gender-affirming health care, despite the evidence that these medical interventions decrease lifelong suicide risk. The Protect Children’s Innocence Act would make it a class C felony for doctors to provide gender-affirming care to minors, carrying a sentence of 10 to 25 years in prison.

Her bill is extreme, but the Republican base’s demands to keep doctors from helping transgender youth have only gotten stronger throughout this past year. With Republicans possibly taking power in January – and being able to decide what gets a vote in Congress – far-right Republican lawmakers like Greene are likely to push for a vote on the Protect Children’s Innocence Act.

The Protection of Women and Girls in Sports Act

Republicans at the state level have had the most success passing bills to ban transgender girls and young women from participating in school sports, effectively banning them from receiving an equal education to their cisgender peers. Eighteen states have such laws.

Rep. Greg Steube (R-FL) introduced the Protection of Women and Girls in Sports in early 2021, at the beginning of the 117th Congress, and he had already introduced the same bill during the 116th Congress. He’ll likely introduce it again in January, except this time, it’s more likely to get a vote than in the previous two Congresses.

The bill does not describe exactly how schools should determine what someone’s sex assigned at birth is, just vaguely stating that “sex shall be recognized based solely on a person’s reproductive biology and genetics at birth” and threatening federal funding to schools that don’t follow the law, leading some to believe that states might require genital examinations for girls’ whose gender is challenged by competitors, an enforcement several states have considered and even passed into law.

Speaking about the Equality Act, Steube said that being LGBTQ is a “rejection of God’s design” of “complementary” sexes “offends God.” He read anti-LGBTQ parts of the Bible, telling Congress, “for the Lord your God detests” people who don’t follow gender roles as determined by sex assigned at birth.

The Stop the Sexualization of Children Act

Rep. Mike Johnson’s (R-LA) bill would be a federal – and much more expansive – Don’t Say Gay law. The Stop the Sexualization of Children Act would cut federal funding to libraries, school districts, hospitals, government entities, or other organizations for “hosting or promoting any program, event, or literature involving sexually-oriented material.”

The most extreme parts of the Republican base have made it clear this past year that they consider any mention of LGBTQ people in the presence of children akin to pedophilia. If House Republican leader Kevin McCarthy (R-CA) is speaker of the House next year, he will face pressure to put this bill up for a vote.

And if Gov. Ron DeSantis (R) – famous for signing Florida’s Don’t Say Gay bill into law – runs for president in 2024, he will undoubtedly be using the issue to drum up support and spread false stories about teachers forcing kids to be transgender like he did as governor earlier this year.

While these bills could pass the House if Republicans take control, they are unlikely to become law with President Joe Biden in the White House. Still, discussing and voting on these bills can be psychologically damaging for the LGBTQ people they’ll affect.

Needless to say, if Republicans take control of the House, progress on LGBTQ equality will come to a halt. The only question will be how much damage Republicans will do.

Are SNL writers boycotting the show because anti-trans comedian Dave Chappelle is hosting?

Gay puppeteer slammed for racist performance with a Black puppet