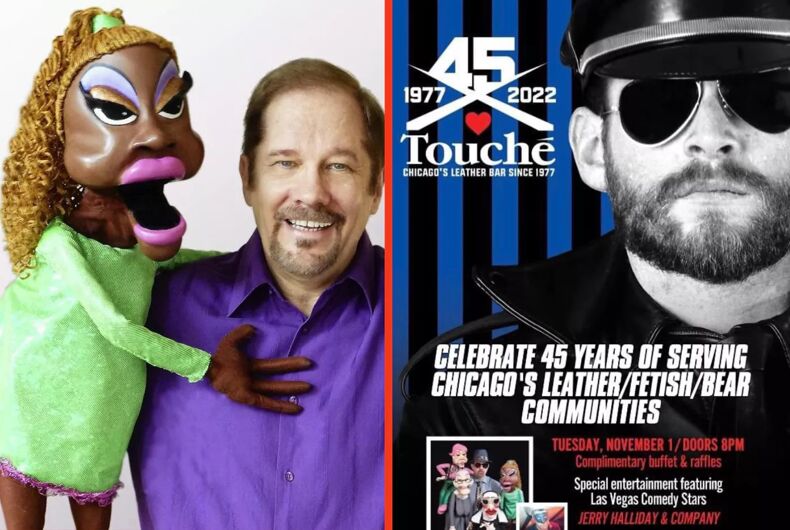 A puppeteer and a leather bar are under fire in Chicago for the puppeteer’s racist performance featuring a Black puppet.

Last week, puppeteer Jerry Halliday was booked for an anniversary show at the Touché bar in Chicago’s Rogers Park neighborhood. The gay comic’s act that night featured one of his rotating ensemble of characters, Sista Girl, “a Black woman trapped inside a white man’s body,” by Halliday’s description at the show.

The act is a throwback to the 1970’s, when impressionists and puppeteers were popular in Vegas showrooms and on TV screens, with acts like closeted comedian Wayland Flowers, who brought elderly and foul-mouthed Madam to life on his lap. The comedy was broad, blue, and built to make the audience cringe.

After a recording of Halliday and Sista Girl hit the internet, the reaction was ferocious.

“Whomever booked this person, I assume the owner, must be racist and want the venue to be a safe space for other racists,” read one comment on the video. Leaving no room for doubt, they added: “That’s the only logical answer.”

The phone footage captured Halliday on stage with his puppet at various points in the show. In one segment, Sista Act flips her dress up to reveal her “Afro puff.” “You wanna know the quickest way to get a man’s attention?” Sista asks. “Just go to the back of the room and go: Yeah! One more time for the blind lesbian in the back. Yeah! There it is, baby, that’s my little Afro puff. My mama called it my little Brillo pad.”

Jerry reveals the doll’s private parts and makes a joke about her ‘afro puff’ pic.twitter.com/wEPdCisEkT

Later, while panning for tips, Sista asks the audience to be generous because she’s got five mouths to feed. “I’ve got five little girls: Mylanta, Propecia, and Levitra, and the twins, Visine and Murine.”

What got the most attention was a clip featuring an audience member calling out Halliday for material he thought was “a little weird for 2022.” The leather bar patron, a buff, bald white man, drink in hand and wearing a Filthy Flamingo Golf Club shirt, walked through Halliday’s stage area talking, attracting the puppeteer’s, and the puppet’s, attention.

“Excuse me?” says Halliday, through Sista. “Shut the f**k up, Mr. Filthy.” The patron says something inaudible and Sista replies: “Well you can kiss my muthaf**n’ ass, b**h. I’ll come out and touch you, baby. Don’t f**k with me honey.”

The patron continues to talk back.

Looking for support, the white guy turns to a harnessed, topless patron of color, asking them, “Really?”

While he continues to make his case loudly off-stage, Sista calls out “Mr. Filthy” again.

“Are you OK with this?” the patron asks the person of color.

“Are you all havin’ a private conversation over there?” Sista asks.

Not for long, as the white patron pipes up. “No, I’m just like, everyone in the crowd thinks this is a little weird for 2022.”

You can hear the guy recording the scene exclaim to himself: “Oop!”

Sista asks the audience: “Everyone wants this man to shut up, make some noise. Clap.” Most of them do, with some boos thrown in. Sista: “Byeeee. Bye, baby.”

Patron: “I will go, but…” He continues inaudibly.

Sista: “Honey, you arguing with a piece of wood, you stupid-ass piece of s**t. Shut your hole, mine’s making money. Thank you very much. Now where was I?!”

The white guy bows slightly and makes his exit across the stage area, the same way he came in.

That’s when Halliday and Sista pick up where they left off, on a hackneyed riff about kindness and respect in the ashes of their on-stage confrontation. After describing every race as all different colors, the bit continued: “We got all kinds of people here tonight. We got Black folks and white folks, young folks and old folks, Republicans and Democrats, even got a Black woman trapped inside a white man’s body. If we can all laugh together, we can all live together. In this world today, there’s too much fussin’ and fightin’. We got to be kind to one another, take care of one another. Respect one another. You with me, brothers and sisters? Everybody say, ‘Ameeeen.'”

Amid the backlash, Halliday retired Sista Girl the very next day.