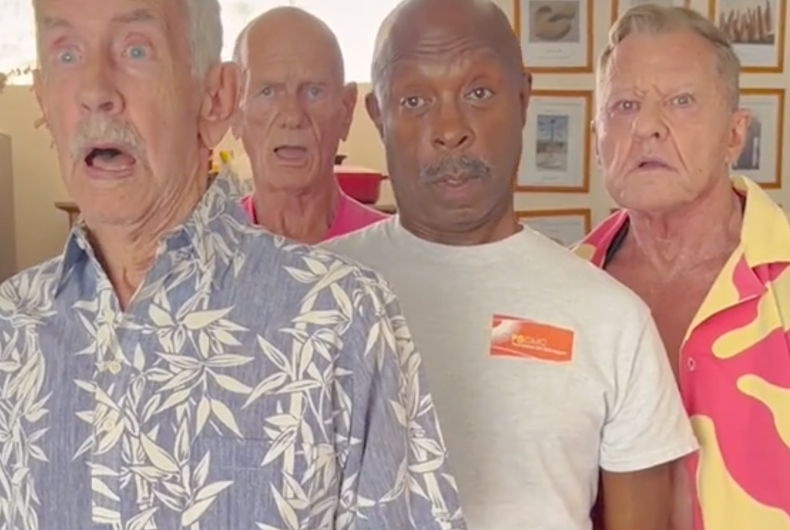 In Cathedral City, CA, four gay men have fashioned a chosen family for themselves among the desert palms, where they gather by the pool daily, support one another fully, and share their best lives with millions of followers on TikTok.

Known by their handle, “The Old Gays,” Robert Reeves, 79, Michael Peterson, 67, and Bill Lyons, 78, share a house in the Coachella Valley oasis near Palm Springs, while Jessay Martin, 69, lives across the street. The three roommates, a kind of modern queer version of The Golden Girls, have lived together for nearly a decade in Reeves’ mid-century modern ranch house. Martin later joined the group as part of their social media adventure. The four have been fast friends ever since.

“The Old Gays” have nearly 9 million followers on TikTok and an eye-popping 1.5 billion cumulative views. Their wildly popular videos are a mix of viral dances, skits, and lip-syncs, and they never pass up the opportunity for a costume change. They also reach across generations to share stories about coming out, their lives as younger men, dating at an older age, and frank discussions about growing older.

Their living arrangement is a growing choice among older Americans. According to a study by AARP, 86 percent of people over 65 would prefer to age in place rather than in a care home, while a Pew Research poll reveals more than a quarter of all older Americans live by themselves. Cohabitating with friends and acquiring roommates like The Old Gays have done is an alternative to both.

The foursome got online shortly after a younger neighbor and producer, Ryan Yezak, 35, met them on his morning dog walks and was excited by their happy, contagious comradery. Now they count among their friends and followers Rihanna, Jessica Alba, Rosie O’Donnell, Drew Barrymore, and Lance Bass.

Earlier this year they shot a dance video with Paula Abdul. While there were no costume changes in the 15-second clip, it prompted one commenter, Wyldmoon, to write: “I love how TikTok makes these kinds of beautiful connections! Yay to ALL of you ❤️❤️❤️”

While the music and dancing inspire smiles, it’s the men’s stories that pull on the heartstrings. In one video, the four share recollections of coming out to the sounds of Grant Knoche’s First Hello. Perhaps the most tear-jerking memory comes from Martin.

Holding a picture of himself and his mom at a younger age, he remembers, “My mom kept asking me: ‘When are you getting married to a woman?’ And so I wrote her a letter telling her I was in a relationship with a man. I told her that I was just happy that I found love. And she felt bad that she couldn’t be there for me. But she always was there, she just didn’t know it.”

Coming out will make you a happier person ❤️ #gay #lgbt

Find “The Old Gays” at tiktok.com/@oldgays, and look for their upcoming book, tentatively titled, The Old Gays’ Guide to the Good Life.