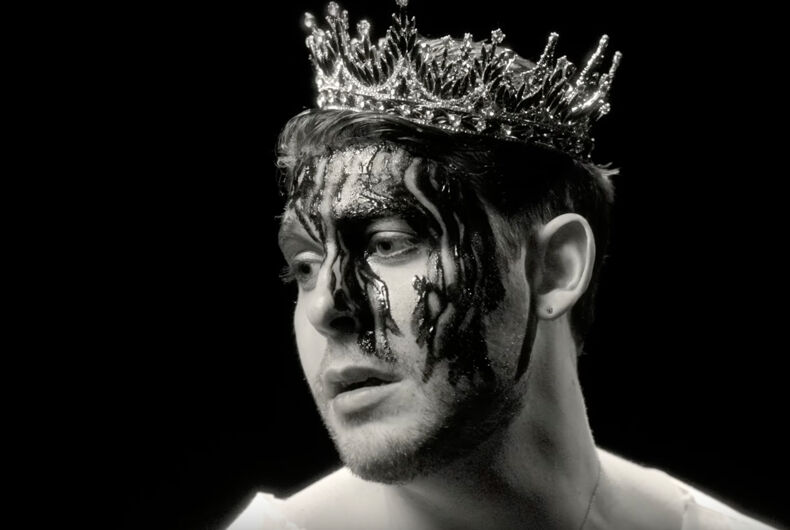 Same Williams in the video for "Tilted Crown"Photo: Screenshot

Sam Williams, the grandson of country music legend Hank Williams, has come out as gay.

The 25-year-old singer recently released the video for his latest single “Tilted Crown,” which deals with his complicated family legacy and depicts him kissing his boyfriend for the first time on-screen.

Williams discussed the video on a recent episode of Apple Music’s Proud Radio with Hunter Kelly. “I felt like I was promoting invisibility, like I wasn’t being visible and wasn’t being myself,” he said. “And I just thought it was the perfect opportunity to just show who I was.”

“I identify as gay, and I’ve never said that to anybody else,” Williams told Kelly. “I mean, people at my label know and people in my personal life know, but this is the first time that I’ve ever been, besides a show or two, that I’ve ever been this public about it.”

The singer’s father, Hank Williams Jr., is an outspoken conservative, and the “Tilted Crown” video depicts a character who very much resembles the elder Williams.

“In that video there’s an older man character that puts the cowboy hat on the little boy, takes his cape off and is kind of aggressive in some of these scenes, and that’s not necessarily playing my dad, that’s playing society as a whole,” Sam explained. “That’s supposed to portray society as a whole and pointing young kids in direction of like, ‘This is what girly girls do. You wear this pink bow and you go to Sunday service.’ Or, like with little boys, ‘You go hunting.’”

Williams also discussed coming out privately to his late sister, who died in a car crash in 2020, as well as originally intending to make a video for his song “Snow Angels” which would have referenced his sexuality.

“If I was a kid, and I was younger, and I saw somebody like myself doing an interview like this and just saying that, ‘This is who I am and I’m proud to be who I am,’ that it would have been impactful for me,” Williams said of coming out. “So I think at the end of the day, that’s one of the most important reasons why I’m being so open.”