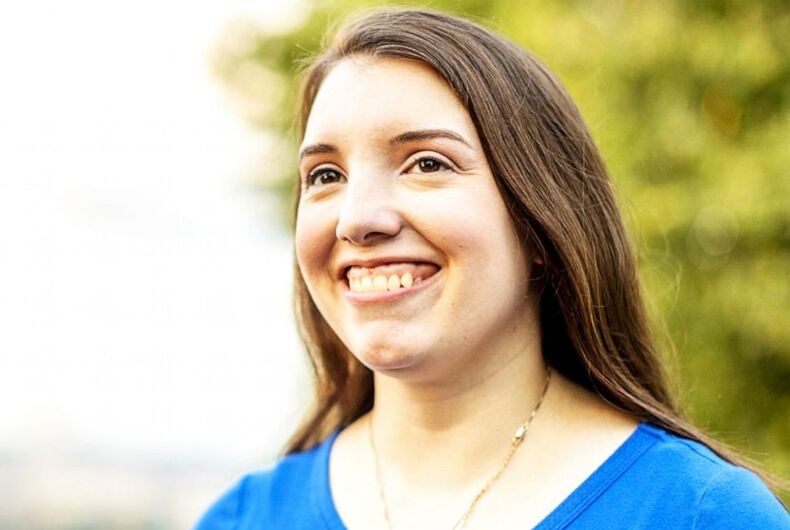 Pennsylvania House Rep. Jessica Benham (D) is the first openly bisexual, queer, and autistic person ever elected to the Pennsylvania General Assembly. As a state representative, she has actively fought for healthcare, a clean environment, disability rights, LGBTQ rights, and fair funding for education.

Jessica Benham At a Glance

In 2014, Jessica co-founded the Pittsburgh Center for Autistic Advocacy (PCAA), an LGBTQ autistic-led advocacy group. There, she assumed the position of Director of Development.

In November 2020, she created history by becoming the first bisexual and queer woman to be elected to the Pennsylvania State Legislature. In that election, she defeated Republican opponent A.J.Doyle after securing 62.5 percent of the votes.

She is currently serving as the Pennsylvania House Representative in District 36. She lives in the South Side Slopes neighborhood of Pittsburgh, with her cat, Ravi.

Jessica Benham was the first out queer and bisexual woman house representative elected to the state legislature of Pennsylvania. Even before jumping into politics, she has been a fierce advocate of the LGBTQ community.

She founded the Pittsburgh Center for Autistic Advocacy (PCAA), the only LGBTQ autistic-led grassroots advocacy group in the Greater Pittsburgh area. She served as its Director of Development.

As the first-term House Representative of the Pennsylvania House District 36, she also serves as an LGBTQ+ Equality Caucus member.

Benham has said, “I believe that same-sex couples should have the same freedom to get married as straight couples.”

She also shared a Facebook post on the 7th anniversary of the Supreme Court’s 2015 landmark Obergefell v. Hodges decision, noting that “many people with disabilities still do not have the ability to marry their loved one without losing life-sustaining benefits.”

She co-sponsored a 2021 bill to amend state statutes to repeal legal provisions that excluded same-sex couples.

As of 2022, same-sex adoptions are legal in Pennsylvania. However, when asked a question by Pittsburgh Lesbian Correspondents about same-sex adoption and other LGBTQ rights, Benham said it’s important for voters to elect Democratic representatives to stop legislation that would significantly limit LGBTQ rights.

In April 2022, Benham voted against the Fairness in Women’s Sports Act that aimed to ban transgender girls and women from participating in women’s sports. She denounced the bill as discriminatory.

“I care about protecting women’s sports and know that transgender girls in no way threaten them,” she said. “This bill is a complete invasion of young people’s privacy in response to a non-existent issue. It’s also likely an unconstitutional violation of transgender people’s rights.”

In 2021, Benham co-sponsored a bill with out state Rep. Brian Sims (D) to amend the Public School Code of 1949 to ensure that schools enact comprehensive sex education that included “reproductive rights, equality, and gender equality.”

“It’s on all of us to make sure that every student, regardless of who they are, feels safe and protected on their campus … and has the resources and support they need to succeed,” Benham said.

She is also a strong proponent of the Pennsylvania Safe Schools Act which includes anti-bullying efforts, mental health support, and inclusive practices for supporting the well-being of LGBTQ and other students.

Benham supported the reintroduction of the Fairness Act, a bill that would extend non-discrimination protections in housing, education, and public accommodations access to everyone, irrespective of gender and sexual identity.

When Republican state legislators helped defeat the act, Benham said, “[The Republican] caucus has spent years refusing to allow the Fairness Act to come out of committee to a floor vote. I can’t speculate on their motivation, but based on their actions or lack thereof, I am left to wonder if they actually support equal rights for people like me.”

Benham has written publicly in opposition to violence against transgender individuals. Her state’s hate crime laws do not include gender identity or sexual orientation.

Benham voted to remove homosexuality as criminal behavior in Pennsylvania.

Her group. the PCAA, partnered with SisTers PGH to offer sensory-friendly places to allow autistic people’s participation in LGBTQ spaces and events.

Jessica Benham is a bisexual and queer person who has a demonstrated history of being an advocate for LGBTQ rights.

Stay informed about her career by subscribing to the LGBTQ Nation newsletter.

A trans woman & essential worker moved mid-pandemic for work. She was beaten to death.