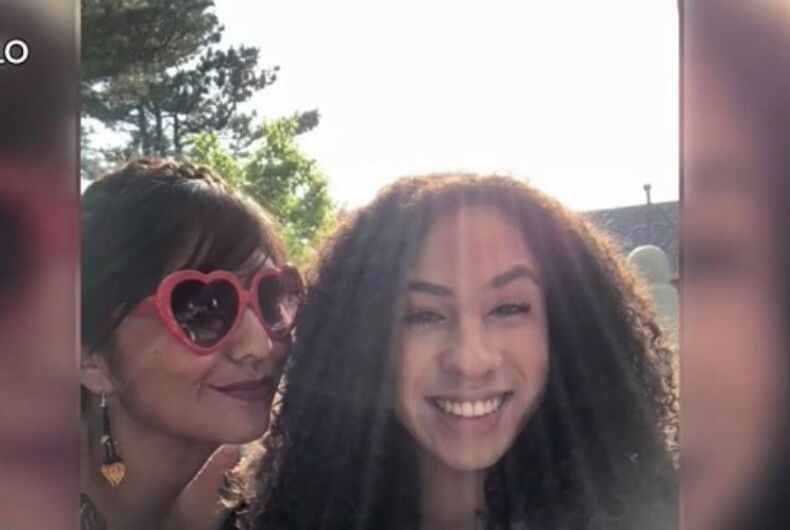 Chyna Carrillo, a Latinx trans woman, was killed on February 18, 2021, outside her home in New Wilmington, Pennsylvania — as police ordered her murderer to stop.

Facts leading up to her death are still unpublicized, but police were called to Carrillo’s residence around 11:00 AM and found Juan Carter Hernandez beating her with a “blunt object” in broad daylight. After he refused to stop, an officer shot and killed him. Carrillo was taken to a nearby hospital where she succumbed to her injuries.

Now police in the small, western Pennsylvania town of a little more than 2,000 are investigating two deaths.

It is also reported that this same Juan Carter Hernandez had been sent to prison for murdering his wife in 2013. He previously lived in neighboring Ohio, then relocated to North Carolina with his girlfriend, Kandace Hernandez, who he would marry — and eventually gun down in July 2011. Kandace was only 20 when she was murdered.

He was was sentenced to eight to ten years in prison in 2014 as part of a plea agreement that also dismissed other charges of assaulting a government official, presumably a correctional officer, while in prison. When he was released from prison isn’t immediately clear, and police in either Pennsylvania or Ohio have yet to confirm the connection.

At the time, Carter Hernandez was wanted on a federal indictment of desertion for skipping out on active duty as a former Marine. He also had charges on his record in Ohio with multiple assault charges.

“I just scream. This should not have happened. I knew it was going to happen,” Kandace’s mother, Tammy Larew, said after learning about this instance of violence. As evidenced by previous calls to the Hernandez home on suspicion of domestic abuse, Larew remembers that “Kandace was on the phone with my husband six minutes before she was killed, wanting a bus ticket home.”

Larew wanted prosecutors to go to trial and prosecute Carter Hernandez to the fullest extent of the law. “They say there wasn’t enough evidence and they were going to get him to take a plea deal, and I did not want that,” she said.

Now, she believes, Carrillo is the person who paid the price due to their decision.

Although Carter Hernandez is gone, Larew is still not at peace. “A few people ask me, ‘Do you feel that you got justice now because he’s gone?’ No. I mean, he’s gone, but he still did what he did to my daughter and to Chyna.”

Meanwhile, another family mourns an apparently senseless death. Chyna Carrillo, also known as Chyna Cardenas, was going to turn 25 on March 3, only two weeks from the date of her death.

Now family and friends are remembering the late certified nursing aide, who moved from Springdale, Arkansas to the New Castle, Pennsylvania-adjacent community in April 2020 to work at a nursing home care facility hit hard by COVID-19 early on in the pandemic. The house she lived in was owned by the company she worked for.

I don’t even know how to begin this post. This is my niece Chyna. My lovely magical mermaid. One of my favorite…

She was full of love and light. Her smile was contagious. She never met a stranger. She loved to hug and gave the…

Carrillo’s mother, Lilia, heard from local police about her daughter’s death. “They said well something happened, I said, is my kid OK,” Carrillo recalled, “and he said no. I knew she was gone.”

“I love my kid with all of my heart and now she’s gone. She’s not coming back,” she said according to WKBN. “I’m going to be celebrating a birthday with an angel in heaven.”

Chyna’s childhood friend, Patrick Irish, said his life “would light up” when she was around. “Her move to Pennsylvania was supposed to be a new start for her. I was really excited to see that for her, and to see that someone decided it was her time, it’s been so painful.”

The Human Rights Campaign mourned her death on February 19, reporting her as the seventh known violent death of a trans or gender non-conforming person in 2021 so far.

“Chyna was very young and did not deserve to have her life cut short. Already in 2021, we’ve lost too many trans lives,” Tori Cooper, the Campaign’s Director of Community Engagement for the Transgender Justice Initiative, said in a statement.

“If this alarming rate of fatal violence persists, we will either match or surpass last year’s total number of 44 deaths, which marked 2020 as the deadliest year on record for our community. We must speak up and speak out. Everyone must take action to end the violence against our community and we must do so together as one LGBTQ community,” Cooper declared.

A vigil is being held today in the New Castle area in Chyna’s honor. The officer that shot and killed Carter Hernandez is on administrative leave pending an investigation.

Heartbroken to hear the news about #ChynaCarrillo, a Trans woman from Springdale, Arkansas who was murdered on Thursday, February 18 in New Wilmington, PA.

Chyna described herself as a “Proud TransLatina, outspoken and unapologetic. Rest In Peace and power hermana ✊🏽#SayHerName pic.twitter.com/ZupzXe7Leo

There is a lot of heartbreak in Springdale today.
We need a hate crimes law that protects all, including transgender Arkansans, from hate-motivated violence. And we don’t need laws that permit & embolden discrimination against trans Arkansans.
❤️ to the family of Chyna Carrillo.

Heartbroken to learn of the murder of Chyna Carrillo, a Latinx Trans woman, in New Wilmington, PA. Trans women deserve to live in a world that respects, cherishes, and values them. I’ll keep fighting for that world, and mourning for each life lost.

All of us, no matter how we look or who we love, must feel safe in our homes, our jobs, and our communities. I’m horrified to learn of the murder of Chyna Carrillo. The violence towards trans women and Black trans woman in particular needs to stop. #sayhername #ChynaCarrillo