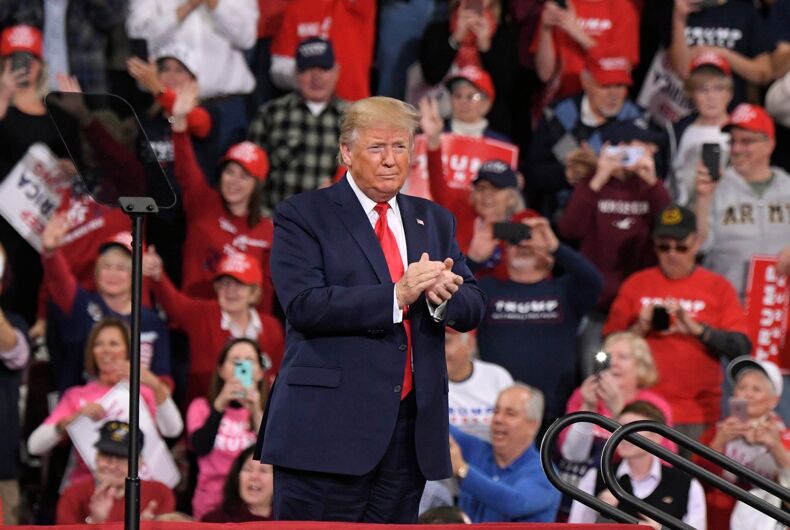 The Allegheny Democratic Party endorsed a Trump supporter who posts anti-transgender screeds on social media instead of a fellow primary candidate who is a progressive and bisexual.

Now the state party and influential Democratic backers are denouncing the decision and vowing not to support the candidate if she wins the primary.

The party also endorsed a challenger to the only black female representative from the area. Labor groups, progressive organizations, elected officials, and the state Democratic party have all condemned the endorsement.

Candidate Heather Kass has railed about Obamacare, said she wished addicts would overdose to save public funds, and called people on public assistance “lazy no good idiots.”

“Junkies get everything we should just make the drugs legal let them OD and less s— in the world…” she wrote on Facebook. The county is one of the hardest hit by the nationwide opioid crisis.

Her opponent, Jessica Benham, is a bisexual disability advocate who is also autistic. She has been endorsed by the LGBTQ Victory Fund; she would be the first LGBTQ woman elected to the Pennsylvania state legislature.

“I will continue running the same campaign that I always intended to run—one focused on talking to the full electorate who will be voting at the end of April and continuing to learn about the issues important to them, not one that aims to please a small group of political insiders,” Benham told LGBTQ Nation. “I look forward to continuing to champion issues important to people in my district, as well as causes specific to people with disabilities and LGBTQ people. I hope to be the first out LGBTQ+ woman in the Pennsylvania state legislature and the first openly autistic state legislator elected in the country.”

The Philadelphia Inquirer reports that two state representatives and a city councilor whipped votes for the endorsement. The local chapter operates its endorsements separately from the state party.

“Anyone who is supporting or whipped votes for Heather Kass should be ashamed of themselves,” State Sen. Lindsey Williams (D) tweeted after the decision. She went on to name the three men who reportedly advocated for the endorsement to stymie Benham’s momentum.

“I confronted him about it,” she said. “He told me it’s about stopping Jessica’s momentum, not about backing Heather Kass. I’m really pissed about this whole situation.”

“If you look at the comments that Heather Kass made, they weren’t 25 years ago, they’re recent. She says things like this, supports Trump and she blows Jess out of the water? We have candidates outwardly spewing anti-Democratic Party values getting the endorsement. [Kass] thinks gender identity is a joke, thinks people with substance abuse issues deserve to die and she gets the endorsement. We should all be taking this personally. What the f**k is going on here?”

“I do take it personally as someone with a preexisting condition that the endorsement goes to someone who calls themselves a Democrat and rails against the Affordable Care Act, something that allows me to have health insurance,” Benham said. “She knocks people who aren’t straight, mocks people who believe in common-sense gun laws and supports Donald Trump. So, yes, I take what happened today very personally.”

“Heather Kass is in open revolt against many of the core principles of the Democratic party – including its support for LGBTQ equality,” said Sean Meloy, Senior Political Director at LGBTQ Victory Fund and a member of the Allegheny County Democratic Committee.

“For her to receive the Allegheny County Democratic Committee endorsement is appalling and exemplifies the sort of good old boys politics voters are continuing to reject. It is clear those members of the committee feared a change agent like Jess Benham – a queer woman with a disability who is outspoken in her support for equality, affordable healthcare and the labor movement.”

Bookstore trolls J.K. Rowling by donating money from her book sales to a transgender charity

226 bills target LGBTQ Americans this year. One organization is behind a lot of them.