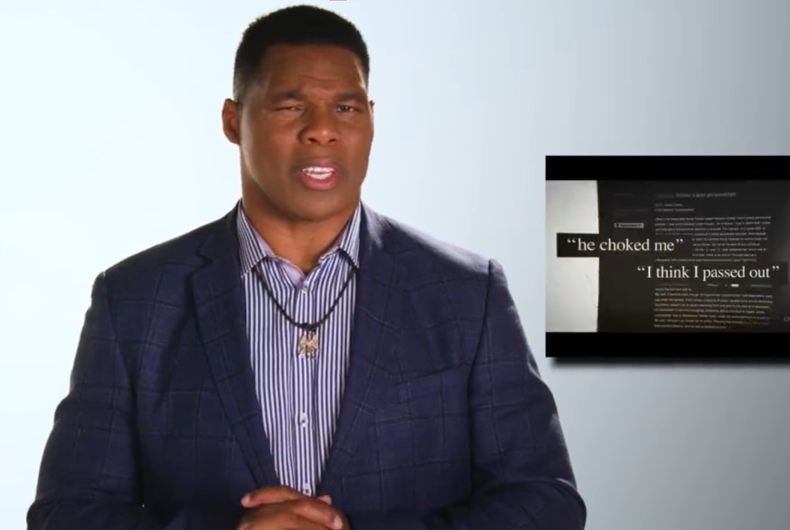 Former NFL player Herschel Walker, who is now running for Senate as the Republican candidate in Georgia, called his 23-year-old son Christian Walker “ugly” when he was a baby and “streetwise, dumb as a brick” now.

“When I delivered him, he had this long old head,” Walker said in a video of comments he made in 2019 that have resurfaced online. “No, seriously. He looked like an alien. I told my wife, ‘Have your parents got some awful genes and stuff?'”

“You said, no matter how ugly your child is, you think he’s pretty,” he went on. “So they clean Christian up and stuff, and they clean him up, and I put the cap on top of his crown and stuff and stuff, and I think, he’s not that bad and stuff.”

He said that Christian Walker was next to a newborn girl who Herschel Walker said was “beautiful.”

“I’m looking at Christian, and I’m looking at her, and I go, wow, I’m gonna slide her over a little and stuff because everybody’s gonna come to that window and go ‘Wow, that’s a beautiful little girl’ and then they’re gonna look at Christian Walker… ‘Woah, X-Files, like he’s an alien,'” he said.

Speaking to soldiers, Herschel Walker described his “dumb as a brick”-streetwise son, Christian, as an “ugly” baby with a “long head” that “looked like an alien” from the “x-files,” and blamed his wife’s “awful genes.”

Walker said that his son, who at that point was 19 years old, was a “smart kid.”

“Book-wise, he’s extremely smart. Streetwise, he’s dumb as a brick,” he said. Christian Walker would become a popular gay, conservative TikToker whose shtick is yelling at his phone about everything that angers him, like deadbeat dads, LGBTQ Pride, and Starbucks employees.

In another video, Herschel Walker said that he “rounded” his son’s head “every day” and that “made him smart.” He said he learned how to “polish his head” and said his infant son’s head got rounder.

Herschel Walker went on to say he “polished” and “rounded” his son’s head “everyday” and then his son “looked like [his] side of the family.”

Walker claimed the polishing process on his son’s head “made him smart.” pic.twitter.com/CKnxqadvKY

Warnock got 49.4% of the vote in November’s general election and Walker got 48.5% of the vote. Because of a Georgia law that requires a winning candidate to get over 50% of the vote, Warnock and Walker will face off in a runoff election on December 6.

Numerous women have come forward saying that they have had children fathered by Walker or have been pressured to abort their pregnancies by Walker. Christian Walker says that he and his mother had to move six times to escape his father after he threatened to kill them.

Christian Walker’s mother and Herschel Walker’s ex-wife Cynthia Grossman – the woman who he asked if she had ugly genes – has said that Herschel Walker physically abused her and threatened to shoot her.

Herschel Walker claims that all the new accusations from this year are lies. He has not denied his physical abuse of Grossman, which he claims he doesn’t remember.

Herschel Walker has a history of anti-LGBTQ statements, including mocking people who share pronouns and transgender people in the military even though he never served in the military.