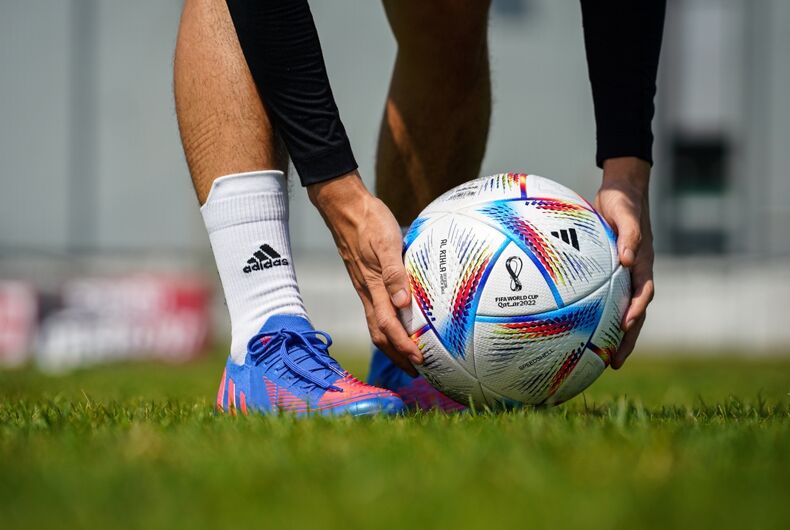 Following a decision by team captains on Monday to abstain from an on-field pro-LGBTQ protest, out BBC Sport correspondent Alex Scott made her views clear when she defied Qatari authorities by wearing the One Love armband on the pitch.

“England may not be wearing the #OneLove armband, but @AlexScott is right now on BBC. This is more than just LGBTQ+ rights, this is Human Rights,” tweeted one fan while watching the coverage live.

Scott’s protest came after England’s captain and several other European teams backed down from wearing the armband following threats from FIFA to yellow card teams defying a ban on unauthorized attire.

It’s the latest sign of disconnect between what FIFA promised players and fans and what they and Qatari authorities are delivering.

Despite FIFA’s official line that “Everyone is welcome,” the slogan has not extended to what Qatari authorities view as signs of protest.

“’You have to change your shirt,’ one guard told me. ‘It’s not allowed.’” Moments after posting about the order, another guard ripped Wahl’s phone from his hand.

Just now: Security guard refusing to let me into the stadium for USA-Wales. “You have to change your shirt. It’s not allowed.” pic.twitter.com/TvSGThMYq8

During a half-hour detention, Wahl was yelled at, told his shirt was “political,” and was refused access to his phone. A passing New York Times reporter who inquired about Wahl was also briefly detained.

“Both FIFA and US Soccer representatives told me publicly that rainbows on shirts and flags would not be a problem at the Qatar World Cup,” Wahl, who is straight, wrote after he was released. “The problem is they don’t control this World Cup. The Qatari regime does, and it keeps moving the goalposts.”

On Tuesday night, Brazilian journalist Victor Pereira was accosted when he was leaving Lusail Stadium after Saudi Arabia’s shock win over Argentina, when a regional Brazilian flag, which features a rainbow, was mistaken for an LGBTQ pride flag.

“This guy wearing a white dress grabbed the flag, threw it on the ground, and started stomping on it. I took my phone to record a video, but he grabbed it from my hand and said he would only give it back if I deleted the video,” Pereira told Reuters.

“Then an officer arrived and tried to intervene. He grabbed the phone from the other guy and ordered me to delete the video.”

According to another report, a U.S. supporter traveling by train to a game was threatened for carrying a small rainbow flag. The aggressor warned he would “kill” the man because “that flag is banned in this country”.

The U.S.-Wales game was the site of another confiscation when security guards confronted female fans wearing rainbow-patterned bucket hats. Their hats were seized, while male fans passed through unaccosted.

Welsh LGBTQ ultra The Rainbow Wall, posted to Twitter: “Not the men, just women. @FIFAcom ARE YOU SERIOUS!!”

Our rainbow bucket hat. We are so proud of them, BUT news on the ground tonight is our welsh female supporters wearing them in #Qatar are having them taken off them, Not the men, just Women. @FIFAcom ARE YOU SERIOUS !!#LGBTQRights 🏴󠁧󠁢󠁷󠁬󠁳󠁿🏳️‍🌈🏳️‍⚧️#WeBelong | #NoPrideWithoutAll pic.twitter.com/bvo9y51WzG

A fresh protest came from Team Germany Wednesday before their first game. The players, who were among those shut down after planning to wear the One Love armband, and whose plane was diverted to neighboring Oman because it displayed a “Diversity Wins” logo, covered their mouths for their team photo.

“Denying us the armband is the same as denying us a voice,” the team wrote on Twitter. “Human rights are non-negotiable.”

We wanted to use our captain’s armband to take a stand for values that we hold in the Germany national team: diversity and mutual respect. Together with other nations, we wanted our voice to be heard.