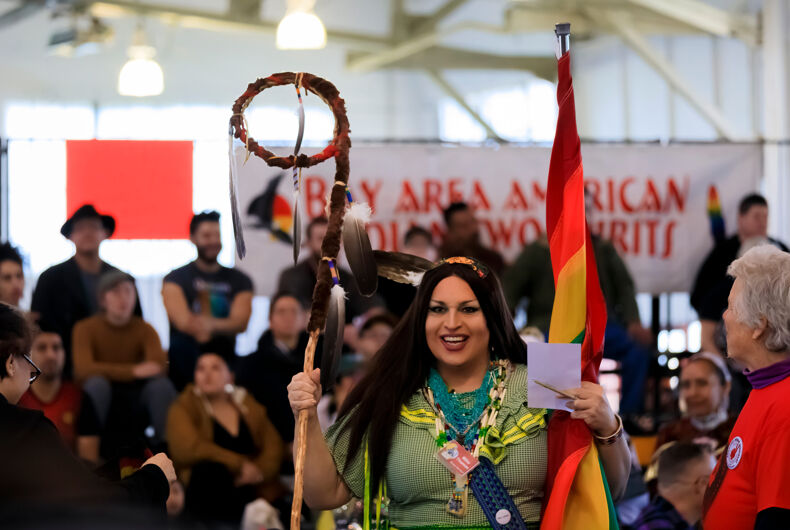 San Francisco, USA - February 08 2020: Native American Indian two spirit person holds a traditional Grand Entry eagle staff and rainbow flag at powwowPhoto: Shutterstock
Preparing for the Thanksgiving holiday reminds me of the autumnal harvest time’s spiritual significance. As a time of connectedness, I pause to acknowledge what I have to be thankful for. Also, I reflect on the holiday as a time of remembrance – historical and present.
Historically, I am reminded that for many Native Americans, Thanksgiving is not a cause of celebration but rather a National Day of Mourning. Since 1970, Native Americans have gathered at noon on Coles Hill in Plymouth to commemorate a National Day of Mourning on this U.S. holiday. For the Wampanoag nation of New England, whose name means “people of the dawn,” this national holiday is a reminder of the real significance of the first Thanksgiving in 1621 as a symbol of persecution of Native Americans and their long history of bloodshed with European settlers. In 1990, President George H.W. Bush ironically – if not ignorantly – designated November as “National American Indian Heritage Month” to celebrate the history, art, and traditions of Native American people.
I am also reminded of my Two-Spirit and LGBTQ Native American brothers and sisters. Many of them struggle with their families and tribes not approving of their sexual identities and gender expressions, as many of us do with our families and faith communities.
“Yes, there’s internalized homophobia in every gay community, but as Native Americans, we are taught not to like ourselves because we’re not white. In our communities, people don’t like us because we’re gay,” Gabriel Duncan, member of Bay Area American Indian Two Spirits (BAAITS), told the Pacific News Service.
And consequently, many Two-Spirit and LGBTQ+ Native Americans leave their reservations hoping to connect with the larger LGBTQ community in urban cities. However, due to racism and cultural insensitivity, many feel less understood and more isolated than they did back home.
But homophobia is not indigenous to Native American culture. Instead, it is one of the many devastating effects of colonization and Christian missionaries that today Two-Spirits may be respected within one tribe yet ostracized in another.
“Homophobia was taught to us as a component of Western education and religion,” Navajo anthropologist Wesley Thomas has written. “We were presented with an entirely new set of taboos that did not correspond to our own models and focused on sexual behavior rather than the intricate roles Two-Spirit people played. As a result of this misrepresentation, our nations no longer accepted us as they once had.”
Traditionally, Two-Spirits symbolized Native Americans’ acceptance and celebration of diverse gender expressions and sexual identities. They were revered as inherently sacred because they possessed and manifested both feminine and masculine spiritual qualities believed to bestow upon them a “universal knowledge” and special spiritual connectedness with the “Great Spirit.”
The Pilgrims, who sought refuge here in America from religious persecution in their homeland, were correct in their dogged pursuit of religious liberty. But their practice of religious liberty came at the expense of the civil and sexual rights of Native Americans. And the Pilgrims’ animus toward homosexuals impacted Native American culture and shaped Puritan law and theology.
In New England, the anti-sodomy rhetoric had punitive, if not deadly, consequences for a newly developing and sparsely populated area. The Massachusetts Bay Code of 1641 called for the death of not only heretics, witches, and murderers but also “sodomites,” stating that death would come swiftly to any “man lying with a man as with a woman.” And the renowned Puritan pastor and Harvard tutor, the Rev. Samuel Danforth, in his 1674 “fire and brimstone” sermon, preached to his congregation that the death sentence for sodomites had to be imposed because it was a biblical mandate.
Because the Pilgrims’ fervor for religious liberty was devoid of an ethic of accountability, their actions did not set up the conditions requisite for moral liability and legal justice. Instead, the actions of the Pilgrims brought about the genocide of a people, a historical amnesia of the event, and an annual national celebration of Thanksgiving for their arrival.
As we get into the holiday spirit, let’s remember the whole story of the arrival of the Pilgrims and other European settlers to the New World.
In this spirit, we can all stand on a solid rock that rests on a multicultural foundation for a truthful and honest Thanksgiving. And in so doing, it helps us remember and respect the ongoing struggle all our Native American brothers and sisters face every day – particularly on Thanksgiving Day.
Commentary
American Indians, National Day of Mourning, Native Americans, Thanksgiving