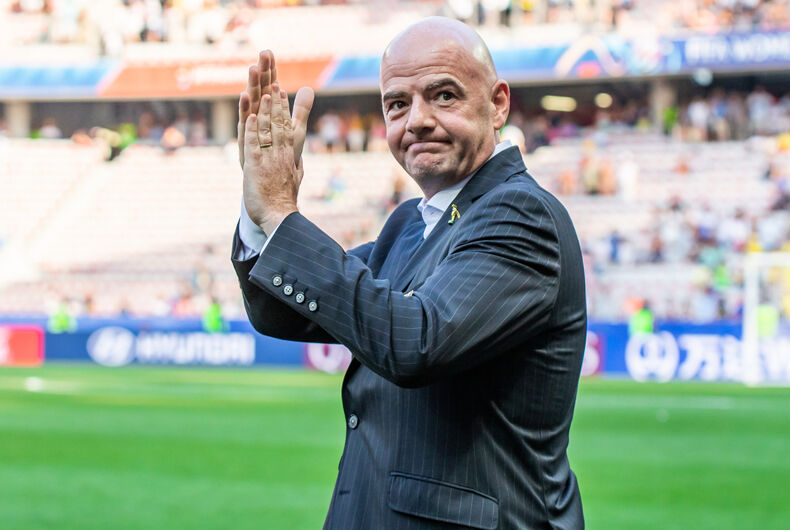 Over the weekend, controversial FIFA president Gianni Infantino went on an hour-long harangue at a Qatar news conference that opened with his own “I am Spartacus” moment: “I feel gay” said the 52-year-old straight Swiss-Italian.

Infantino went on to address many of the same concerns first raised since conservative-Muslim Qatar was awarded the World Cup in 2010, including the medieval treatment of LGBTQ individuals in the Persian Gulf nation. Homosexuality is illegal in Qatar and punishable by death.

However deep his empathy, Infantino and FIFA have done little to address the issue publicly. Infantino has been president of international soccer’s governing body since 2016.

Infantino explained he’d been bullied at school because he had red hair and freckles, and recommended Europe apologize for their own history of exploitation before casting stones. “We should be apologizing for the next 3,000 years before giving moral lessons to people.”

After reminding the 400 journalists assembled, “We are in a sovereign country,” Infantino went after LGBTQ advocates. “Let me mention as well the LGBT situation. I’ve been speaking about this topic with the highest leadership of this country, several times, not just once and they have confirmed and I can confirm that everyone is welcome.”

“If a person says the opposite, it’s not the opinion of the country and it’s certainly not the opinion of FIFA. Everyone who comes to Qatar is welcome. Whatever religion, race, sexual orientation, belief. This is our requirement and the Qatari state sticks to that.”

In a German TV interview two weeks ago, Qatari World Cup ambassador Khalid Salman described homosexuality as haram, or forbidden, and “damage in the mind.”

“They have to accept our rules here,” said Salman.

On Sunday, a Lufthansa flight carrying the German team was diverted to the neighboring kingdom of Oman after Qatar denied landing rights to the jet emblazoned with the words “Diversity Wins.”

A planned pro-LGBTQ protest Monday, organized by European teams, would have seen captains wearing the “One Love” rainbow armband, with England, Wales, and the Netherlands sporting the unauthorized kit at Monday’s games.

We are uniting with nine other European countries in support of OneLove, a campaign that will use the power of football to promote inclusion and send a message against discrimination.

But FIFA rules designed to stifle protest squashed the plan.

“FIFA has been very clear that it will impose sporting sanctions if our captains wear the armbands on the field of play,” the teams said in a joint statement Monday.

Players wearing unauthorized attire could be shown a yellow card; a second yellow for any other foul could find them ejected from the game, putting their entire team in jeopardy.

“As national federations, we can’t put our players in a position where they could face sporting sanctions including bookings, so we have asked the captains not to attempt to wear the armbands in FIFA World Cup games,” the federations said in the statement.

The country’s ban on LGBTQ expression extends even to rainbows. CBS Sports journalist Grant Wahl said that he was refused entry at a USA-Wales match because his soccer-themed T-shirt had a rainbow on it. The rainbow featured seven stripes instead of the more common six-striped rainbow found on Pride flags.

Wahl is not out as LGBTQ and is married to a woman.

Just now: Security guard refusing to let me into the stadium for USA-Wales. “You have to change your shirt. It’s not allowed.” pic.twitter.com/TvSGThMYq8

Infantino did have a major supporter at Sunday’s news conference: FIFA’s director of media relations, Bryan Swanson, who is gay.

“I am sitting here as a gay man in Qatar. We have received assurances that everyone will be welcome and I believe everyone will be,” Swanson said. “I have a number of gay colleagues. I am fully aware of the debate and fully respect people’s opinions.”

Of Infantino, he added: “When he says we are inclusive, he means it.”

No player or coaching staff among the 32 men’s World Cup teams in Qatar is out.