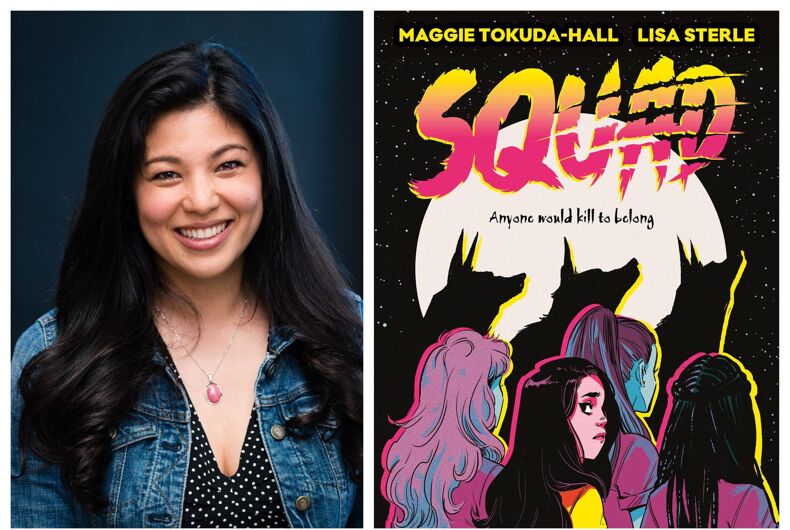 Maggie Tokuda-Hall and the cover of her graphic novel, Squad.Photo: Red Scott (provided)

Women who transform into werewolves and feast upon their male assaulters. A queer high school romance. Anger, redemption, and imperfect victims. All are themes readers will encounter in Maggie Tokuda-Hall’s young adult graphic novel Squad.

With both Halloween and the five-year anniversary of the Me Too movement, Squad’s subject matter is particularly timely.

Tokuda-Hall wrote the story for people who, like her, have survived sexual assault. She wanted it to look survivors directly in the eye and reassure them (in her words): “That was fucked up. You deserved better. And you’re right to be fucking furious.”

Through its portrayals of reactive rage, her work touches upon the important theme of the imperfect victim— a topic that the Johnny Depp Amber Heard case also brought to light recently.

“You can be a shit person, make bad choices, be an enthusiastic slut, get wasted at a party where everyone is getting wasted,” Tokuda-Hall states emphatically. “That doesn’t mean you deserve to be sexually assaulted. I don’t give a f*** what sins the victim has committed.”

Still, despite the violence present in the plot line, Tokuda-Hall makes clear during our exchange that she doesn’t believe in punitive measures such as the death penalty or the carceral state.

“It’s funny. I don’t mean for Squad to be an offering for some kind of better solution,” she explains. “I’m not a politician, not a policy wonk. Punishment for crime feels stupid when we create systems that constantly encourage them. I think what these girls are doing is wrong. I think they’re murderers. I love them, but they’re bad people.”

What jumped out to me when I read Squad was that it takes place at the high school the author and I both attended (several years after her), making many of the scenes familiar and recognizable.

Past articles I’ve written have described the internal struggle I faced as a queer kid while there, where it was common to hear “that’s so gay” and “stop being such a f*g,” thrown around in the hallways. Despite the presence of a GSA and one or two out gay classmates, it still wasn’t the coziest of places for LGBTQ kids (though few schools were in the early 2000s). I’ll never forget the sting of overhearing a girl seated behind me in the library one day commenting to her two friends that “lesbians scar[ed] her.”

Even outside school walls, back then, few, if any, books or movies featured LGBTQ characters. Tokuda-Hall, who identifies as bisexual, also noticed scant queer representation in books and movies growing up, so her inclusion of a queer relationship in Squad felt important.

LGBTQ Nation caught up with Tokuda-Hall to discuss narratives of compulsory heterosexuality, the influence that the film Jennifer’s Body’s had on Squad, and her next book (which she describes as just as queer, featuring hyenas this time).

Did you encounter any surprises along the way when writing Squad, or plot turns you decided to incorporate that hadn’t been a part of your original plan?

I had tried to write about my experiences in high school in a lot of ways, none of them supernatural. Piedmont High, where Squad is set, is a real place. A lot of the interactions within the book are real. But the idea to add the supernatural element was the last piece that came together, and as soon as I realized “werewolves,” I was on my way. I finished the first draft of Squad in a week. It took much longer to edit, but the feelings, the desire to tell that story, the arc of the story– that had all been in my mind for years before I sat down that week.

Were there any books, feminist thrillers, or horror movies that you drew inspiration from?

I like to tell people that Jennifer’s Body is Squad’s mom. I love the tone of that film. I love the way it calls attention to the absolute absurdity of sexism and rape culture with such a sharp sense of humor, with such powerhouse actresses at its heart. Megan Fox is a comedic genius, and that’s a hill I’ll die on.

Without Jennifer’s Body, there is no Squad. I needed to see that in order to see some of the same weird, strangely funny, hurtful things I experienced in high school reflected back at me in a way where the girls were empowered rather than solely victimized. I would never have been able to imagine Squad without having seen Jennifer’s Body.

I was also influenced by Naomi Alderman’s The Power, a fine, feminist, revenge fantasy novel on a global scale. Squad is more interested in the personal, but I feel like they share some opinions.

You mention you don’t believe in the carceral state or punitive measures. What point were you hoping to bring home by having the women turn into werewolves and eat their male attackers?

The harshness of it is to provide readers the sense of catharsis that we are always denied in reality. Someone came into our lives and did something monstrous to us, left us with monstrous consequences, and what happened to them? Probably nothing. Wanting to imagine a world where, for once, they paid in a way that felt as bloody and terrible as what they did to us feels good, even if it’s not really a viable solution. It’s about giving survivors the satisfaction of revenge, without actually murdering anyone.

I’d read that you had mentioned returning to visit Piedmont High since having published Squad. How does the climate seem to have changed since you were in high school? What would you have liked to see more of back when you were a student?

They are largely dealing with the same issues I was when I was there. Rape culture is still deeply entrenched, and people are still suffering the brunt of it. There’s a wonderful student lead group on campus called Piedmont for Consent. They would never have existed 20 years ago when I was there. So there’s been some progress. It’s just painfully, violently slow.

The nicest thing about going back to Piedmont High was that they had to pay me to be there. When I got that check, it felt like reparations for high school. I highly recommend becoming an author so that the institutions that most betrayed you in your youth will give you money to return for an hour at a time.

I’ve written for LGBTQ Nation about the importance of representation. Having characters’ sexual orientations woven in more casually helps normalize LGBTQ identities over time. Can you talk more about your experience with LGBTQ portrayals and representation in literature and movies growing up?

I will say, it was important to me for Squad to have a happy (if not healthy) queer romance in it, since I know, for me, the crushing weight of heteronormative sexual expectation is often what put me in my most dangerous situations as a young person. Because I was not brought up with the wealth of queer stories in the mainstream that exist now, queerness felt aberrant and distant. Something other people did, but not me.

It took me a healthy portion of my adult life to clear myself of that way of feeling. I’ve only been out as bi for about 7 or 8 years now. And so when I write for young people now, I like to provide queerness every time. There are enough cis-heterosexual stories, wonderful ones, already out there. I don’t need to contribute to that. I’m not interested in contributing to that. I’m interested in being emotionally honest, and part of that is the inclusion of queerness.

Any special plans for you and your family this Halloween?

My second child is due right then, so I imagine I’ll be in labor.

What’s on the horizon for you as an author?

The sequel to my debut young adult novel, The Mermaid the Witch and the Sea, comes out in 2023. It’s called The Siren, The Song and the Spy and it’s just as queer as the first book, but this time with hyenas.

Is there anything else you would like LGBTQ Nation readers to know?

Watch Jennifer’s Body. Also Our Flag Means Death. It’s not relevant to Squad. I just like it.