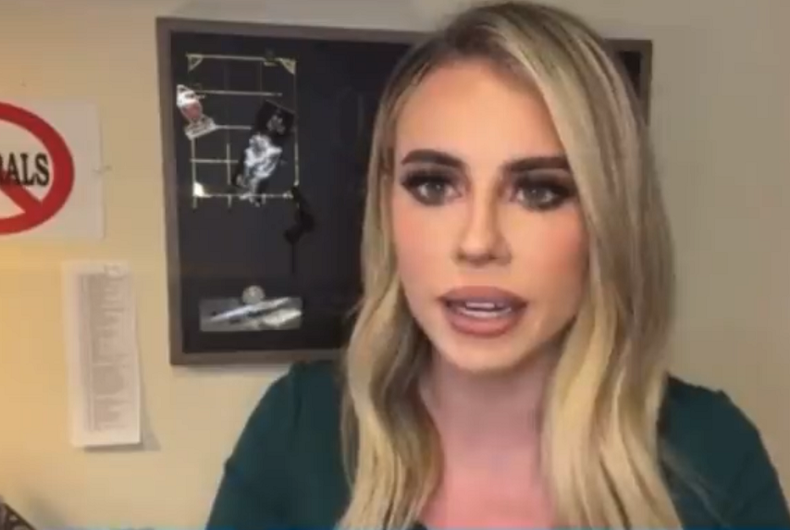 A conservative pundit said that Miss Universe contestants should be afraid of participating in the pageant now that it’s owned by a transgender businesswoman, saying that there will be “pedophile activity” at the pageant now.

Alison Steinberg of the OAN show Alison at Large made the accusation while discussing how Thai tycoon Jakapong Jakrajutatip just bought the pageant, which was once owned by Donald Trump.

“It’s just pathetic,” Steinberg said, misgendering Jakrajutatip and referring to her as “it” and “he.”

“These people obviously know that that’s not actually a woman. They’re delusional, they’ve convinced themselves that it is. And then they send all this praise his way.”

“I’m so sick of the BS here. Just admit that it’s a man, there’s nothing special here. It’s actually more concerning that a man who dresses as a woman owns it.”

“And all of the women who enter the contest should be concerned, because this is clearly… You know, probably pedophile activity going on behind the scenes.”

Her interlocutor, Real America host Dan Ball, called for contestants of the pageant to boycott it.

On OAN, they are calling for contestants to boycott the Miss Universe pageant after a trans woman bought it: “Women who enter the contest should be concerned. Probably pedophile activity going on behind the scenes.” pic.twitter.com/ZLVi5BZimF

Trump sold the Miss Universe pageant, which has welcomed transgender contestants for a decade, to media giant IMG in 2016 after owning it for 20 years. Last week, it was announced that IMG sold the pageant to Jakrajutatip.

“We are incredibly honored to be acquiring the Miss Universe Organization and working with its visionary leadership team,” she said in a statement. “We seek not only to continue its legacy of providing a platform to passionate individuals from diverse backgrounds, cultures, and traditions but also to evolve the brand for the next generation.”

While Steinberg is suddenly concerned about the safety of contestants now that a transgender woman owns the pageant, Trump was accused by four women of walking into the dressing room while contestants were changing at the 1997 Miss Teen USA pageant. Some of the contestants were as young as 15 years old.

“I remember putting on my dress really quick because I was like, ‘Oh my god, there’s a man in here,’” Mariah Billado, the former Miss Vermont Teen USA, told Buzzfeed News.

She said Trump responded, “Don’t worry, ladies, I’ve seen it all before.”

What if women could turn into werewolves & feast upon their assaulters?