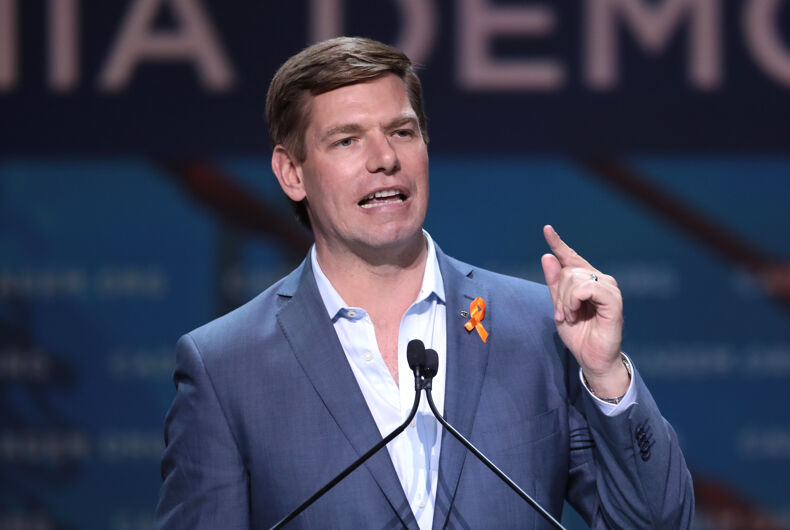 A Pennsylvania man has pleaded guilty to making death threats to Rep. Eric Swalwell (D-CA) and members of his staff.

Joshua Hall, 22, pleaded guilty to one count of making interstate communications with a threat to injure and faces a maximum sentence of five years in prison.

He had previously pleaded guilty to charges of wire fraud in relation to a fake fundraising organization, Gay Voices for Trump. Hall admitted to impersonating Trump family members on social media, including the former president’s son Barron and late brother Robert, in an effort to defraud donors.

In a statement, U.S. Attorney Damian Williams of the Southern District of New York said that Hall had “made terrifying threats to the staff of a United States Congressman whom he disliked rather than attempting to effect change through any of the freedoms of expression that all Americans enjoy. These threats of violence endanger our public officials and thwart common decency.”

According to a Justice Department release, “On or about August 29, 2022, HALL placed a series of telephone calls from in or around Yonkers, New York, to the California office of a member of the United States Congress (the “Congressman”).  During those telephone calls, HALL conveyed threats to kill the Congressman to at least three different members of the Congressman’s staff.”

In late August, Swalwell revealed that he and his staff had been the targets of threatening phone calls from someone claiming to be a gay conservative.

“A staffer of mine — who’s 1 month into her job — received a call from a man saying he’s coming to our office w/ an assault rifle to kill me,” Swalwell tweeted at the time. “I hesitate to share this but how else do I tell you we are in violent times, & the architects are Trump & [House Minority Leader Kevin] McCarthy. Bloodshed is coming.”

According to the memo shared by Swalwell, the caller ranted about “gay issues” and “said he is a gay man, but he doesn’t take it up the ass he gives it.” The man “used the F slur several times” to describe other gay men.

“I hesitate to share this but how else do I tell you we are in violent times, & the architects are Trump & McCarthy. Bloodshed is coming,” Swalwell warned just months before the husband of House Speaker Nancy Pelosi (D-CA) was attacked and beaten with a hammer in the couple’s home by an intruder who was looking for the speaker.