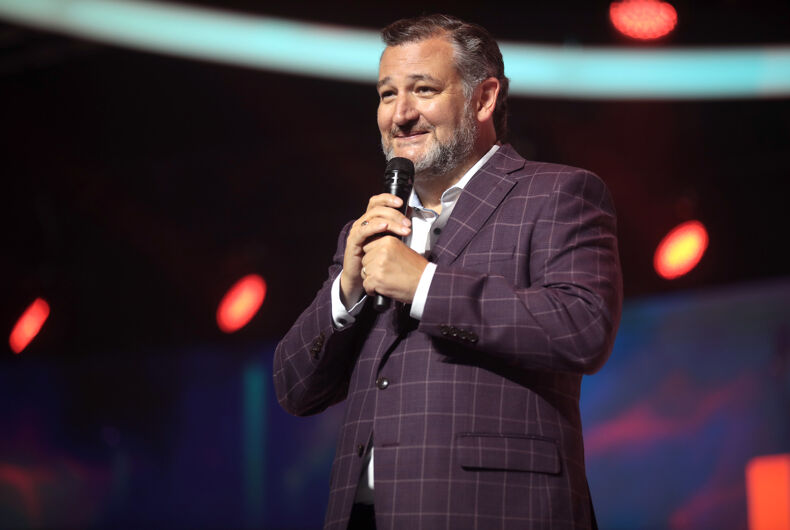 Sen. Ted Cruz (R-TX) lashed out at liberals who criticized him for sharing a fake article on Twitter that implied that the left wants to be “teaching pornography” to children in schools, saying that “it could easily have been real.”

On Friday, Cruz tweeted a story with the fake headline “The Evolution of White Supremacy” and the subheading “In Dearborn Michigan, Muslim parents who oppose teaching pornography to children become the new face of the far right.”

The Atlantic never published a story with that headline, and the author that appeared in the doctored image – Abby Ohlheiser – hasn’t worked at The Atlantic for years.

“The Left is beyond parody,” Cruz wrote while sharing the image with his 5.3 million followers.

Cruz later deleted the tweet after people pointed out that it was fake, without apologizing to Ohlheiser.

“It’s for sure good and normal to wake up to dms calling you a groomer because some maga shitposter photoshopped your byline onto a fake article for a publication you haven’t worked for in a decade,” she said, explaining how the fake headline led to harassment.

“the past 24ish hours have been a Bad Time Online for me,” she later tweeted.

It took more people pointing out that Cruz never acknowledged that he posted a fake headline, never apologized for it, and never attempted to set the record straight, and when he finally acknowledged it he blamed others instead of taking responsibility for his inability to distinguish fact from fiction.

“Didn’t know it was fake. You guys are so insane, it could easily have been real,” he wrote. “But it wasn’t. And so I deleted the tweet as soon as I found out.”

Didn’t know it was fake. You guys are so insane, it could easily have been real.

But it wasn’t. And so I deleted the tweet as soon as I found out. https://t.co/5vD8OYJgDr

People called him out for refusing to apologize to Ohlheiser.

Also, go apologize to the person you smeared.

Did you not learn how to check claims for factual accuracy at Harvard Law School?

Are you going to apologize for the threats and harassment you unleashed? https://t.co/Ku8HjU16Wh

Didn't know it was fake. You are so insane it could easily have been real. pic.twitter.com/HDmeXHe7PL

Seems like a good use of your time and our tax dollars. https://t.co/IrcDwHTHRS

The fake article was ostensibly referring to Muslim parents who protested a school board meeting in Dearborn, Michigan last week. The parents carried signs that said “Keep Your Dirty Books in the Closet” and “If Democracy Matters, We’re the Majority” as they demanded the school district ban books by LGBTQ authors.

Unlike the fake story Cruz shared, no one was protesting “teaching pornography to children” in schools – they were protesting books by LGBTQ authors.

Moreover, no one is saying that “Muslim parents… become the new face of the far right”; Dearborn is one of the few cities in the U.S. with a large Muslim community and the vast majority of protests about LGBTQ themes being discussed in schools this past year have been coming from conservative Christians.