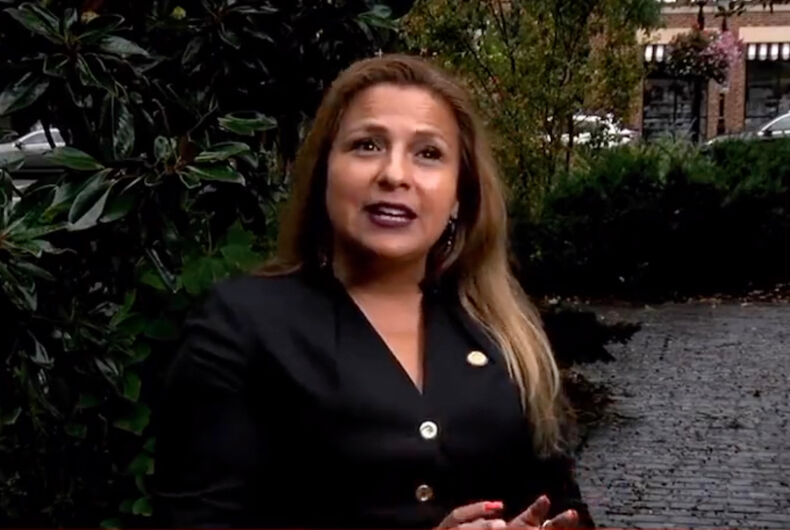 A Virginia lawmaker is facing backlash for suggesting she would re-introduce a bill aimed at protecting LGBTQ children from abuse.

In an interview with Washington ABC affiliate WJLA last week, Virginia state Delegate Elizabeth Guzman (D) said she planned to reintroduce H.B. 580, which she originally introduced in 2020, in response to Republican Gov. Glenn Youngkin’s recently proposed model education policy that would roll back protections for transgender students in schools.

“The day that Gov. Youngkin wanted to implement this policy, I immediately texted the policy lead of that committee and said, this is how we’re going to push back,” Guzman said.

The legislation, Guzman said, would expand the state’s definition of child abuse to include inflicting “physical or mental injury on the basis of the child’s gender identity or sexual orientation.”

But the report by the Sinclair Broadcast Group-owned WJLA characterized the bill as criminalizing “parents who do not affirm their child’s gender identity or sexual orientation.”

In a tweet thread posted after the WJLA report aired, Guzman said the station had mischaracterized the bill. As The Washington Post notes, the word “affirm” is nowhere in H.B. 580.

“The 2020 bill was a child safety bill that would have simply protected children from ‘physical or mental injury on the basis of the child’s gender identity or sexual orientation,’” Guzman tweeted. “The way the bill was presented in the article was patently wrong.”

🧵As a social worker & mom of 4, I will always fight to protect LGBTQ children from abuse. 🧵 to set the record straight on a misleading news piece from a Sinclair-owned affiliate that mischaracterized a pro-safety, anti-abuse bill I introduced in 2020 to protect LGBTQ youth. 1/

“Are you saying non-affirming parents are committing abuse against their children if they don’t affirm their gender identity or sexual orientation?” Minock asks in the interview.

“No, I’m not saying that,” Guzman responds.

Republicans, however, pounced on the original story. Virginia’s Republican Party tweeted that the state’s Democrats “want to set the POLICE on you and charge you with a FELONY if you refuse to give your kids puberty blockers and irreversible sex change surgery.”

🚨PARENTS🚨 @vademocrats and @guzman4virginia want to set the POLICE on you and charge you with a FELONY if you refuse to give your kids puberty blockers and irreversible sex change surgery.

RT to spread awareness about their radical scheme. https://t.co/keQZMVNmnL

“Utterly horrifying,” tweeted Sen. Ted Cruz (R-TX) along with WJLA’s original report. “These zealots think they are your children’s parents, and they’ll put you in jail if you disagree.”

Cruz was caught sharing other fake news this weekend and has refused to apologize.

These zealots think they are your children’s parents, and they’ll put you in jail if you disagree. https://t.co/Rz0pTpNssf

Virginia Democrats also rejected the idea of reintroducing the bill. In a statement, U.S. Rep. Abigail Spanberger (D-VA) said that she does not support the legislation. “It’s unclear how this proposed legislation intends to actually help transgender children and their families, which is what we should focus on.”

Virginia’s House Minority Leader Don L. Scott Jr. (D) said that if the bill were introduced “it would be dead on arrival.” Scott also said that Guzman who told him that her comments had been taken out of context and that she has no intention of introducing the bill.