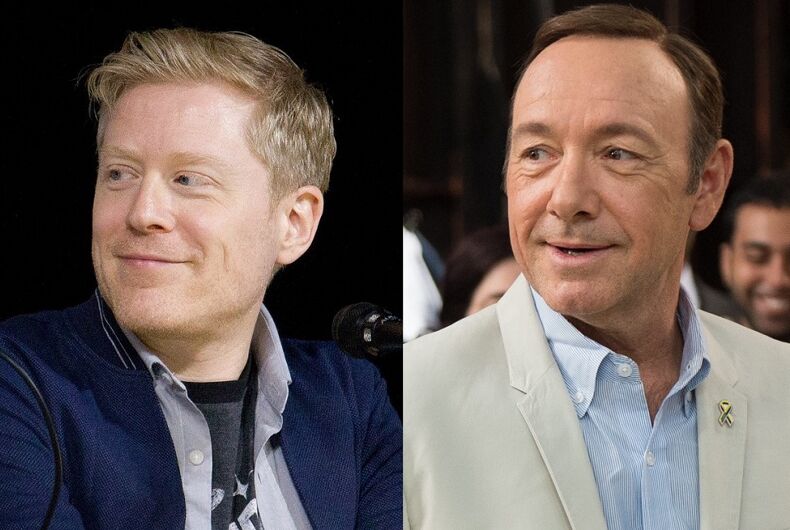 Attorneys for Anthony Rapp and Kevin Spacey delivered opening statements Thursday in the first round of Rapp’s civil suit against Spacey.

“What happened to Anthony is something that never should have happened,” Rapp’s attorney, Peter Saghir, told jurors, showing them a photo of the Star Trek: Discovery star taken in the summer of 1986 to illustrate just how young he looked at the time. “The conduct here involved a 14-year-old boy and a 26-year-old man.”

In 2017, Rapp publicly accused Spacey of drunkenly making a pass at him in 1986 when Rapp was 14. He alleges that Spacey fondled his buttocks, lifted him onto a bed, and pinned him down, laying on top of him. Rapp sued Spacey in 2020 for assault, battery, and intentionally inflicting emotional distress.

Spacey’s attorney Jennifer Keller, meanwhile, tried to cast Rapp as resentful of Spacey’s career and embittered by the fact that the House of Cards star had remained closeted.

“When he’d see Kevin Spacey winning an Oscar, he’d become enraged. When he’d see him getting another Oscar, he’d become enraged. When he’d see him winning a Tony, he would be upset,” Keller said. “You’ll hear that he’s been telling this story for attention, for sympathy, and to raise his own profile. Because while Anthony Rapp has made a living as an actor, a working actor, which is not an easy thing to do, he never became the international star that Kevin Spacey is, who could play almost any role — comedic, dramatic, sang, danced. He has been simmering, simmering with resentment all of this time.”

Notably, Spacey has not publicly denied Rapp’s allegations, stating instead that he does not remember the encounter. In a 2017 tweet, Spacey wrote, “If I did behave then as he describes, I owe him the sincerest apology for what would have been deeply inappropriate drunken behavior, and I am sorry for the feelings he describes having carried with him all these years.”

Numerous other accusers came forward following Rapp’s story. In May, Spacey was charged by the U.K.’s Crown Prosecution Service with four counts of sexual assault and one count of “causing a person to engage in penetrative sexual activity without consent.” The alleged incidents took place in London and Gloucestershire between 2005 and 2013. The trial is set to begin in June.

GOP candidate claimed rabbis agree that abortion is as bad as the Holocaust. He couldn’t name one.