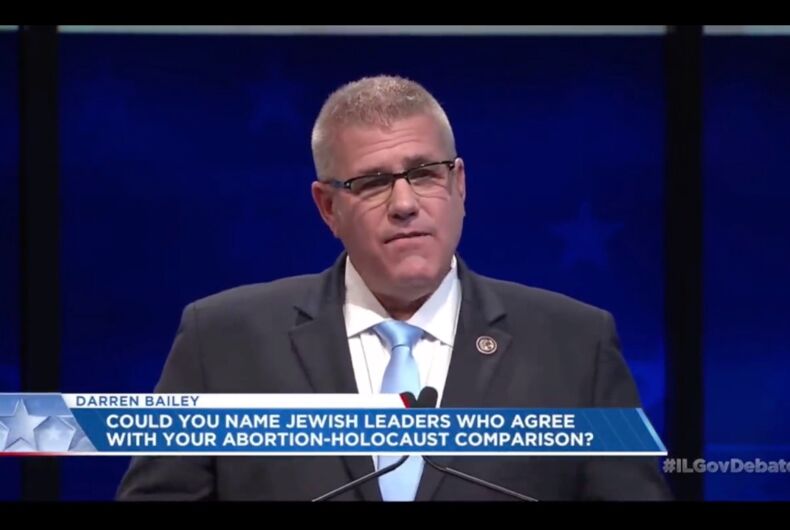 A gubernatorial candidate who once claimed that Jewish leaders agreed with his claim that abortion is as horrific as the Holocaust refused to name any leaders who allegedly felt that way.

“You know, the attempted extermination of the Jews in World War II, it doesn’t even compare on a shadow of the life that has been lost with abortion since its legalization,” Illinois state Sen. Darren Bailey (R), who is challenging Illinois Gov. J.B. Pritzker (D), could be heard saying in a Facebook video from 2017.

The video became the subject of an attack ad run by the Pritzker campaign calling Bailey “too extreme for Illinois.” Bailey responded to criticism in August by claiming that Jewish people agree with him that abortion is worse than the Holocaust.

“The Jewish community themselves have told me that I’m right,” he said on WSPY-FM.

In September, he was again pressed about the video, and he now claimed that unnamed “Jewish rabbis” agreed with him.

“All the people at the Cabads that we met with and the Jewish rabbis, they said, ‘No, you’re actually right,'” he said, possibly referring to Chabad, a Jewish religious movement.

But when asked at the debate this week to name Jewish person who actually agreed with his comparison, he refused.

At first, Bailey danced around the question  his beliefs.

“The atrocity of the Holocaust is beyond parallel. Those statements were made five years ago when [former Republican Illinois] Governor Rauner signed into law taxpayer-funded abortion. So yes, the facts are true when you compare the numbers. Spewing that out of control like the liberal press has done is actually a shame.”

But the moderator pressed him and asked again for him to name any Jewish leaders that agreed with him.

“No.” Bailey declared. “I’m not gonna put anybody on record.”

GOP gubernatorial candidate Darren Bailey said Jewish leaders "told me that I'm right" that abortion is as bad as the Holocaust.

Moderator: "Could you name the Jewish leaders who agree with you?"

Pritzker recently released a scathing ad attacking Bailey for allegedly teaching kids to hate at the Christian school he runs.

Bailey founded Full Armor Christian Academy in 2016, a preschool through 12th-grade school that says it teaches kids “the courage to act upon Christian values and beliefs.”

The school uses a curriculum developed by the far-right Bob Jones University that’s so extreme it teaches that gay people are the moral equivalent of child molesters and that most slaveholders treated slaves well.

The school, according to Pritzker’s new ad, says that Full Armor Christian Academy teaches that “women in the workforce have been harmful to America” and that “evolution isn’t real.”