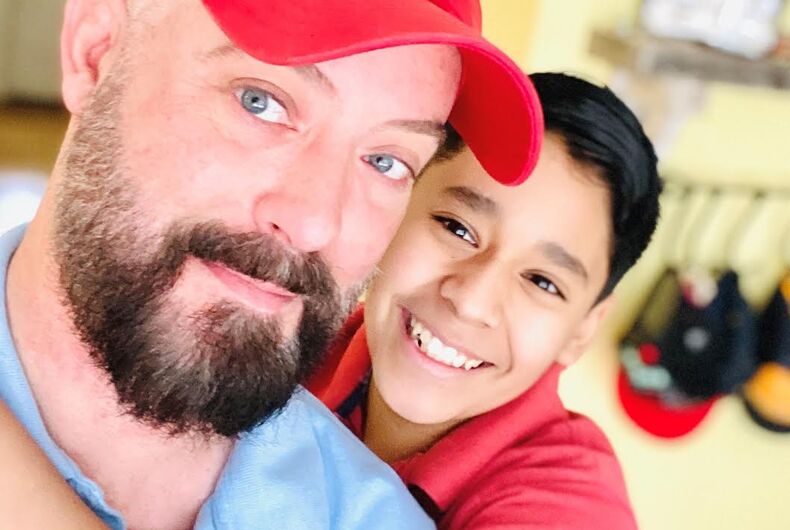 “The goal was always Thanksgiving,” says homeless youth advocate Joe Barb, of the opening date for the new drop-in and community center in South Dakota he’s been shepherding for the last two years. “Because I remember during the time period that I didn’t speak with my family, due to the rejection, that I spent those holidays alone. And I don’t want that for anyone else.”

Barb is the “mover and shaker,” according to husband Lambert Miller, behind The Circle, a collaboration with homeless and underserved youth, local community organizations, and government agencies that aims to serve and house as many homeless Rapid City, South Dakota youth as possible, a number that will grow to over 2000 as winter sets in across the Great Plains. The center is scheduled to open in November.

Two years ago Barb and Miller were at their barber in Maryland when they met “a very broken trans youth who had difficulty finding support,” according to Barb, “especially during COVID. So I called every professional friend that I knew, who, you know, ran Sheppard Pratt, ran Johns Hopkins,” both world-renowned hospitals in the area, “to see if I could find this young person support. And what I was finding wasn’t targeted support for LGBTQ youth. Or the targeted support was by organizations that didn’t have LGBTQ representation within their staffing, which was concerning to me.”

While the couple managed to find that particular youth the help he needed, Barb decided on the spot that the world needed a non-profit organization run by and for kids in similar circumstances, with support from LGBTQ staff and professionals who understood their circumstances best.

“You can’t fully understand what a trans youth or an LGBTQ youth goes through if you’ve never experienced that. You could be empathetic, possibly. You could listen, but you have to have representation in order to design services.”

While services with representation were lacking in Maryland, they were non-existent in South Dakota, which Barb called home after he arrived there homeless in his late teens.

“When my parents found out that I was gay, it did not go well,” says Barb, “and I ended up coming to the last place we went on vacation together as a family that I enjoyed.”

Barb and Miller decided to sell their house and use the money to go all in on Barb’s idea, in a place that could use it most.

The two men quit their jobs and moved west. While Miller brought home a paycheck, Barb dove in full-time to making The Circle a reality.

It started with a federal grant from the Department of Housing and Urban Development (HUD).

“HUD had released a Notice of Funding, basically to address youth homelessness, and I noticed they specifically said LGBTQ youth should be part of the conversation and solutions, since such a large percentage of youth experiencing houselessness are LGBTQ,” says Barb. “I immediately was like, ‘Hey, I’m gonna get involved in this with the state,’ so then we started working with the South Dakota Health Authority.”

Barb pulled in the Youth Action Board, comprised of 13- to 24-year-old members who “had the power to decide how that money was spent and how it addressed youth homelessness within the state.” He organized regular meetings of the group and together they came up with an action plan.

“They wanted things like a drop-in center, they wanted transitional housing.”

The also wanted The Circle to be inclusive. “People thought that we would have only LGBTQ-specific targeted services, and the kids were like, ‘No, we don’t want to be separated based on identity. We want to be affirmed based on identity. And we would like our friends who don’t identify as LGBTQ to be part of the plan, too. They should be housed also, they should have the same supportive services. So please make this inclusive because that’s what we’re asking of our community, to be inclusive of us.'”

The stakeholders settled on an 8000 square-foot former church in Rapid City to house the facility, with a kitchen and plenty of space for community meetings, activities and the services they’ll offer, like physical and mental health programs, and substance abuse and career counseling, among others. Transitional housing will follow in stages.

But, says Barb, “no one organization can do everything.”

“We educated and partnered with other organizations to make sure that, in a full service capacity, youth could be supported,” Barb says. “I created an LGBTQ competency and education program with the Youth Action Board and said, ‘Okay, what do we need them to learn? What do we need them to know on how to work with us as LGBTQ people? And what things need to be addressed uniquely for our identities?’ And the youth helped create all that, and in doing so, we educated a lot of service providers.”

Speaking of his own experience with family rejection, Barb says, “It took some years to repair the relationship but we did. And it, you know…” Barb pauses. “Everything in my journey was reflective of what I see with youth today. That family rejection is a huge component, and without a support system, youth are less likely to thrive… That’s where the name of The Circle came from. The whole idea and concept was to encircle youth and young adults, and make sure they were supported.”

“It has stressed him out to the max at times,” says Miller, speaking from the couple’s kitchen in Box Elder, outside Rapid City, which they share with Barb’s 13-year-old son. “But even through all that, he’s never lost sight and the belief that this could happen, and that this is a good thing for the youth, the young adults that are here that don’t have anybody that will do anything for them.”

“I can’t say enough about how proud I am of what he’s done, what he’s accomplished in what little bit of time we’ve had,” says Miller. “He just doesn’t take ‘no’ for an answer.”