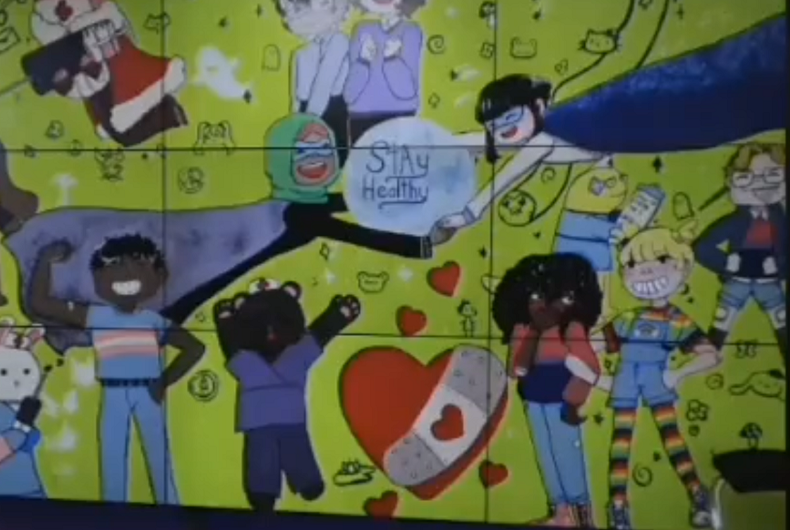 Between 80 and 100 people attended a school board meeting last night in Grant, Michigan, and most were angry about one thing: a student’s painting that included some LGBTQ pride flags and symbolism they called “Satanic.”

“I feel like [the student] did a really good job finding excuses to defend the things you put on,” one adult said at the meeting. “None of us are that stupid.”

At issue is a mural by Grant High School student Evelyn Gonzales at the Child and Adolescent Health Center at Grant Middle School that was painted over the summer.

The mural shows kids and animals wearing red cross hats. The kids have diverse skin colors and one is wearing a hijab. One girl in the mural is wearing rainbow colors. Another student is wearing a transgender flag shirt while getting a shot from a bunny nurse. And two kids are wearing bisexual pride flag colors – pink, blue, and purple.

In the background are some symbols like a letter, stars, a peace sign, a mushroom, butterflies, and the Hamsa hand, also known as the Fatima hand, which is a symbol of good luck in North African and Middle Eastern – as well as Latin American – cultures.

“I put my art up there to make people feel welcome,” Gonzales said.

But adult Nate Thompson said that the mural discriminated against Christians and that it was “hate material.”

Local mother Tracey Hargreaves went to the meeting to defend the mural.

“I am a conservative, right-wing, gun-loving American,” she said at the meeting. “And I’ve never seen more bigoted people in my life.”

“The meeting turned into a hate fest. Usually, there are 10 people at these meetings, 50 showed up. It wasn’t even about the mural,” Hargreaves later told TODAY.com. “People were talking about how we need to pray the gay away.”

“I had to stand up and say something,” she said. “It was out of control. You can’t catch gay, honey. It’s not contagious.”

The student who painted the mural “tried to explain herself, but no one would listen. They were convinced that the Hand of Fatima… was Satanic.”

Some of the parents said that it was demonic while others said it was “witchcraft.”

Other adults at the meeting objected to another background symbol, that of a video game character that they said was a demon.

“We just want a neutral place for our kids,” one parent told WOOD-TV. “We don’t want our kids being politicized.”

“Our kids should have neutral places where everybody feels loved and accepted and there doesn’t need to be anything on the wall that causes any sort of division,” said another.

Lori Donati works at the clinic where the mural is displayed. She said that the student included Pride symbols because her friends have been bullied at the school.

Donati said that the angry parents were a small, vocal group of conservative Christians who “made it very negative and all of us were upset. It was very attacking.”

Grant Public Schools said in a statement that the background images weren’t a part of the student’s original proposal for the mural, so some of them – like the video game character face – will be removed. The student’s father said that she put in those background symbols because the mural was bigger than she had anticipated and she wanted to fill in the empty space.

But GPS said that the Pride symbols will stay, since they were a part of the original proposal.

“At Grant Public Schools, we are committed to promoting civility, respect, understanding and inclusion,” the statement said. “We do not condone, and we will not tolerate discrimination, harassment or bullying whether in word, deed or on social media.”

Grant Michigan is getting a taste of old fashioned Christian "love" as a mural painted in the teen health center of Grant middle school causes outrage over it's depiction of LGBT youth, & symbols throughout the painting.