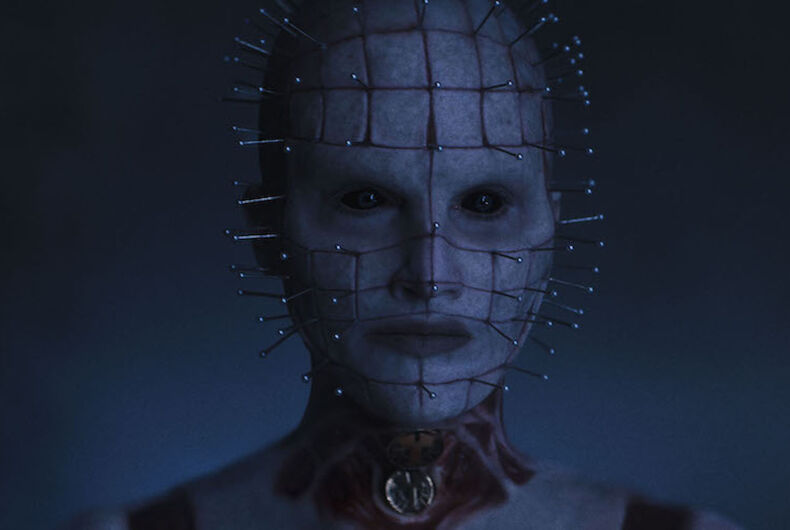 Some fans worried about a woman playing a male villain, especially since the role was first made iconic by male actor Doug Bradley. But the 1986 novella that Hellraiser was based on, entitled The Hellbound Heart, actually depicted Pinhead as somewhat androgynous, a fact that the film and its many sequels seemingly forgot.

The 1987 Hellraiser and The Hellbound Heart both show the cenobites, an order of mutilated hell priests who are summoned to Earth through a mysterious puzzle box known as The Lemarchand Configuration. The cenobites find pleasure in sensuously inflicting pain through extreme bodily and psychological torture, particularly through the use of hooked chains. Their own bodies are pale and have exposed muscle and bone — horrific disfigurements also caused through torture.

But while the 1987 film and its 1988 sequel established Pinhead as a former military officer who was definitely male, the novel mostly refers to the cenobites as “sexless things with their corrugated flesh” and “queer deformity.”

The novella specifically says of Pinhead, “Its voice, unlike that of its companion, was light and breathy — the voice of an excited girl. Every inch of its head had been tattooed with an intricate grid, and at every intersection of horizontal and vertical axis a jeweled pin driven through to the bone. Its tongue was similarly decorated.”

The credits of the 1987 film refer to its four cenobite characters as the “Lead cenobite” (Pinhead), the “Chattering cenobite” who has their lips pulled entirely around their face, the plump “Butterball cenobite,” and the “female cenobite” who is the only cenobite in the novella who has female body parts and female pronouns. The rest are referred to as “it.”

Why Hellraiser is considered a queer horror film

Hellraiser has since become a queer horror classic for numerous reasons, according to Riley Wade of Horror Obsessive. The work’s gay author/director has been hailed as a master of the counter-cultural “splatterpunk” literary genre. His work casted off horror’s usual slasher and haunted house tropes, creating a tale of sex and violence inflicted by the ultimate queer outcasts: literally genderless beings who were banished to hell.

The novella and film follow a bored wife who murderously lusts after her husband’s degenerate brother with whom she had an affair, a knock against humdrum domestic heterosexuality, Wade wrote. Barker’s film and story both show men and women feeding off of same-sex victims in order to regain their human forms, a nod to the homoeroticism of early vampire tales.

“It’s this antinormative sexuality that Hellraiser does not condemn but instead generates, presenting a diversity of sexual exploration not confined to the normative throes of sweaty-man-upon-sweatier-woman, breasts buffeting the camera,” Wade continues.

It could be that Barker made Pinhead a male in his film adaptation as a counterbalance to the fact that the first two film’s main heroes are all women. But it’s unclear what all factored into the original casting decision.

To his credit, Bradley (the actor who played Pinhead in seven of the 10 current Hellraiser films) told Bloody Disgusting, “I do like to point out that I did wear a skirt as Pinhead. We say ‘female Pinhead’ like we know what that means, but there are a million shades of femininity […] Everything about Hellraiser has always been transgressive.”

Clayton herself said, “I wanted to bring something completely new and fresh to the character. I didn’t want anybody to compare my performance to previous performances, which I think is why they wanted to cast a woman. It takes the burden off the audience because it makes the comparison harder…. I stayed in therapy the whole time we were filming. It was dark!”

“Doug’s performance is so iconic and so incredible and nuanced in all its own ways, we knew that we couldn’t rip it off,” Bruckner told Entertainment Weekly “Like, you can’t do an impression of Doug; it’s not going to work.”

Clayton had previously acted in Sense8, The L Word: Generation Q, Designated Survivor, The Snowman, and The Neon Demon. But in her Hellraiser audition, she showed a different, more sensual side of Pinhead.

“We needed a different voice, and we didn’t know what that was; we didn’t know how to get there necessarily, so we looked at a lot of people, and from the beginning, Jamie had this sensuality; she was expressing the desires of the [character] in a way that maybe was a little counter to Doug’s reservation,” Bruckner continued.

“She was revealing [herself] more, and there was intrigue and curiosity, and she didn’t outwardly try to intimidate so much as be this kind of silky evil presence. Like, she’s sexy, I’m drawn to her, she’s beautiful, yet at any given moment, she might throw [deadly hooked] chains at my head,” the director said.

Far from just being a case of gender-swapped casting, Clayton’s portrayal of Pinhead may help bring the villain somewhat back to its more genderless origins. The addition of other queer characters in the modern remake will also ensure that Hellraiser becomes a noteworthy standout in the queer horror pantheon.